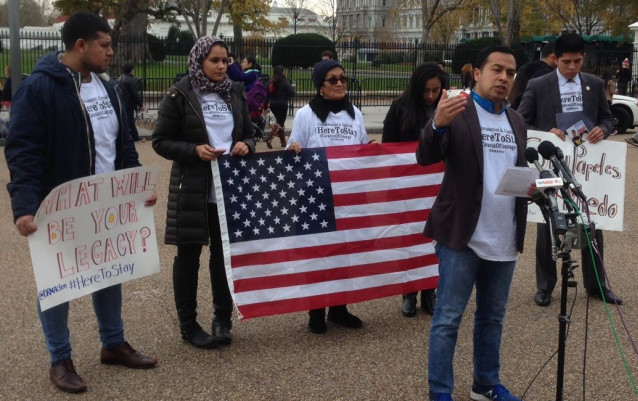 Above photo: Cesar Vargas, an attorney with the Dream Action Coalition, speaks at Thanksgiving Day press conference in front of White House./Photo by Kevin Thomas.

Washington, DC – Undocumented immigrants and their allies traveled this week from Trump Tower in New York City to the White House in Washington, DC, as part of a movement called “Caravan of Courage” to demand action from President Barack Obama and President-elect Donald Trump.

The Dream Action Coalition, a New York-based advocacy group, organized the march in the wake of Trump’s election and as Obama’s presidency, which has seen a record number of deportations, enters its final weeks. On their trip from Trump Tower to the White House, the group made stops along the route to support other activists, including organizers against a U.S. Immigration and Customs Enforcement (ICE) detention center in Philadelphia.

“We have marched to meet with immigrant communities along the way in Pennsylvania, Maryland and New Jersey to demonstrate one message very clear: that we are undocumented, unafraid and we are here to stay,” Cesar Vargas, an attorney with the Dream Action Coalition, said at a press conference in front of the White House on Thanksgiving Day. “Today is Thanksgiving. Millions of families are spending the day with their families at the table. But the reality is that millions of other American families have their loved ones in private detention centers where private corporations are profiting at the expense of the taxpayers, at the expense of our immigrant and American families.”

The Obama administration, with the backing of both Democrats and Republicans in Congress, has detained and deported a record number of undocumented immigrants. “We had high hopes for President Obama, but he has detained the most immigrants than any president in American history,” Vargas emphasized. “What is his legacy as he leaves office? Will he be the Deporter-in-Chief? Or will he be the champion that keeps families together? That’s his decision.”

The Dream Action Coalition works to establish local, state, and federal policies that secure fairness for the diverse immigrant community without discrimination based on immigration status or national origin. Dream is an acronym for Development, Relief and Education for Alien Minors, or the DREAM Act, legislation that would grant undocumented immigrants residency upon meeting certain qualifications. The legislation, first introduced 15 years ago, has yet to pass Congress. In 2012, Obama announced that his administration would stop deporting young undocumented individuals who meet certain criteria previously proposed under the DREAM Act.

At the Nov. 24 press conference, Vargas highlighted four areas where Obama still can help immigrant communities in his final two months in office.

Sal Montes, an immigrant rights activist from Dutchess County, NY, passionately spoke of the struggle facing immigrant families: “Those who do not know our pain tonight be thankful that you don’t have to be here like we are. Be thankful that you are not in our shoes and that you will never feel the fear or see the fear in your friends and families,” Montes said. “But do not forget that your ancestors were once in our shoes as immigrants felt what we’re feeling right now.”

With the election of Donald Trump as president, the nation has seen an increase in anti-immigrant rhetoric and violence against communities of color. “We’re not going to tolerate that. That’s why we march, to send that strong message. This is the country that we call home and we’re not going to let fear dictate what we’re going to do in the next four years,” Vargas said.

Vargas, who came to the United States when he was five-years-old, graduated from law school and became the first undocumented attorney in New York State.

The Dream Action Coalition has requested a meeting with Trump, according to Vargas, so the president-elect can “see the human side of a broken immigration system than many people don’t see.” Vargas said the group wants the United States to get rid of a “dragnet where innocent, hard-working immigrants are caught up in a system that is broken and outdated.”