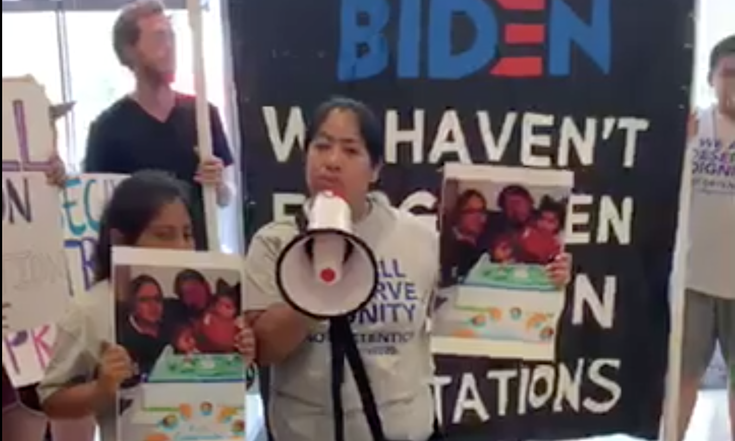 Note: Cosecha protested Biden for his role in deporting 3 million people during the Obama administration in New Hampshire and Philadelphia. They are asking him to apologize for these mass deportations. Below is a press statement from Cosecha regarding the confrontation with Biden in New Hampshire. KZ

At Joe Biden’s first campaign event in New Hampshire this week, Biden was confronted by an undocumented immigrant an asked for an apology for the nearly 3 million deportations under the Obama administration and if he would commit to ending all detention and deportation if elected on Day— video linked here.

Dover, NH – In response to continued public outrage of family separation, dozens of allies joined immigrant leaders in confronting former Vice President Biden at a campaign event in Dover, NH, this afternoon in order to make it clear that we have not forgotten the three million deportations that happened under his watch. Biden was confronted by Nelson, an undocumented immigrant from Guatemala who spoke about his brother who was detained under Obama in 2016 and later deported. In May of this year, just two months ago, Nelson was detained and separated from his 3-year-old daughter.

This comes after protest Cosecha held this past Wednesday (July 10), when impacted immigrant families with Cosecha stormed Biden’s Campaign Headquarters in Philadelphia to demand that he apologizes for the three million deportations he was complicit to under the Obama administration. Cosecha unveiled their Dignity Plan, demanding that all presidential candidates, if elected, commit to use their executive power to halt all detentions and deportations, develop a family reunification program for those deported during the Trump and Obama administration, and provide immediate legalization for the 11 million undocumented immigrants in the United States of America.

In response to our questioning, Biden said he would not apologize for those with felony charges, but let’s be clear that the Obama/Biden Administration had a choice and they chose to reinforce policies designed to criminalize our community. Ramping up the use of felony charges to expedite deportations on mothers and fathers trying to reunite with their families.

In his comments Biden justified deportations. But we know that any and all detention and deportations are a manifestation of family separation. We will not forget that the Obama Administration promised to legalize the undocumented immigrant community but then deported 3 million family and community members. We will continue fighting with our resilient immigrant community to live a life where we do not live in fear or under the stress of being separated from our loved ones.

Movimiento Cosecha wants the former VP to apologize for the 3 million immigrants deported during Obama’s presidency.

Six participants in a sit-in at Joe Biden’s Centre Square campaign headquarters in Center City were arrested Wednesday afternoon, after hours of protests and demands for an apology from the former vice president of the United States.

Movimiento Cosecha, an immigrant rights advocacy group, organized the sit-in protest at Biden’s headquarters and was seeking an apology from the Democratic presidential hopeful for the deportation of 3 million immigrants during President Barack Obama’s presidency.

Families are calling for @JoeBiden to apologize for the 3 million family separations he oversaw while in the White House, and commit to using his executive authority to end all detention and deportation on day one if elected President.

California senator and presidential candidate Kamala Harris, however, claimed that Obama’s policies allowed the deportation of people “who, by (U.S. Immigration and Custom Enforcement)’s own definition, were non-criminals.”

Much of the recent conversation around immigration policies and immigrant detention has focused on President Donald Trump’s administration, but Movimiento Cosecha’s demonstration Wednesday was intentionally focused elsewhere.

“Opposing Trump’s policies and returning to a status quo of silent deportations is not good enough,” the group said Wednesday on Facebook. “We must start a conversation about what dignity for immigrants really looks like.”

The idea behind Movimiento Cosecho’s sit-in Wednesday, the group said, was to remind the public, and press Biden, about the deportation of non-criminal immigrants.

Happening now: Allies are being threatened with arrests at @JoeBiden‘s campaign headquarters in Philadelphia after immigrant families shut down the building to share their stories of detention and deportation under Obama. #DignityNotDeportation pic.twitter.com/CqkITsh8rO

In response to Movimiento Cosecha’s demands for an apology, the Biden campaign said it doesn’t have a statement at this time:

Police say they will receive a citation. The activists hands are tied or handcuffed (not sure) in the back of a police van. pic.twitter.com/NfUuorxYYb

Movimiento Cosecha was also behind a protest at Center City’s Comcast building last July, when eight protesters were arrested during a national day of protests against U.S. Immigration and Customs Enforcement.