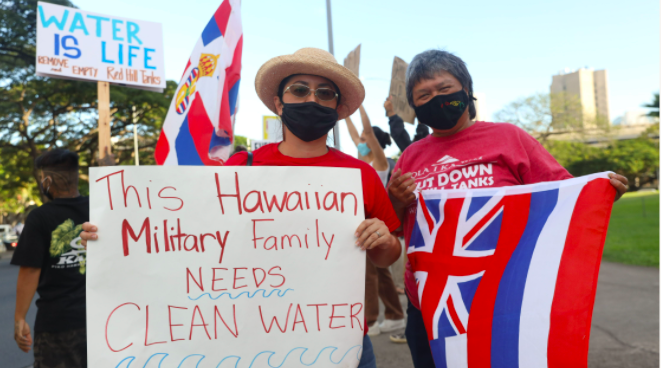 In a strongly worded proposed decision and order, on December 27, 2021, David Day, the Hawai’i State Department of Health Red Hill case Hearing Officer and Deputy Attorney General announced in a 33-page proposed decision and order that the “imminent peril” caused to the drinking water by the U.S. Navy’s leaking jet fuel tanks in the island of O’ahu outweighs the military’s claims that the tanks are key to “national security.”

On November 28, approximately 19,000 gallons of jet fuel and water leaked from the massive 20 underground fuel storage tanks at Red Hill and contaminated two wells providing  drinking water for over 93,000 persons on the U.S. Navy’s water system. Each of the fuel tanks holds 12.5 million gallons of jet fuel and the tank complex sits only 100 feet above Honolulu’s main aquifer.

Many persons, both military and civilian, on the Navy’s water system went to emergency rooms with rashes, vomiting and diarrhea.  Pets that drank the contaminated water were also sick.  The military eventually provided temporary housing in Waikiki hotels for over 4000 military families.  Other military families and all the civilian families stayed in their homes, or rented temporary housing at their own expense, used bottled drinking water and showered at nearby gyms and workout facilities.

One week later, on December 6, as the scope of the water contamination became vividly apparent, the Hawai’i Department of Health (DOH) issued an Emergency Order to the Navy. The Emergency Order, signed by the Governor of the State of Hawai’i, required the Navy to “immediately suspend operations including, but not limited to, fuel transfers at the Bulk Fuel Storage Tanks at the Facility, to defuel the fuel tanks and to take immediate steps to install a drinking water treatment system or systems at Red Hill 18 Shaft to ensure distribution of drinking water conforms to the standards prescribed by the Safe Drinking Water Act and applicable regulations and minimize movement of the contaminant plume(s).”

The emergency order also required the Navy to submit within 30 days a work plan and implementation schedule, prepared by a qualified independent third party approved by the Department, to assess the Facility operations and system integrity to safely defuel the Bulk Fuel Storage Tank.

One day later on December 7, 2021, the Navy informed the DOH of its intent to contest the Emergency Order.

The Hearings Officer set a deadline of Wednesday, December 29, 2021,  for any party adversely affected by the Hearings Officer’s Proposed Decision and Order, Findings of Fact, and Conclusions of Law, filed on December 27, 2021, to file and serve specific exceptions to the Proposal, designations of parts of the record to consider, and a request for argument before the final decision-maker, Deputy Director of Health Marian Tsuji.

The Navy is expected to file exceptions to the proposed decision and order and request opportunity for argument before the Deputy Director of Health of the State of Hawai’i who will make a final decision within 30 days, around the end of January 2022.

Following the Hearing Officers report, Rear Admiral Charlie Brown, U.S. Navy Chief of Information, said only: “We are aware of the proposed decision and have no further statement at this time.”

The Red Hill Facility is a metaphorical ticking timebomb located 100 feet above the most important aquifer on Hawaii’s most populous island.

The Hearing Officer continued that “The State of Hawai‘i, Department of Health, Board of Water Supply and the public at large all have a strong interest in ensuring that the threats posed by the Red Hill Facility do not come to pass. They have a strong interest in being protected in accordance with the directives of the DOH in the Emergency Order, which were legally authorized and appropriate. That the Red Hill Facility, as currently constituted, poses an imminent peril to human health and safety or the environment is a fact established by a preponderance of the evidence.”

Under emergency situations, the policy decision to protect human lives and the environment out- weighs the Navy’s fuel storage need

In a blow to the Navy’s national security argument, Hearing Officer Day wrote that the functional utility of the Red Hill facility to the Navy is unimportant for purposes of this proceeding  and that the importance of the Red Hill Facility as fuel storage for the U.S. military has been considered, but it carries no substantial weight in this proceeding. “In other words, when there is an emergency situation, the Legislature under HRS 342L-9 has made the policy decision to protect human lives and the environment over any functional utility of Underground Storage Tanks (USTs).

In his extensive report Day emphasized that “Everything about this evidence spoke three words: disaster, crisis, emergency.”

The report revealed that evidence, in conjunction with the other record evidence, established that the water contamination was widespread and not unique to any one person and the water coming from their taps into their homes was not just mildly contaminated but poisoned with fuel.

The report identified that the Navy did not provide sufficient warning and that people discovered for themselves that the water was poisoned based upon strong odors of fuel emanating from the water, or when they or their pets got sick. The interior of peoples’ homes smelled like “gas stations.”

Hearing Officer Day wrote that the November 2021 jet fuel release affected many thousands of Oʻahu residents. People have suffered and continue to suffer mental and emotional distress and anguish as the lack of potable drinking water impacted and continues to have impact upon virtually every important aspect of their lives which have been totally upended.

The Navy does not know precisely what happened.

The Navy does not know why or how the November 2021 Release happened at this time.

The Navy does not know exactly how the environment has been damaged or the full extent of the damage.

The Navy does not know the exact long-term consequences of the November 2021 release to humans or the environment.

The Navy still does not know what it intends to do to address any root causes of the November 2021 Release.

The report stated that diesel fuel levels in samples from the Navy’s water distribution system at its ‘Aiea Hālawa Shaft were more than double the state-approved levels for drinking water indicating that the environmental damage extends beyond the Red Hill Shaft.

Additionally, the level of jet fuel contamination was significantly higher than Hawai’i state action level. The amount of diesel (total petroleum hydrocarbons, or TPH-d) present in samples taken by Department of Health on December 5, 2021 from the Navy’s Red Hill Shaft drinking water well indicates that the Navy’s drinking water supply was contaminated with TPH-d levels as high as 140,000 µg/L, significantly higher than DOH environmental action level (“EAL”). TPH-g levels (regarding other fuel) were as high as 20,000 µg/L. The TPH-d level is 350 times the DOH’s EAL for drinking water toxicity, which is 400 µg/L. The DOH’s EAL for drinking water toxicity is 300 µg/L for TPH-g.

Navy has NO Water Treatment System

Hearing officer Day ruled that the Navy does not have a permanent water treatment system to address either recent fuel releases or future fuel releases and cited that the water is not yet clean and the environment has not yet been remediated.  Day acknowledges that the humanitarian and environmental responses are ongoing as is the Navy’s investigation.

Expert Testimony Provides Evidence That the Red Hill Facility, as Currently Configured and Operated, Poses an Imminent Threat to Human Health and Safety or the Environment

Hearing Officer Day wrote that “the continued operation of the Red Hill Facility, as it is currently configured and operated, poses an imminent threat to human health and safety or the environment.”

Day called the expert report and testimony of Dr. David M. Norfleet as the most weighty, important evidence underpinning this finding and report. Norfleet’s testimony revealed that more releases of fuel from the Red Hill facility are basically inevitable and the Red Hill underground storage tanks have a history of leaking and will continue to leak.

Norfleet’s written evidence included that the size and scope of the Red Hill underground storage tanks are unprecedented in the oil and gas industry. Additionally, the 76 reported fuel releases are more likely only a portion of the true number of releases.

The Red Hill USTs have a serious corrosion problem that the Navy will be unable to address over time with some tanks going too long without inspection. Adequate, consistent, and reliable inspections are required to prevent releases from the tanks. Difficult issues pertaining to the inspections are the combination of the manual nature of inspections, the dependence on the ability/competence of individual inspectors, the presence of an internal coating on the steel liner, the difficult working conditions, and the sheer size of the facility.

Day wrote that “The history of (fuel) releases, notwithstanding the Navy’s best efforts to prevent them, is damning. The November 2021 release is simply another datapoint along the Red Hill Facility’s track record establishing that the problems with the Red Hill Facility, as it is currently situated, are beyond the Navy’s ability to control. In just this year, there were at least two releases before the November 2021 Release.

The Navy is not reliable with respect to monitoring whether leaks are occurring, determining how much fuel is released into the environment when leaks occur, and ascertaining threats

Hearing Officer Day states: “The Navy is not reliable with respect to monitoring whether leaks are occurring, determining how much fuel is released into the environment when leaks occur, and ascertaining threats.  The Navy initially estimated the May 2021 release from the transfer of fuel between Red Hill tanks at approximately 1,000 gallons. Four months later, the Navy revised its estimate upward to 1,618 gallons and claimed that it successfully recovered all but 38 gallons of fuel. The Navy now hypothesizes—but does not know— that the May 2021 Release may be the source of the November 2021 Release of jet fuel.  The fact that the Navy theorizes that the May 2021 Release and the November 2021 Release are connected evidences a lack of understanding of, and control over, the Red Hill Facility.

Day comments that:  “The Navy obviously does not want the Red Hill Facility to release fuel, and the Navy is trying to prevent releases. But despite everything the Navy is attempting to do, it is not enough: the evidence shows that the Red Hill Facility is simply too old, too poorly designed, too difficult to maintain, too difficult to inspect, along with being too large to realistically prevent future releases. It is not just one problem but a combination of many.

As a final comment, Hearing Officer Day wrote: “In sum, the situation is beyond the Navy’s ability to adequately mitigate the threats posed by the continued operation of the Red Hill Facility, with underground storage tanks filled with fuel, at this time.”

Citizen groups on O’ahu will be pulling out the stops in their demand that Hawai’i State officials remain strong against the predictable strong Department of Defense and Department of the Navy disagreement with the emergency order.  Citizen are fed up with the military’s lack of accountability in its pollution and contamination in Hawai’i and around the world.

Ann Wright served 29 years in the US Army and Army Reserve and retired as a Colonel.  She was also a U.S. diplomat and served in US Embassies in Nicaragua, Grenada, Somalia, Uzbekistan, Kyrgyzstan, Sierra Leone, Micronesia, Afghanistan and Mongolia.  She resigned from the US government in March 2003 in opposition to the US war on Iraq. She is the co-author of “Dissent: Voices of Conscience.”