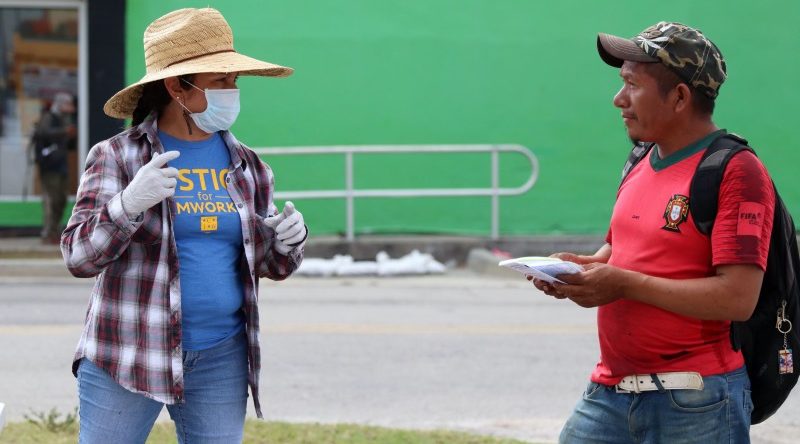 Above photo: The CIW’s Nely Rodriguez, left, distributes educational flyers and masks over the weekend in Immokalee.

Collaboration among state and county agencies, Nobel Prize-winning Doctors Without Borders, and CIW to include free testing for symptomatic and non-symptomatic alike, contact tracing, and alternative housing for those who test positive and cannot self-isolate at home;

Time remains the enemy, however, as the number of confirmed cases in Immokalee continues to grow and workers prepare to head north for the summer harvest season…

Finally, some good news about COVID-19!

In the words of local reporters with Fox 4, who shared the exciting update with Southwest Floridians late Wednesday night, “Weeks after creating an online petition, workers in Immokalee are finally getting COVID-19 testing”!  Here is the local report:

Indeed, this past week has seen more progress in the fight against the coronavirus in Immokalee – and planted the seeds for much more progress to come – than the entire month that preceded it.  Today’s post is a chance to share the very latest news from the front in the fight to protect the health of tens of thousands of Florida’s frontline essential workers; to celebrate the initial advances that have been made; and to look at what the future may hold for a community that has lived on the farthest margins of our country’s health care system for far too long.

Big news from Gov. DeSantis and the Department of Health…

Let’s start with Wednesday’s news from the state and local agencies charged with spearheading the public response to the coronavirus crisis. In addition to the announcement during Gov. DeSantis’s Wednesday press conference (embedded at the top of this post), here was the news from a local Collier County press release dated Wednesday, 4/29:

DOH-Collier and National Guard Working Together to Combat COVID-19

Naples, Fla. — The Florida National Guard, with support of The Florida Department of Health in Collier County (DOH-Collier), will provide COVID-19 testing for Immokalee residents beginning this weekend.

After a month during which fewer than 200 tests were taken in Immokalee, our call for comprehensive testing has been answered!  And most importantly, the approach to testing has changed.  In an article in the Ft. Myers News Press from April 16th titled “Florida lags behind 20 other states in coronavirus testing. Experts say more tests can slow spread,” experts discussed their concerns with the approach taken to date, an approach that requires that people requesting a test meet a series of strict criteria – symptoms and/or a history of exposure – set by the CDC:

… Experts worry that the testing protocols are not broad enough to contain the spread of COVID-19. Testing only people with symptoms excludes those who might be spreading the virus even though they don’t appear sick, they say.

“Florida should be changing its testing strategy,” said Dr. Camara Jones, a fellow at the Radcliffe Institute for Advanced Study at Harvard University and past president of the American Public Health Association. “You shouldn’t wait for people to be symptomatic. You have to sample those people who are not symptomatic.”

Jones said that by testing only sick people, “we are documenting the course but not changing it.”

That change in course would have resulted in fewer deaths had it been implemented from the start, she said.

“The people leading this are not public health people,” Jones said. Instead, the fight against the pandemic is being led by “clinical medicine,” which she said has a “narrow view of how to use a test.”

During the past month, the strict criteria in place effectively limited the tests to those with severe symptoms, giving public health officials a very limited view into the path of the virus.  Starting Sunday, as stated in the Department of Health’s press release, no referral will be needed for testing, opening testing to symptomatic and non-symptomatic people alike. This means that the number of people tested should increase significantly, and the ability of public health officials to track, understand, and predict the virus’s path should expand along with it.  The new testing protocols should provide state and county officials with the data necessary to steer a more aggressive course toward addressing the virus in the farmworker community in the weeks ahead.

That is excellent news in a community like Immokalee, where, according to the Immokalee Division Director of Collier County Department of Health Mark Lemke, the “positivity rate [is] about 17.65 percent, compared to Collier County being at 10.8 percent.”  Given the extreme poverty and cramped living conditions in Immokalee that render the community a superconductor for the spread of the coronavirus, a rate of positive tests nearly twice that of the county as a whole, and the alarmingly low number of tests taken to date, Wednesday’s news is very good news indeed.

And it was your persistence, your refusal to take “no” for an answer when it comes to protecting the health of tens of thousands of Florida’s essential farmworkers, that made it happen.  With 37,000 signatures – and counting! – on the petition to Governor DeSantis, and hundreds of calls to the governor’s office, your voices were heard in Tallahassee.  But the road ahead is long, and it will be critical to remain vigilant in the weeks to come, as the data generated by the upcoming round of testing is processed and converted into action.  Stay tuned!

Doctors Without Borders lands in Immokalee…

At the same time that the county was taking a more aggressive posture on testing, the Nobel Prize-winning humanitarian health care organization Doctors Without Borders was making its way to Immokalee to assess the situation in the farmworker community as part of their global response to COVID-19 for vulnerable populations.

Most of you will have heard about Doctors Without Borders – or as it is known more widely around the world,  Médecins Sans Frontières (MSF) – but for those of you who haven’t, here is an excerpt in their own words, from their website:

It’s easy to write inspiring words that define an organization’s mission. It’s much harder to put those principles into practice. Since its founding in 1971, Doctors Without Borders/Médecins Sans Frontières (MSF) has operated with a fierce—and challenging—commitment to independence, impartiality, and neutrality.

These principles are what make it possible for us to respond rapidly to emergencies and provide lifesaving medical care in situations where many other organizations can’t or won’t. This commitment ensures that we can help people most in need, rather than following other priorities—whether they be those of politicians, funders, or the media.

The impact and efficacy of our ability to put these principles into practice was recognized in 1999 when MSF was awarded the Nobel Peace Prize.

MSF operates in over 65 countries around the world. As medical first responders, our teams of over 42,000 doctors, nurses, and logisticians are often the first on the scene—sometimes arriving in a matter of minutes to respond to the needs of people whose lives have been upended by emergency and crisis.

The decision to offer assistance in any country or crisis is based solely on our independent assessment of people’s needs. We work to ensure that we have the power to freely evaluate medical needs, to access populations without restriction, and to directly control the aid we provide… (read more)

It was for just such an independent assessment of the medical needs in Immokalee that a team from MSF arrived last week, after several weeks of dialogue with the CIW during which they were part of an informal, ever-growing group of advisors helping the CIW shape its response to the growing crisis here.

The story of Doctors Without Borders in Immokalee has only just begun, with plans for their work here still in their infancy.  But this we can report today: they have established a team in town that will work closely with CIW, the Department of Health, the Healthcare Network of SW Florida (HCN SW), the Braden Clinic and other local organizations on the development and implementation of a multi-faceted COVID-19 response plan.

Together, these organizations plan to implement a public health education/promotion campaign. Through CIW’s advocacy, the Florida National Guard will conduct three days of testing.  HCN SW and the DOH are providing further testing, which Doctors Without Borders will expand with HCN SW’s and DOH’s assistance.  Doctors Without Borders will also target these vulnerable populations through a pilot telemedicine service with support from these organizations.  Longer-term plans include: contact tracing to further inhibit the spread of the virus, which will follow exposure to a person who tests positive for COVID-19; and alternative housing support for people who test positive and cannot self-isolate at home, all in conjunction with state and local agencies and the CIW.

This is a developing story, and we will update you in the weeks and months ahead as plans develop and the work is implemented.  But suffice it to say that having one of the world’s leading humanitarian health care organizations not only hear our call for urgent assistance in the face of this pandemic, but answer that call with decisive action, surpasses even our own often lofty expectations.  We look forward to working alongside Doctors Without Borders to blunt the impact of this deadly virus as today’s plans become tomorrow’s reality.