Impact Of COVID-19 On Prisons

Prisons and jails are amplifiers of infectious diseases such as COVID-19, because the conditions that can keep diseases from spreading – such as social distancing – are nearly impossible to achieve in correctional facilities. So what should criminal justice agencies be doing to protect public health?

On this page, we’re tracking examples of state and local agencies taking meaningful steps to slow the spread of COVID-19. (So far, however, no state or municipality has implemented all of our five key policy ideas, nor met the demands issued by various organizations nationwide.)

Can’t find what you’re looking for here? See our list of other webpages aggregating information about the criminal justice system and COVID-19.

Releasing people from jails and prisons

We already know that jails and prisons house large numbers of people with chronic diseases and complex medical needs who are more vulnerable to COVID-19, and one of the best ways to protect these people is to reduce overcrowding in correctional facilities. Some jails are already making these changes:

Prisons have not been as quick to change policies and arrange for releases. But state prisons are filled with people with preexisting medical conditions that put them a heightened risk for complications from this virus. So far, we are aware of only a handful of state corrections departments taking steps to reduce the prison population in the face of the pandemic:

Lowering jail admissions reduces “jail churn” — the rapid movement of people in and out of jails — and will allow the facility’s total population to drop very quickly.

Limiting unnecessary check-ins and visits to offices for people on parole, probation, or on registries will reduce the risk of viral transmission. We don’t (yet) know of many recent reforms in this area, but there is an important letter from current and former probation and parole executives saying what must be done to promote social distancing and continuing to support people under supervision.

In most states, incarcerated people are expected to pay $2-$5 co-pays for physician visits, medications, and testing. Because incarcerated people typically earn 14 to 63 cents per hour, these charges are the equivalent of charging a free-world worker $200 or $500 for a medical visit. The result is to discourage medical treatment and to put public health at risk. In 2019, some states recognized the harm and eliminated these co-pays. We’re tracking how states are responding to the COVID-19 pandemic: 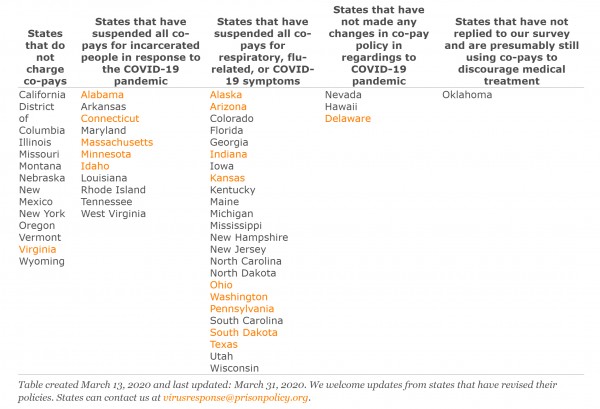 Reducing the cost of phone and video calls

Most federal prisons, state prisons and many local jails have decided to drastically reduce or completely eliminate friends and family visitation so as to reduce the risk of COVID-19 exposure in facilities. In normal times, we would point to the significant evidence that sustained meaningful contact with family and friends benefits incarcerated people in the long run, including reducing recidivism. But it is even more important, in this time of crisis, for incarcerated people to know that their loved ones are safe and vice versa. While many facilities have suspended in-person visitation, only a few have made an effort to supplement this loss by waiving fees for phone calls and video communication. Here is one notable example:

Other jurisdictions have implemented cost reductions that – while better than nothing – still severely restrict contact between incarcerated people and their loved ones:

With thousands of jurisdictions making ongoing policy changes, and local advocacy groups across the country issuing new demands, it’s impossible to track all ongoing developments in one place. If you didn’t find what you were looking for here, try these other pages:

Help us update this page

If you know of notable reforms that should be listed here, please let us know at virusresponse@prisonpolicy.org.