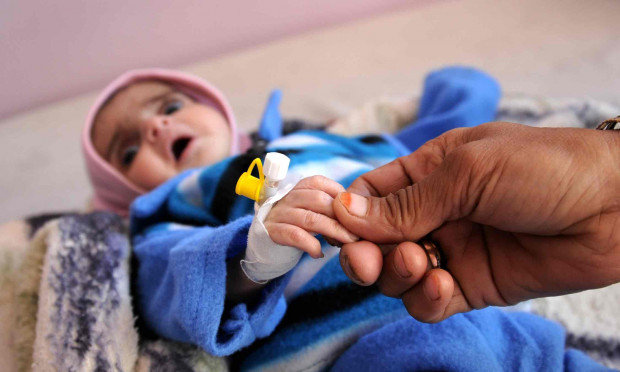 Impact Of US-Saudi War On Yemen: 7 Million Close To Famine

Above Photo: A malnourished baby receives treatment at al-Sabaeen hospital in Sana’a. A total of 6.8 million people are in a state of emergency in Yemen, where a food crisis is causing widespread malnutrition. Photograph: Mohammed Hamoud/Getty Images

Governments warned they face enduring shame should famine take hold in Yemen, where two-thirds of the population face severe food shortages, nation is near ‘point of no return’

Aid agencies have warned that Yemen is “at the point of no return” after new figures released by the UN indicated 17 million people are facing severe food insecurity and will fall prey to famine without urgent humanitarian assistance.

A total of 6.8 million people are deemed to be in a state of emergency – one step from famine on the five-point integrated food security phase classification (IPC), the standard international measure – with a further 10.2 million in crisis. The numbers reflect a 21% increase in hunger levels in the Arab world’s poorest state since June 2016.

Taiz and Hodeidah governorates, home to almost 25% of Yemen’s 28 million-strong population and the scene of intense conflict since the outbreak of civil war in 2015, are at particularly heightened risk of famine.

“We keep on talking about a country that’s on the brink of famine, but for me these numbers highlight that we’re at the point of no return. If things are not done now we are going to be looking back on this and millions of children will have starved to death, and we’ll all have been aware of this for some time. That will shame us as an international community for years to come.

“The problem is that you see the numbers but you don’t see the people behind it,” he said. “I’m always concerned when we’re waiting for a tick-box to happen before we say, ‘This is famine.’

Emphasising the role of conflict in the escalation of the crisis, Kaye said funding for Yemen – subject of a Disasters Emergency Committee appeal that has raised more than £20m as well as a call for $2.1bn (£1.6bn) by the UN – was only part of the solution.

“This crisis is happening because food and supplies can’t get into the country. Yemen was completely dependent on imports of food, medicine and fuel prior to this crisis. You have one party delaying and significantly preventing food from getting into the country, and another on the ground who are detaining aid workers or preventing aid and food from getting to areas they don’t want it to go to.

“As much as funding – and obviously we do need money to do all the work that needs to be done in Yemen – the political track is the one that really needs working on. There needs to be a significant game change from the UK government, the US government, who have influence over the Saudi-led coalition and can say, ‘You need to open up the ports, you need to ensure that enough food and aid is getting in.’

“Also, those on the ground – the Houthis, for example – need to ensure that aid can get to hard-to-reach areas, because you can throw money at this all day but ultimately it’s about people being able to access what we are trying to provide.”

Saudi sources said Houthi rebel fighters were using the Yemeni port of Hodeidah to import munitions and other goods for its war effort, and for raising cash through extortion from traders. They also claimed Houthis have destroyed key infrastructure at the port, worsening the food shortages. 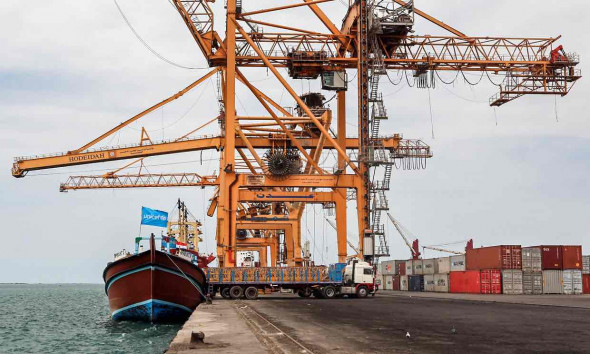 A boat adorned with a Unicef flag is unloaded at the Red Sea port of Hodeidah. Photograph: AFP/Getty Images
“They are using the port as a military base to import guns, and rockets,” one Saudi source said.

Aid groups and senior UN figures have repeatedly urged the Gulf States to acknowledge that any attack on the port would have devastating consequences for Yemen’s food crisis. Before the conflict began, 80% of imports to Yemen came through the port, and 90% of food was imported.

Saudis said the UN should visit the port to inspect how Houthis in breach of UN resolutions are using it not only to allow the import of food, but also to strengthen their war effort.

The Saudis also claimed many NGOs and UN agencies critical of the campaign waged by the Gulf States are over-reliant on Houthi sources for their information about the nature of Saudi air attacks.

Awad Ahamed Qasem al-Wesabi, a 26-year-old motorbike driver from Taiz, appreciates the impact of the conflict between Houthi rebels and forces loyal to Ali Abdullah Saleh, the ousted president, as well as anyone.

After the outbreak of war, Al-Wesabi fled street fighting in Taiz with his wife and four-year-old son, Jamal, relocating to Ibb, a city 30 miles to the north.

“We ran from our home in Taiz’s al-Wazi’iyah district because of the conflict and because my motorbike had been bombed,” he said outside his tent in Ibb’s al-Qafr district.

Yet food proved hard to come by in Ibb, where makeshift tents house thousands of people displaced from elsewhere in Yemen.

Al-Wesabi lost his wife to the cold weather and is struggling to feed Jamal.

“We ran from the war to be in another city but yet my son and I suffer from malnutrition here on a daily basis.

“Our survival depends on what is left from other people. Sometimes we eat but other times we don’t find anything to eat, we eat only one meal a day, my son goes into the restaurant next to our tent and takes what is left from people’s food; some rice and bread.

“We eat corn with water and the water is not clean, we are suffering from water and food deprivation.”

Basmah Almolaiki, an activist who has been distributing food in Ibb for the past two years, warned that people in the city are facing starvation.

“The humanitarian situation in Ibb is very bad, 80% of people are suffering from lack of food and they are starving,” she said.

“It’s not only internally displaced people who need humanitarian aid, others who have been living in Ibb need that too. [But] 20% of people in Ibb feel shy to ask for food because they are used to not asking from others, they are dying in silence without anyone knowing. We started to know these people, we give them food at night so that no one finds that out.

“The situation is exacerbated by the increasing number of people who come here. The simplest daily life support does not exist in many houses. Humanitarian organisations left Ibb when the war began, and now only Unicef is distributing blankets, but no food.

“Please don’t forget people in Ibb city, because they are starving to death.”

Juma’n Abdullah Hasan, a 29-year-old former shoemaker, shares a tent in Ibb with his son, Ayad, who is three.

“My life was great, happy and full of peace. I used to stitch shoes and by the end of the day I earned about $10,” he recalled. “We used to eat three meals in the day and sufficiently, but these days we only eat bread.” 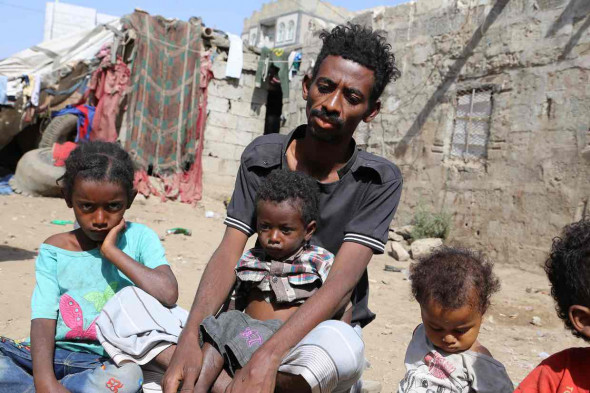 Juma’n Abdullah Hasan cradles his three-year-old son in Ibb city, Yemen. Photograph: Rakan Hasan
Hasan and Ayad’s breakfast consists of a cup of tea and a piece of bread. “Other meals come from our neighbours who live in the next tent to us,” he said. “The war affected every angle of our lives, our situation is difficult to be written in words. Death is better than this hellish life.”

Sajjad Mohammad Sajid, head of Oxfam’s Yemen programme, said: “Urgent action is needed to get food into the country and move it from port to plate, along with vital fuel and medicines. All parties to this crisis must understand that the real enemy is famine. Efforts to avert a famine need to be backed up by political action to help end the fighting.”

Saud Abdo Ali was working as a cleaner in the port city of Mokha before the war began. In Ibb, she lives in a tent alongside her daughter.

“We live under the cold and the rain. Sometimes we eat from the garbage, my little daughter cleans the home of neighbours for only $0.5 to buy us some bread to feed ourselves,” she said.

“There is no food, no pure water, no electricity, nothing. One day, a businessperson came to us and give us dishes and spoons but I told him sarcastically, ‘What should we do with these? Eat the soil?’”