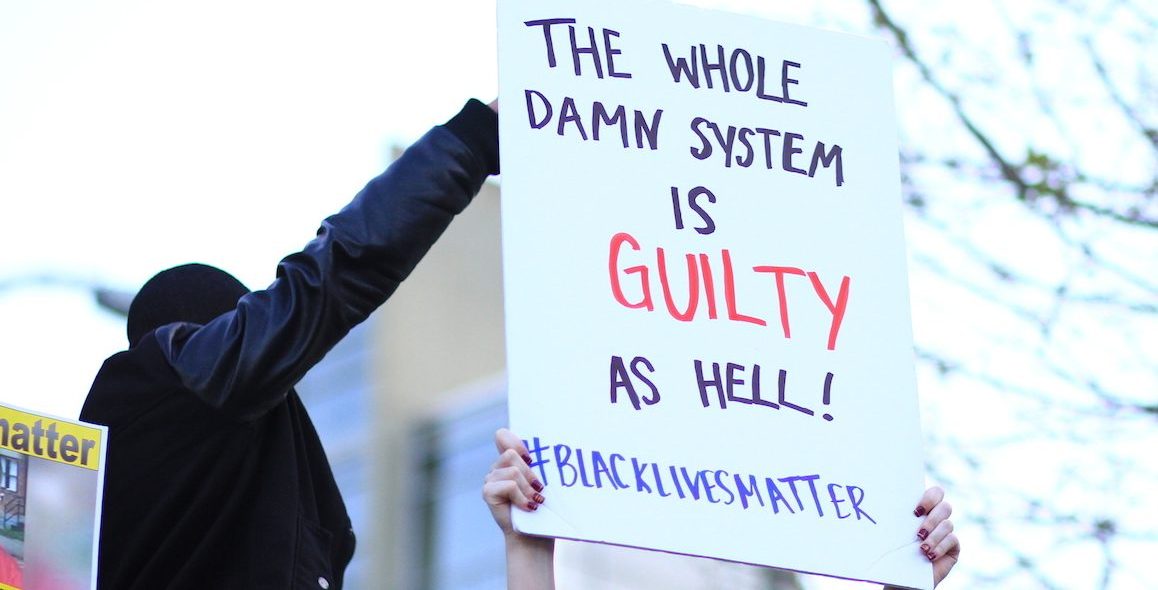 Impeachment Indicts Both Parties And Clarifies Our Tasks In 2020

If you value Popular Resistance’s news, analysis, and movement building work – all brought to you without a paywall or advertising – please make a year-end donation now. CLICK HERE TO DONATE.

The Democratic Party’s electoral strategy of impeaching Donald Trump is backfiring. Before impeachment, Trump was losing to each of the leading Democrats, but the latest USA Today/Suffolk University poll finds for the first time Trump defeating all of the leading Democratic candidates. Gallup reports that Trump’s approval has risen by six points since the launch of the impeachment inquiry. A CNN poll found that support for impeachment fell by five percent over the past month.

Rather than focus on issues that impact people’s lives — like racism and bigotry, the unfair economy that results in low wages, growing inequality, major corporations and the wealthy not paying taxes, as well as expensive and inadequate healthcare coverage — Democrats are focusing on the issue of withholding military aid to Ukraine for a proxy war against Russia when voters are tired of never-ending wars.

The Democrats, while trying to wrap themselves in the Constitution, are using impeachment as a partisan election-year tool to defeat Trump in 2020. It is failing and is confusing people on the Left. As Ajamu Baraka clarifies:

The Democrats are not focusing on what makes Trump unpopular, his open racism and sexism, his anti-environment and climate denialism policies, and his antipathy for whistleblowers and constant false statements. In fact, Representative Al Green introduced resolutions for impeachment that focused on these issues in 2017 and they were voted down by the House.

Raising Ukraine reminds people that Obama-Biden conducted an open coup there that brought more corruption to that country. Trump demanded an investigation of Joe Biden for interfering with an investigation of the appointment of his son Hunter to a well-paid board seat on Ukraine’s largest gas company — a job for which he lacked expertise. Ukraine-gate reminds people of Democratic Party corruption and their unpopular interventionist foreign policy.

Both the Democrats and Republicans have a long history of corrupt activities from the statehouses to the White House. Unfortunately, many of these activities are done with the cover of domestic law. Governments have a responsibility to ensure that basic needs are met and provide security, but in the United States, the government is a wealth-building tool for the already rich. And the security state is designed to protect the elites from the people. This is causing real hardship for most people in their everyday lives. Impeachment, as it is being conducted, will not improve things and may actually make them worse.

As Chris Hedges wrote in September, impeachment will not restore the rule of law or bring democracy but it will allow President Trump to raise the outrage of his base, which is armed, and potentially increase right-wing violence. This may already be happening in Tazewell County in Southwestern Virginia, where 82% voted for Trump in 2016. They recently deemed themselves a second amendment sanctuary county and passed a resolution asserting their right to form a militia.

“Economic, social and political stagnation, coupled with a belief that our expectations for our lives and the lives of our children have been thwarted, breeds violence. Trump, fighting for his political life, will use rhetorical gasoline to set it alight. He will demonize his opponents as the embodiment of evil. He will seek to widen the divisions and antagonisms, especially around race. He will brand his political opponents as irredeemable enemies and traitors.”

The Democrat’s election-year stunt is also sucking time and activist energy away from working for solutions to the many crises we are facing. In this way, it is fueling insecurity and anger that could erupt in dangerous ways.

Democrats Work Against The People’s Interests While Impeaching Trump

Throughout the impeachment process, Democrats lost opportunities to work for people and the planet and differentiate themselves from Trump. They demonstrated their complicity with policies that benefit the elites.

In 2016, Trump campaigned against corporate trade that sent jobs overseas and kept wages low in the US to win key Midwestern states. He railed on NAFTA, which hollowed out Rustbelt communities. During impeachment, the Democrats had the opportunity to show Trump does not represent the people but instead represents big business interests. NAFTA II, which Trump re-named the US Mexico Canada Agreement (USMCA), is a replay of NAFTA. It continues the tradition of corporate trade agreements while shuffling which industries profit from it. Instead of pointing out Trump’s failure, the Democrats signed off on his agreement after some modest amendments. This bi-partisan approval was a victory for Trump and a defeat for those who want corporate trade remade for people and the planet.

Trump also campaigned against never-ending wars and foreign interventions. While focusing on impeachment Democrats failed to point out Trump is doing the opposite of what he promised. On December 12, 188 Democrats joined him and on December 17, 37 Democrats voted for the funding in the Senate when it passed the largest military budget since World War II, $738 billion for the Pentagon. Trump signed it before flying off to his Mar-a-lago resort for the holidays. The corrupt leadership of both parties is shown in the Afghan Papers that expose the fraud of the 19-year failed trillion-dollar war for which the military had no strategy, was incompetent and knew was unwinnable.

The Democrats provided funding for a new branch of the military, the Space Force, which will lead to the greatest arms race in the history of the planet. The military budget continued the trillion-dollar upgrade of nuclear weapons begun under Obama spurring a nuclear arms race when we should be banning nuclear weapons. The Democrats could have pointed to massive spending on an arms race when the US is already spending more than the next 10 countries in the world combined — all at a time of crumbling infrastructure, the need for a rapid transition to a clean energy economy and urgent needs for housing, healthcare, and more. This followed shortly after changes in the rules on food stamps that will create food insecurity for up to 700,000 more people.

Pelosi called for impeachment at the same time as Trump’s embarrassing trip to the 70th anniversary NATO meeting. At the meeting, Trump was mocked by world leaders including French Prime Minister Macron who called NATO ‘brain dead’ because of Trump’s poor leadership. NATO should be ended as it is a force for the expansion of wars and wasteful spending on militarism but Democrats were silent on that reality.

During impeachment, regime change continued causing suffering in Latin America, the Middle East, and Asia. The economic war against Venezuela escalated with continued efforts to put in place the failing puppet Guaido. Bolivia is suffering from US-supported regime change. US-funded protests in Hong Kong and false reports on the Muslim Uyghurs are escalating conflict with China. And, the US continues its efforts to topple the Iranian government with extreme sanctions and manipulation of protests in Iran, Iraq, and Lebanon.

Finally, during impeachment, the UN climate meeting, COP 25, was held. While Trump has committed climate crimes, the Democrats are also guilty of such crimes. The United States has played a negative role throughout this history of the COP meetings. This continued at the Spain meetings where despite the US withdrawing from the Paris agreement, it continued to play a negative role.

The Popular Movement and Impeachment

There is no “progressive” side to the impeachment battle between the millionaire’s parties. On one side, Donald Trump was using his office to investigate a political opponent. On the other side, the Democrats are protecting the corruption of Joe Biden and using impeachment as an election tool. The reality is past presidents could have been impeached for numerous violations of law including serious war crimes, illegal wars, illegal unilateral coercive measures (sanctions), selling their office for donations to their billion-dollar campaigns and crimes against the environment that risk our future by not only ignoring climate change but making it worse.

Impeachment may define the 2020 election. It is a perfect distraction to keep people from fighting for what we need. In 2020 the necessities of the people and protection of the planet will be silenced. Voters will be told to make no demands because we need to remove Trump and to unite around another corporatist Democratic presidential candidate.

The Democratic leadership and the corporate media are struggling to prevent the nomination of Senators Sanders or Warren because they oppose their progressive agenda. The media is not covering Howie Hawkins, a Green candidate who has put forward the most progressive agenda built around an Ecosocialist Green New Deal and economic equality.

We need to focus on issues in 2020 and fight for a People’s Agenda. Due to the misleadership of the corporate duopoly, the nation and planet are facing multiple crisis situations. Our job in 2020 is to focus on those issues, not on a candidate or on impeachment. We need to build popular support for confronting the climate crisis and changing laws and policies to shrink inequality and end systemic racism and militarism.

To win the People’s Agenda, we need a strong and organized Left in the United States. This requires political education so people understand what is happening around them and the role of government in it. It also requires building participatory democratic structures in our communities. We spoke with Leo Panitch about this in our latest episode of Clearing the FOG: “Corbyn’s Loss: What it means for Sanders and where the Left goes from here,” which you can hear or read the transcript.

When it comes to elections, the mirage democracy of the United States has very little room for the people in manipulated elections that create an illusion of democracy. We must build electoral structures that organize the people’s movements inside the electoral system. For us, this means building an effective independent left party outside of the corporate duopoly.

Impeachment is a partisan exercise. The Democrats had their partisan vote when they impeached Trump in the House. Pelosi is now preventing the Senate from its inevitable acquittal of Trump. No matter how impeachment turns out, it will not make a difference in advancing the people’s agenda. It is our job to focus on building the movement for enacting an agenda for people and planet, something both millionaire parties will fight to stop.