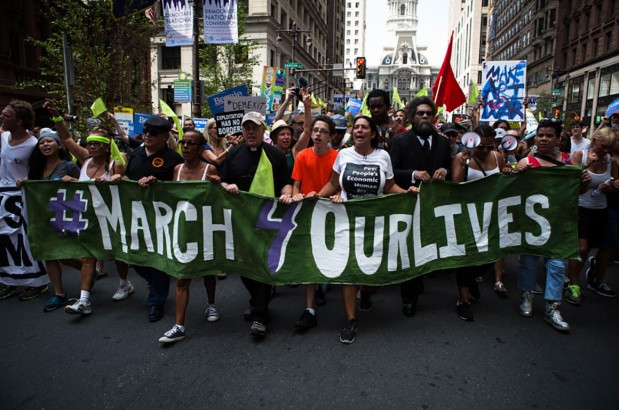 …And Race Plays A Big Factor

The U.N.’s special rapporteur  on the rights to freedom of peaceful assembly and of association completed a 17-day mission to the United States this week, and he drew some concerning conclusions about the state of those rights in this country.

Maini Kiai covered an impressive 10 cities in 17 days. He observed protests at the political conventions in Cleveland and Philadelphia and visited cities rocked by the police killings of Black men, like Baton Rouge, Baltimore, and Ferguson.

Though Kiai had much to say about the negative impact of economic and racial inequality on assembly and association, here are five important takeaways from the special rapporteur’s preliminary findings following his visit:

1. “When a right is subjected to a permit or authorization requirement, it becomes a privilege rather than a right.”

Kiai — who met with activists, advocacy groups, government officials, and law enforcement agencies — found that the U.S. permit system, which requires protesters to seek approval from courts or local authorities before demonstrating, clearly diverges from international standards on the right to peaceful assembly.

Under international law, no authorization should be required to assemble peacefully, and a system of prior notification should only be intended to allow authorities to facilitate protests and peaceful assemblies. While some cities take a lax approach to spontaneous protests, Kiai found that the permit system lends itself to “arbitrar[y] and uncertain” determinations by local authorities concerning which protests can and should be allowed to exist.

He recommended that the U.S. adopt a notification system and stop charging fees for protest permits.

2. “It is disturbing to learn that assemblies organized by African-Americans are . . . often met with disproportionate force.”

The U.N. expert expressed concern regarding the treatment of Black protesters by police because of “random arrests, flimsy charges, rough physical handling [and] verbal insults.” He specifically cited testimony from Black Lives Matter activists, like Alana Belle of Cleveland, who told him about FBI agents visiting her home days before the Republican National Convention to warn her against organizing protests.

Other BLM activists mentioned intimidation tactics, like the presence of undercover cops recording their faces as they marched during the Democratic National Convention or confiscation and destruction of videos of police taken by bystanders. Kiai rightly notes that these practices only broaden the chasm of trust between police and communities of color.

3. “The outcry for accountability for police shootings is deafening.”

Importantly, Kiai also observed a problematic breadth of discretion police officers enjoy when handling protesters. While some communities — in Jackson and New Orleans, for example — applauded police departments for facilitating some protests, Kiai noted that even these police departments often take a harsh stance against peaceful protests. These inconsistencies paint a blurred picture of police conduct in this country. Moreover, while Kiai commended the work of the Civil Rights Division at the U.S. Department of Justice, he expressed his astonishment at the lack of official data documenting police use of force.

4. The treatment of workers brought to the U.S. is not dissimilar from the “system of bonded labor practiced in a number of countries in the Gulf region.”

Kiai expressed concern over the tremendous amount of coercion by employers who threaten workers — whether documented or undocumented — with deportation for showing interest in joining a union. He learned of detention centers where migrants are subjected to “solitary conferment, physical abuse, and denial of medical attention,” and ICE’s role in the exploitation of these workers. Kiai emphasized the illegality of employer coercion and the U.S. government’s responsibility to actively enforce the labor rights of workers.

Finally, the expert mentioned counter-terrorism efforts that affect “humanitarian and peace building work abroad,” by adding pressure to foreign organizations that receive grants from the U.S. to vet their local affiliates and supporters for linkages to terrorism. Moreover, he described the impact of Counter-Violent Extremism (CVE) programs on domestic Muslim communities that are racially profiled under the guise of national security concerns. For example, “fishing expeditions” by FBI agents and Terrorist Screening Center Database, listing 1 million people suspected of terrorism – most of which are Muslim.

In sum, the special rapporteur’s preliminary findings offer an initial analysis of the U.S. government’s approach to freedom of association and assembly. A final report will be released to the Human Rights Council in June 2017. We hope the U.S. will respond to the report by engaging the state and localities that Mr. Kiai visited and providing an account for their shortcomings as well as a blueprint for change.