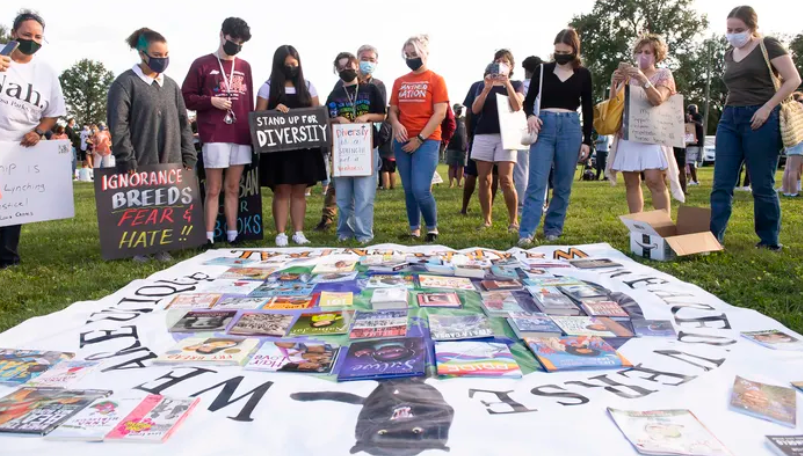 In Central York, Kids Rose Up To Save Books From Their Parents

Parents yelling about masks or demanding book bans over ‘critical race theory’ isn’t really about their kids, who have different ideas.

I’m old enough to remember when sociologists’ big worry for the American family was “helicopter parents” — moms and dads who hovered too closely over their spawn, denying them room to breathe. How quaint. The long, hot summer of 2021 has brought “the Sherman tank parent” — on a rampage, unmuzzled, rolling over school boards in a blitzkrieg aimed at keeping their kids from wearing masks in school, or reading books on racism.

It’s gotten to the point where we’re numb to headlines about Parents Gone Wild at these meetings, like the parent in Franklin, Tenn., who told public-health experts, “We know who you are … You can leave freely, but we will find you,” in the wake of a school board mask mandate, or the Wisconsin school board member who quit along with two of his colleagues because “I wasn’t ready or prepared for the vitriolic response …”

In many cases — especially in school districts where conservative parents seem riled up over anti-racist books or school lessons they’ve mistakenly branded “critical race theory” — the anger seems generated more by a segment from Fox News than what is actually happening in their child’s classroom. Yet these new “Sherman tank parents” say their rage is all about protecting their kids — promoting freedom and fighting alleged indoctrination by leftist teachers.

Does anyone ask the kids, though? On mask mandates, there’s little evidence that schoolchildren are rebelling against wearing masks to prevent the spread of COVID-19 in the way that too many of their parents are, or that there’s any substance to grown-up complaints that masking impedes learning or makes kids unhappy.

Now, in one Pennsylvania school district, the kids have actively fought back against one of the nation’s harshest crackdowns against anti-racism books in schools, which essentially banned children’s tomes that celebrate the lives of the Rev. Martin Luther King Jr. and Rosa Parks, as well as an autobiography of Nobel Peace Prize winner Malala Yousafzai, a Sesame Street town hall on racism, and a few dozen other books, many written by Black and brown authors.

The mess in the Central York School District, which includes several suburban townships just north of York, in a county where Donald Trump won 62% of the vote, started after some parents and teachers had hoped to bolster the curriculum around anti-racism in the wake of the George Floyd protest marches in spring 2020. The move backfired when some parents started complaining about the reading list proposed by a committee. “I don’t want my daughter growing up feeling guilty because she’s white,” one parent, Matt Weyant, told a recent school board meeting. Then, panicked school board members imposed “a freeze” on students using the books. To critics, it sure looked like a school book ban — with a chilling effect on teachers hoping to teach lessons against racism.

But no one was more unhappy about this book “freeze” than the kids at Central York High — the ones who some of their parents claimed they were protecting from dangerous ideas. At first, five students staged a daily protest in school, and as the new school year progressed, hundreds more joined their group which they dubbed the Panther Anti-Racist Union (”Panther” is the school mascot). The group showed up at school board meetings and grew increasingly vocal.

“Our thoughts are being invalidated,” one of the student activists, Edha Gupta, told a local TV station. “There’s only one portion of the community that this ban represents, and it’s not ours.”

The student protests not only roused the large number of Central York parents who actually want their children to learn about promoting diversity and fighting racism, but helped turn the book flap in central Pennsylvania into a national story. Brad Meltzer — the author of two of the restricted kids books, about Rosa Parks and MLK — flew up from Miami to air his complaints with the school board, while free libraries in and around York vowed to stock the books on the school’s restricted list to make them widely available.

“They are fearful for the teachers they love and wonder if by deliberately or inadvertently defying the ban those teachers are in danger of losing their jobs,” Patricia Jackson, a language arts teacher at Central York, told me. “One student pointed to a poster of Maya Angelou on my classroom wall and asked, ‘Ms. Jackson, are you allowed to have that? Aren’t you afraid you’ll get in trouble or lose your job?’”

But on Monday night, the kids won.

The Central York school board met and voted unanimously to end the book freeze, just a couple hours after about 200 pro-book parents and students had rallied outside the meeting. “It has taken far too long,” school board president Jane Johnson said in a statement — implying that the real “freeze” in Central York wasn’t on literature but among school leaders so fearful of a vocal minority.

Ben Hodge, a Central York High theater teacher who advised the student protesters, told me late Monday night that the young activists “are heroes and should be celebrated as bastions of American freedom and democracy. I want to be clear, these kids did this.”

Arguably, the high schoolers of York County have taught us a lesson, by reminding us that the vast majority of Americans — especially schoolchildren but also most parents — support both the common-sense decency of wearing masks in school while the coronavirus is still untamed, and also classrooms where anti-racism is taught as part of the American story. In fighting against a narrow-minded minority, these kids learned and then illuminated something equally important: How to beat back bullies.