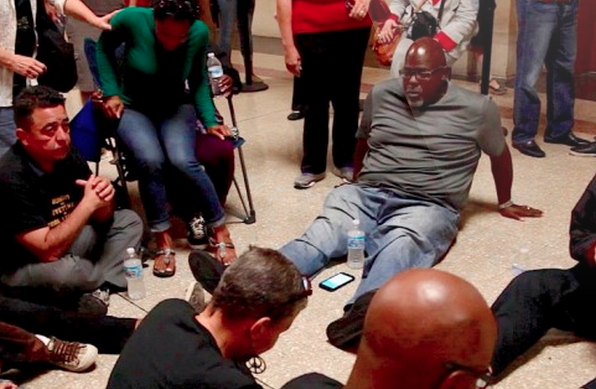 A circle of ten people sit outside Mayor Rahm Emanuel’s office demanding a meeting with the mayor. They have not taken solid food for 12 days. The Dyett hunger strikers ask that a decision be made regarding their proposal to keep the only open enrollment high school in the Bronzeville neighborhood of Chicago.

The mayor does not come out.

An aide is sent instead.

We might as well be on the opposite site of a moat of a feudal castle. The barrier between Rahm Emanuel and the members of the Bronzeville community is that wide.

Yet, as we support the Dyett hunger strikers, many of us find ourselves defending their actions.

This past week Eric Zorn, a writer for The Chicago Tribune, claimed the hunger strikers were taking the public hostage with their actions that he called a planned suicide. Then Alderman Will Burns stated that he refused to be bullied by the strikers.

Let’s be clear, a hunger strike is a fast, a withholding of solid food. It is an action which is rooted in deep moral resolve.

As Jitu Brown, hunger striker and community organizer, said, “When you haven’t eaten for a while you gain great clarity.”

Playing by the Rules

By every measure, the coalition for Dyett School has followed all the rules. They engaged with the community and education specialists. They prepared a vision for the school that meets the needs of the children. And they filed the Request for Proposal with the Chicago Public Schools within the guidelines of the request to the Chicago Public Schools. The coalition dotted their i’s and crossed their t’s.

Yet, when I field opposition questions about the strike people will often ask, “Why don’t they just play by the rules?”

A parent activist in Chicago, Karen Fraid explains, “Peaceably assembling and petitioning the government are protected rights, as is the right to make choices about what one does with one’s body. Which Constitutional Amendment covers giving charter schools and vendor contracts to your campaign contributors?”

Then this past week the mayor and the chief education officer of the Chicago Public Schools, Janice Jackson, claimed that the Bronzeville neighborhood did not need a high school because schools in the area are under-enrolled. There are high schools, this is true. But discrediting the strikers by claiming that an open enrollment high school is not needed does not make it true.

With the closing of Dyett High School one of the most historic African American neighborhoods in the country will not have a publicly run high school that admits all of its children. This is a fact.

Chicago neighborhoods have often been described as a patchwork quilt with strong divisions along racial and ethnic lines. There has always been a purposeful separation of black, brown, and white peoples in our city. When speaking about the reasons for the Dyett hunger strike, Dr. Robert Jones, one of the hunger strikers and pastor of the Mt. Carmel Baptist Church, says. “Taking everything from our piece of the quilt is evil.”

Dr. Jones continued, “Someone will always try to take something from you. You can stand up and demand it back or you can let it go and hope they will not come after you again.”

The Dyett hunger strikers demand their school back – as a community school, open to all children, accountable to the community, and sustained by the community.

And then there are those who confront the strikers and say that they cannot win. I would challenge that assertion, the Dyett hunger strikers have already won by the sheer righteousness of their cause. Those of us who have fought for the right of each child to attend a public school close to their home know all too well that this is not about one school.

“We are willing to starve ourselves to shine a light on the pervasive racism in this country,” says hunger striker Jeanette Taylor-Ramann. “I am hungry because I need to look people in the face and tell them this is wrong.”

What can I do?

Those who fully understand the impact of a neighborhood losing an open enrollment high school often ask what they can do. First of all, call Mayor Emanuel’s office (312 744-3300) in support of the Dyett coalition’s proposal for a Global Leadership and Green Technology school. Second, call the office of Alderman Will Burns (773 536-8103) and explain that even though this might seem like a local issue to him, the eyes and hearts of the nation are following this story.

If you are in Chicago, please follow the Teachers for Social Justice website(www.teachersforjustice.org) for information about the hunger strike. Come to sit with the strikers outside their circle, listen to their stories, and support them with the power of your presence.

And finally for those of you who follow a faith or spiritual tradition, Pastor Jones said to us today, “There is no such thing as praying for a person too often.”