In Court, Assange Flashes Thumbs Up, Faces Extradition To US

Above: Assange shows a victory symbol from the police van after his arrest at Ecuadorian embassy on April 11, 2019.

Note: WikiLeaks founder Julian Assange was arrested in London on computer hacking charges filed by US officials, stemming from the organizations’ release of classified government cables from former Army intelligence analyst Chelsea Manning. In an indictment unsealed just hours after Assange’s arrest in London, the US accused him of assisting Manning in “hacking a password stored on United States Department of Defense computers.” Assange’s anti-secrecy publication, Wikileaks, published the cables starting in 2010. At the hearing on April 11, the judge found Assange guilty of failing to surrender and scheduled a court appearance for May 2 on the U.S. extradition request. The judge sent Assange to the Crown Court for sentencing as the bail violation offense because he said it was so serious.

US prosecutors later unsealed their indictment against Assange, saying that he was wanted “in connection with a federal charge of conspiracy to commit computer intrusion for agreeing to break a password to a classified U.S. government computer.”

According to the Department of Justice “The indictment alleges that in March 2010, Assange engaged in a conspiracy with Chelsea Manning, a former intelligence analyst in the U.S. Army, to assist Manning in cracking a password stored on U.S. Department of Defense computers.

“During the conspiracy, Manning and Assange engaged in real-time discussions regarding Manning’s transmission of classified records to Assange. The discussions also reflect Assange actively encouraging Manning to provide more information. During an exchange, Manning told Assange that ‘after this upload, that’s all I really have got left.’ To which Assange replied, ‘curious eyes never run dry in my experience.’“

After reading the indictment, I can see why the government was trying to get Manning to testify against Assange. The indictment has serious gaps on the central issue, i.e. how Assange actually assisted Manning. Even the indictment fails to provide any information on that critical issue.  KZ

Julian Assange has appeared in the dock at Westminster Magistrates’ Court after being arrested at the Ecuadorian embassy this morning.

The WikiLeaks founder pleaded not guilty to a charge at Westminster Magistrates’ Court that he failed to surrender to custody as required for an extradition order to Sweden.

Assange will not give evidence but his lawyer Jennifer Robinson will argue he had a “reasonable excuse” for not surrendering to custody.

Assange has been further arrested over an alleged conspiracy with Chelsea Manning “to break a password to a classified US government computer”, the US Department of Justice said.

In a statement, the department said: “Julian P. Assange, 47, the founder of WikiLeaks, was arrested today in the United Kingdom pursuant to the U.S./UK Extradition Treaty, in connection with a federal charge of conspiracy to commit computer intrusion for agreeing to break a password to a classified U.S. government computer.” 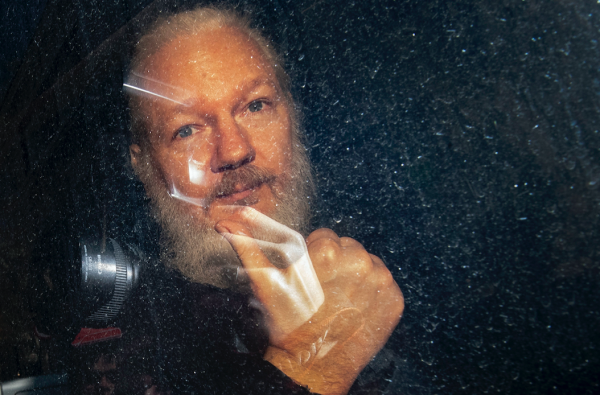 Assange gives thumbs up from police van after his arrest on April 11, 2019.

The basis of Assange’s defense of “reasonable excuse” is that he could never expect a fair trial in the UK as its purpose was to “secure his delivery” to the US.

A packed public gallery and a full press bench watched as he walked into court wearing a black suit and polo shirt.

With grey hair tied into a ponytail and long beard, Assange saluted the public gallery before giving a thumbs up.

Members of the public were warned they would be in contempt of court if they recorded proceedings. 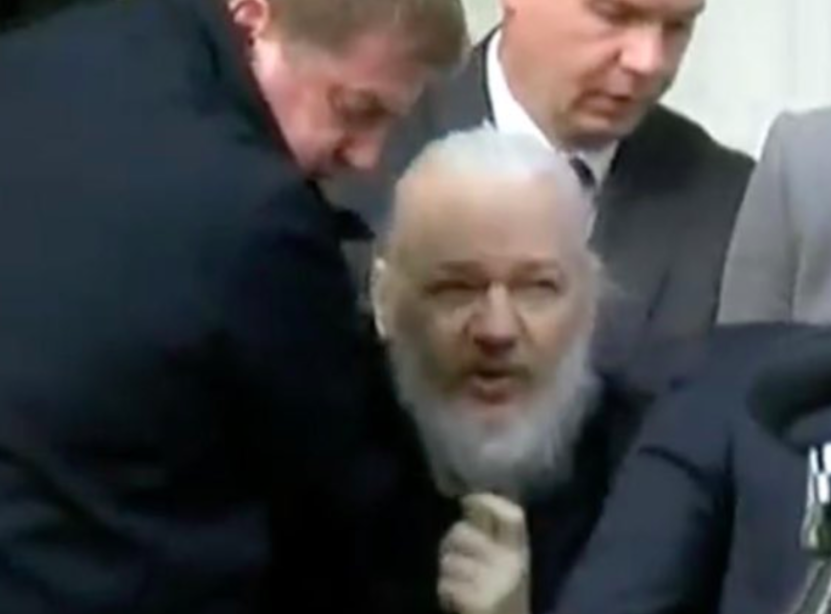 WikiLeaks founder Julian Assange being hauled out of the Ecuadorian embassy and arrested on April 11, 2019.

Officers were invited into the Ecuadorian embassy this morning where Assange has been holed up since 2012 after he failed to surrender to court.

Assange was shouting and gesticulating as he was carried out of the Ecuadorian Embassy in handcuffs by seven men and put into a waiting Met Police van, video footage showed.

A witness said: “He was screaming. He was struggling, I think he felt a bit weak. He was surrounded by police.”