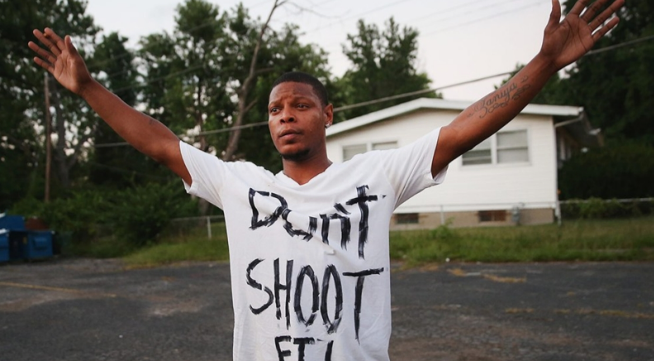 Geneva, Bid To Shame US Over Killings

As outraged residents of Ferguson, Missouri continue to protest a police shooting that left unarmed African-American teenager Michael Brown dead, Ron Davis – the father of another slain black teen in Jacksonville, Florida – is aiming to shame the United States before the United Nations for what he says are murders committed with impunity against young black men.

At the 85th meeting of the Committee on the Elimination of Racial Discrimination in Geneva, Switzerland on Wednesday and Thursday, Davis hopes to pressure Washington to bolster efforts to stop the phenomenon of what he and the United States Human Rights Network (USHRN), the NGO backing him, call “the criminalization of race” in America.

The U.S. will be forced at the meeting to answer questions from Davis and the international community in what the American Civil Liberties Union told the press Wednesday was a singular opportunity to hold Washington accountable.

Davis is angry over what he and many others say is a spate of unpunished murders of young black men across the country.

Six months after neighborhood watch coordinator George Zimmerman was acquitted in the killing of unarmed black teenager Trayvon Martin, Davis’ son Jordan was killed at a gas station after he and his friends refused to lower the music in their car. The case brought against Jordan’s killer, Michael Dunn, resulted in a mistrial.

“These things eat at you that shouldn’t have happened, and the people doing these transgressions are getting away with it,” Davis, who was joined in Geneva by Trayvon Martin’s mother, Sybrina Fulton,  told Al Jazeera.

Ron Davis hopes to direct his anger over the deaths into a solution for African-American fathers who have come to teach their children to accept police brutality as a fact of life in the United States. Davis and USHRN director Ejim Dike hope that taking U.S. race issues to the international community will create political leverage in Washington.

“Talking about any issue as a human rights violation gets the attention of the U.S. government. It’s embarrassing for the government that champions itself as a beacon of human rights in the world,” Dike added.

Language of the unheard

While Davis and Dike engage in their international political bid, the St. Louis-area black community is working to start a movement to address their human rights concerns.

In a municipality where an estimated two thirds of residents are black, only three of a police force of 53 are black, according to Ferguson committeewoman Patricia Bynes, 34.

In the municipalities in the Greater St. Louis Area, Bynes says, black people’s movement is heavily restricted by law enforcement.

“If you have to drive through these municipalities, you’ll be harassed multiple times in one night,” she said.

And there is only one black member of the local school board.

Local black community leaders say the civil rights movement has traditionally been calm in the city, and there hasn’t been a history of violent racial clashes.

“In St. Louis there is a different mentality – there isn’t really an appetite for explosive confrontation. It’s mostly been one of dialogue and negotiation. The empowerment has taken a different form than perhaps different cities,” said Rev. Douglas Parham of the Ferguson-area Community Church of God.

But Shafeah M’Balia, an organizer with North Carolina-based advocacy group Black Workers for Justice, says she believes the lack of confrontation has sinister roots, citing the infamous Counter Intelligence Programs (COINTELPRO) executed by the FBI between the 1950s through ’70s to covertly disrupt Black Power and other ethnic-based movements.

“One of the objectives was to separate out the youth from the movement so that the lessons being learned in the ’50s and passed on in the ’60s wouldn’t be passed on to the youth in ’70s.”

Regardless of why Black Power seems never to have reached Ferguson, youth from the area are taking to the streets, finding new ways to try to feel empowered, Bynes said. But not all of those actions, according to Bynes, have been productive.

Bynes heard a 19-year-old woman speak at a recent demonstration about how she participated in looting because, “That’s the only thing they will listen to — when my actions start hitting their pockets.”

“I don’t have a response for that,” said Bynes. “There is a better way.”

“A riot is the language of the unheard,” Rev. Parham said, echoing the teachings of Martin Luther King, Jr. But violence is not the answer, he added.

“We now have rights for women, women have achieved high levels in a full spectrum of professional and business ways – that is a byproduct of the civil rights movement – a nonviolent movement,” he said. “Gay rights is a byproduct of the black civil rights movement. Nonviolence has its long-term effect. Eventually nonviolence brings the oppressor to the side of the oppressed. I would not advocate violence at all. That would be a disastrous strategy for the people who engaged in it.”

“The young woman looting won’t make the economic system feel any pain. An effective boycott could bring economic stress to businesses that serve the community. The things that would be more aggressive – possibly more effective would require community organization and discipline. That is achievable but not easily achievable.”