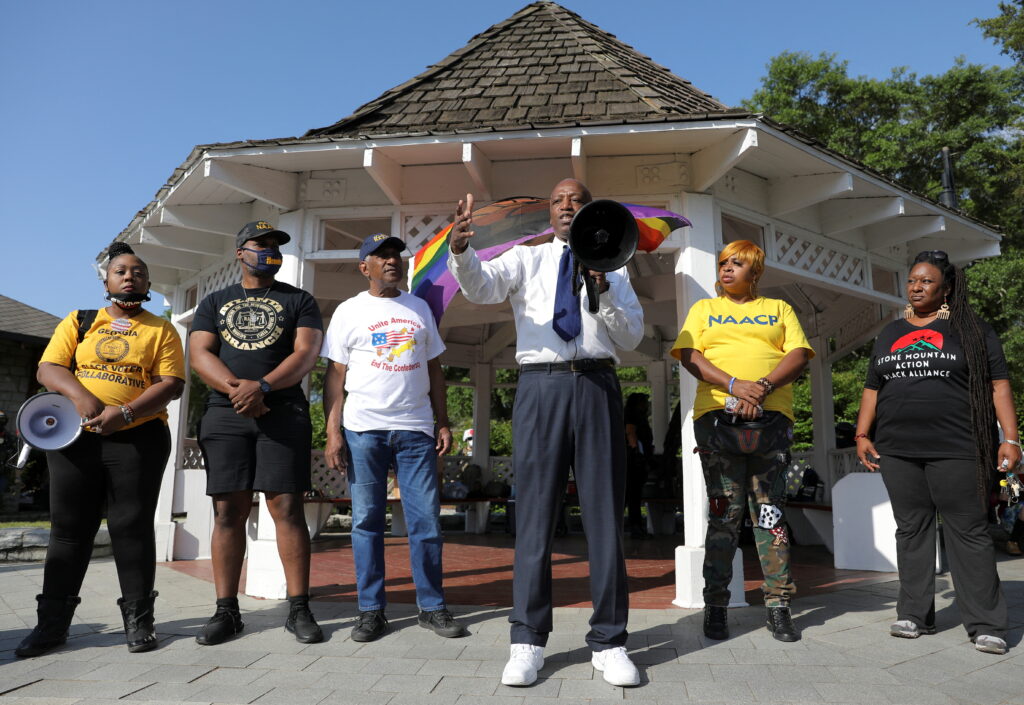 In Georgia, Protesters March At Monument To South’s Pro-Slavery Past

Atlanta, Georgia – Carrying signs decrying “racist traitors,” about a hundred civil rights activists marched and chanted at Georgia’s Stone Mountain on Saturday to protest at the return of an annual celebration of the Confederacy at the foot of a towering monument to the heroes of the South’s pro-slavery past.

As dozens of state and local police, including SWAT teams with armored trucks, looked on, the state chapter of the Sons of Confederate Veterans (SCV) with 200 supporters gathered for its celebration, which it says honors the sacrifices of their forebears.

The Atlanta NAACP and other civil rights supporters, some using megaphones to try to shout down the event, which it views as a salute to the South’s legacy of racism.

“We stand against the celebration of chattel slavery,” said Gerald Griggs, state president of the NAACP, before the march began. “We cannot celebrate the world’s largest monument to white supremacy.”

The event, which returned after a two-year hiatus, took place at the foot of a 90-foot-tall, bas-relief sculpture depicting three Confederate leaders on horseback that is notched in Stone Mountain’s granite face.

The Stone Mountain Memorial Association, which runs part of the sprawling park about 20 miles northeast of Atlanta, cancelled the gathering in 2020 and 2021 because of the COVID-19 pandemic, as well as the potential for violence at the event.

Stone Mountain has long held symbolism for white supremacists. The Ku Klux Klan, a hate group formed by Confederate Army veterans with a history of lynchings and terror against Black people, held its rebirth ceremony atop the mountain in 1915 with flaming crosses.

In recent years, tensions between the two sides “began to create a clear and present danger”, the association said in a statement. Even so, it said it would let this year’s event go ahead and welcomed peaceful gatherings “from all quarters.”

Timothy Pilgrim, the Georgia Division Director of the Sons of Confederate Veterans, spoke even as protesters shouted over him with “Boos” and obscenity laced calls to “shut up.”

“We are here about heritage and history,” Pilgrim told Reuters before the event. “This has nothing to do about race, we welcome all to our programs.”

Martin O’Toole, a SCV spokesman and keynote speaker at the event, is also a leader in the Charles Martel Society, a self-avowed white nationalist group based in Atlanta.

O’Toole said the gathering honors those who fought in the 1861-65 American Civil War on the Confederate side, which sought to secede from the Union to determine its own destiny.

“The South remembers its dead,” O’Toole said. “They were the patriots of their day.”

He said it was clear to him that the memorial service is a glorification of the pro-slavery cause.

“We have to be there and stand against this,” Rose said. “Silence gives consent and they glorify a past of chattel slavery and its horrendous violence against humanity.”