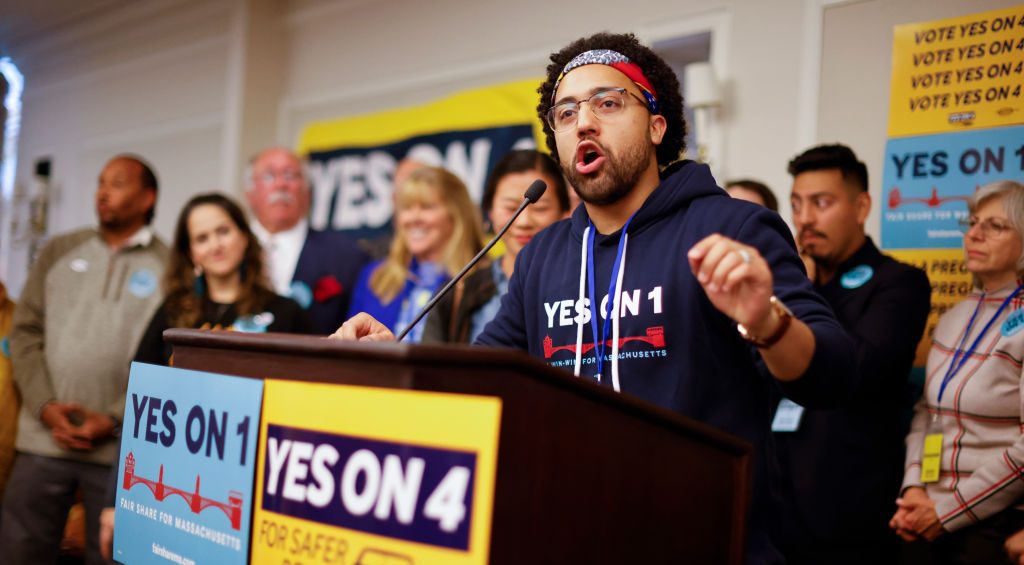 In Massachusetts, Unions Beat Billionaires To Pass A Tax On The Rich

Above Photo: Jeron Mariani, the campaign manager for Yes on 1 (the campaign for the Fair Share Amendment) speaks to attendees at the Yes on 1 and Yes on 4 event for the 2022 midterm elections in Boston, Massachusetts, November 9, 2022. Carlin Stiehl for the Boston Globe via Getty Images.

A broad coalition of labor and community groups took on billionaire money and won.

Massachusetts – While the Democrats’ worst fears of a “red wave” did not materialize, the midterms also didn’t feature many clear affirmative wins for the Left. But in Massachusetts, working people scored a major victory with a ballot measure to tax the rich and fund public investment. Supported by a broad labor-community coalition, the passage of the Fair Share Amendment can serve as a model for ballot initiative campaigns nationwide.

The Fair Share Amendment will create a 4 percent tax on annual income above $1 million. The funds raised from this measure are mandated to be spent on public education, transportation, and infrastructure repair. According to the Institute on Taxation and Economic Policy, the amendment will generate over $2 billion every year for the state. The opposition campaign, funded by billionaires including New Balance’s Jim Davis and Patriots owner Robert Kraft, was aggressive, and the contest was close: 52 percent of Massachusetts voters ratified the amendment.

Raise Up Massachusetts had already almost scored a victory on the Fair Share Amendment back in 2015, when the group collected 150,000 signatures and passed it at two state constitutional conventions. But corporate interests responded by mounting a lawsuit that successfully removed the amendment from the ballot based on a procedural technicality.

The message sailed past billionaire money to victory because it was clear, compelling, and broad-based: make the rich pay so we have more revenue to improve the lives of working people. The priority issues of public education, public transit, and infrastructure both appealed to ordinary people and garnered support from critical coalitional partners.

A notable feature of this Fair Share Amendment is the high level of support it had from the building trades. As in most of the country, infrastructure issues have been getting more dire in Massachusetts. The Massachusetts Department of Transportation has listed 641 bridges in the state as structurally deficient. In order to bring the state’s transit infrastructure into a state of good repair in the next decade, the state is looking at a transportation funding gap of $8 billion. Building trades unions rallied behind the vision of addressing these infrastructural problems by creating good union jobs.

Labor unions also put their money where their mouth is as the main source of funding for the campaign. Given the Fair Share Amendment’s focus on public education funding, it’s not surprising that teachers’ unions gave most enthusiastically. The Massachusetts Teachers Association alone donated $4 million to the effort.

Fair Share Amendment campaigners faced a well-funded opposition that spent millions on misleading television ads. Corporate entities like CrossHarbor Capital Partners, a Boston investment firm that spent $500,000 trying to defeat the amendment, mobilized to prevent the door from opening to further taxation of the rich in the future. Prominent members of the pro-corporate Massachusetts Competitive Partnership, like Ron O’Hanley and Jeffrey Leiden, donated large sums against the effort as well.

The corporate-funded opposition played on anti-government sentiment to craft arguments against taxing the rich. Even though the amendment constitutionally requires that the funds raised through the income tax be spent on education and infrastructure, opponents claimed that the state legislature couldn’t be trusted with the public’s money.

They also exaggerated fears of the wealthy fleeing the state because of the tax. In other scenarios, the data shows that these fears are rarely justified. California, for example, has since 2011 had the lowest average annual out-migration rate of people earning more than $200,000, despite having the highest top income tax rate in the country.

When these arguments didn’t work, the opposition coalition turned to classic homeowner populism and claimed that the amendment would double the income tax for people who sell their homes. However, Fair Share Amendment activists were easily able to show that very few homeowners would actually be affected by this. Last year, only eight hundred out of one hundred thousand houses that were sold would’ve received an additional tax under the amendment.

While the opposition almost exclusively articulated their arguments through advertisements, supporters had an army of door knockers who made the case face-to-face with working people. Organizers used relational organizing apps that were a feature of the electoral campaigns of Bernie Sanders and Alexandria Ocasio-Cortez.

Canvassers found it easy to make the case that the vast majority of people in the state would not see any tax increase — only improvements in their daily lives. Speaking about her experience on Class Matters Podcast, University of Massachusetts Amherst professor and campaign supporter Eve Weinbaum recounted that it was some of the easiest canvassing she’s ever done. The amendment gathered support across the state, not just in the more progressive Boston metro area. In Western Massachusetts, vote shares ran as high as 75 percent in Williamstown and 76 percent in Great Barrington.

Supporters see the victory as a watershed moment. The Massachusetts Teachers Association said in a statement, “Following years of austerity budgeting for education and a gubernatorial administration with a diminished vision for what our public schools and colleges can be, the passage of Question 1 [the Fair Share Amendment] provides us with reason for profound hope.”

Ballot measures offer the Left an important opportunity to cut through culture war distractions and petty partisan divides. They provide the occasion to develop productive working relationships with important allies like labor unions, and to talk directly to working people about our common enemy and the need for public investment. Voters in Massachusetts have shown us that with clear, broadly appealing messaging and strong labor union support, it’s possible to take on the rich and win billions for the public services we rely on.