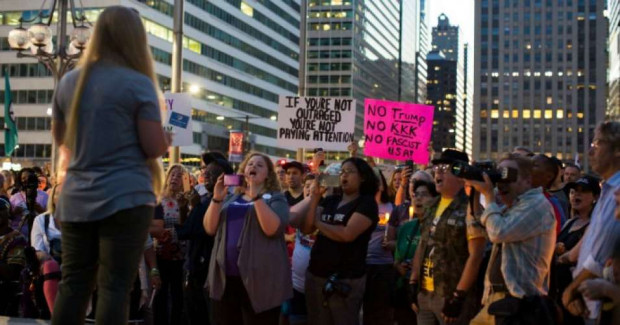 In Massive ‘Outpouring Of Solidarity,’ Thousands Rally For Charlottesville

Above Photo: A vigil is held in downtown Philadelphia on August 13, 2017 in support of the victims of violence at the ‘Unite the Right’ rally in Charlottesville, Virginia this weekend. (Photo: Jessica Kourkounis/Getty Images)

“Tonight, we mourn. Tomorrow, we continue to fight, harder than ever.”

Thousands of Americans in cities across the country rallied Sunday night to denounce the racism displayed at the so-called “Unite the Right” rally that took place in Charlottesville, Virginia, and to mourn the death of Heather Heyer, an activist who was killed Saturday during an anti-racist demonstration.

James Alex Fields Jr.—who was charged with second-degree murder after he plowed his car into a crowd of demonstrators, killing Heyer and injuring around two dozen others—has been characterized by one of his former teachers as a Nazi sympathizer.

Following the deadly attack, activist groups mobilized rapidly, planning vigils and “Solidarity with Charlottesville” events throughout the nation. According to a map Indivisible shared with Vox, nearly 700 events were scheduled in a matter of hours.

“This is a moment when we need to demonstrate that we as a nation have the capacity to stand together in the face of hate,” Ben Wikler, Washington director of MoveOn.org, told Vox‘s Jeff Stein.

“Just as Trump’s election led to the women’s march, this white supremacist terror is sparking a nationwide outpouring based on the idea that we can build a democracy of shared religions and shared races,” Wikler added. “This attack is a reminder of the nation’s darkest heritage; the outpouring of solidarity following is a reminder of its best.”

Demonstrations are set to continue on Monday, with events planned at the Capitol and outside Trump Tower in New York City.

Here is a glimpse at some of the events that took place on Sunday.

Full house at Paine Plaza. Lean in and push against racism in Philadelphia #vigil4cville #StopWhiteTerrorism pic.twitter.com/uJwLqDYbgH

March heading past Bryant Park. They keep taking detours to get around police barricades pic.twitter.com/S0WmXV3ZMB

Tonight, we mourn. Tomorrow, we continue to fight, harder than ever. pic.twitter.com/LxsQY8MzsJ

Among chants for democracy, these three link arms and sing of love in unison as Tucson marches. #Charlottesville #ThisIsUs @IndivisibleTeam pic.twitter.com/f7TV4ogv9G

Hundreds already turned out for the Ann Arbor rally in solidarity with those standing against hate in #Charolettesville. pic.twitter.com/znWofULe4G