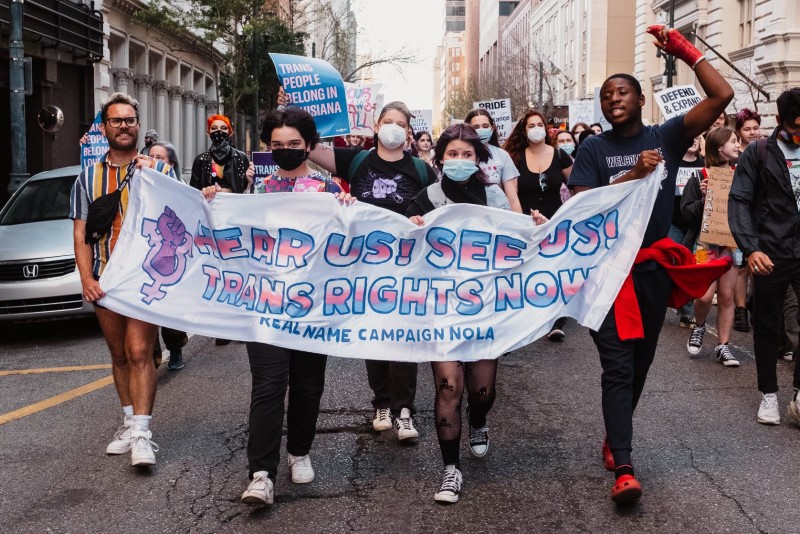 New Orleans, LA – Around 250 community members gathered at New Orleans City Hall, March 25, to forcefully voice their opposition to a string of legislation introduced by Louisiana Republicans in recent weeks. This includes bills that would restrict trans minors’ access to healthcare, their ability to participate in school sports, and could criminalize LGBTQ+ students and educators for being “out” in Louisiana schools.

The demonstration was attended mostly by students from three New Orleans high schools who have taken the initiative in organizing bold actions both on and off their campuses. Earlier in the day students at Benjamin Franklin High School held a walkout where hundreds of their classmates marched to the front of the school chanting “We say gay!”

Other students came to the event after another rally organized at a nearby high school. Christie Holliday from Queer Students and Allies of Louisiana said, “We will travel to Baton Rouge to confront the old white men who want to control our lives. We will fight back against our oppressors.”

Community members of all ages and from all walks of life proudly stood alongside the students. They acknowledged that the right-wing push to repress LGBTQ+ youth opens the door to other reactionary attacks like erasing reproductive rights.

Speakers from two immigrant rights organizations emphasized their solidarity with LGBTQ+ people. Mohamed of New Orleans Immigrants’ Rights Action said, “If anyone knows what it’s like to face a nationally coordinated Republican attack, it’s immigrants. So we will fight alongside you until all of us are free.”

Across the South, educators are pointing out that so-called “Don’t say gay” bills will have a terrible impact on students and teachers alike. Lauren Jewett spoke at the rally for United Teachers of New Orleans. She stated LGBTQ+ students could face further social alienation and repression from school administration and parents, and LGBTQ+ teachers could face reprisals for even mentioning their spouses or partners.

These bills could exacerbate the nationwide plague of teen suicides in the LGBTQ+ population, which is already four times more likely to attempt suicide than its peers. Additionally, all students would suffer from an already gutted sex education curriculum becoming even more narrow and anti-science.

After the energetic rally, the protesters carried their outrage to the streets. Under clear skies, they marched through busy downtown rush-hour traffic to show their collective strength. Serena Sojic-Borne of the Real Name Campaign said, “We won’t hesitate to disrupt business-as-usual to defend trans youth from these attacks. If shutting down rush-hour traffic seems like an inconvenience, imagine the inconvenience we face when our democratic rights are used as a punching bag by politicians who don’t care about our lives.”

The Real Name Campaign announced a call to action at the end of the march. They encouraged the demonstrators to flood the phone lines of Democrat Governor John Bel Edwards, to demand he promise that he will veto any bigoted legislation that ends up on his desk. Organizers emphasized that this is only the beginning of their struggle and that everyone must stay involved to ensure all three bills are defeated.