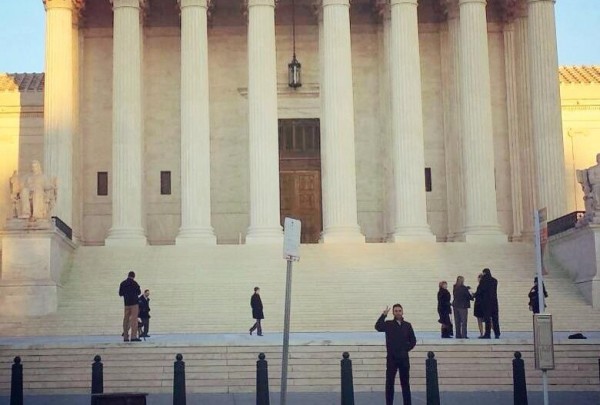 In Rare Protest US Supreme Court Is Disrupted

Above: Kai Newkirk in front of the US Supreme Court

Protester disrupts the Supreme Court over its Citizens United decision

“Just released from jail after disrupting a Supreme Court session yesterday to raise up the voice of the vast majority of Americans who believe democracy should be about everybody’s votes not billionaire’s dollars. Went back to pick up my stuff. Back to work to build this movement to end corruption. Thanks to everyone for the support.” Kai Newkirk Facebook post.

A rare disturbance broke out Wednesday during oral arguments at the Supreme Court when a lone protester at the back of the ornate room rose and loudly urged the court to overturn its 2010 ruling in Citizens United, which opened the door to unlimited corporate campaign contributions in elections.

“I arise on behalf of the vast majority of the people of the United States who believe that money is not speech,” the protester said, “corporations are not people and that our democracy should not be for sale to the highest bidder.”

The protester, identified by a court spokeswoman as Noah Newkirk, of Los Angeles, said the court should “overturn Citizens United”  and that “the people demand democracy,” before several Supreme Court police officers arrested him. He was charged with violating a law against making “a harangue or oration, or utter[ing] loud threatening or abusive language in the Supreme Court Building.”

A video, probably the first ever of a disturbance inside the high court surfaced Thursday.

The court became aware of the video Thursday, the spokeswoman said in a statement,  adding, “Court officials are in the process of reviewing the video and our courtroom screening procedures.”

The justices are rarely interrupted by protest inside the chamber. The most memorable, certainly the most colorful, was in 1983, when famed Hustler magazine publisher Larry Flynt was arrested after screaming obscenities at the justices from his gold-plated wheelchair in the rear of the courtroom.

“- – – – this court. You denied me the counsel of my choice,” we wrote at the time. He shouted at the startled justices as he opened a white jacket that had concealed a black T-shirt emblazened with a similarly obscene attack on the court.

He continued to shout obscenities as the police wheeled him out behind the stunned audience, which included a constitutional law class from Severna Park high school. One of the students asked whether this mayhem often happened at the court. (We assured him it didn’t.)