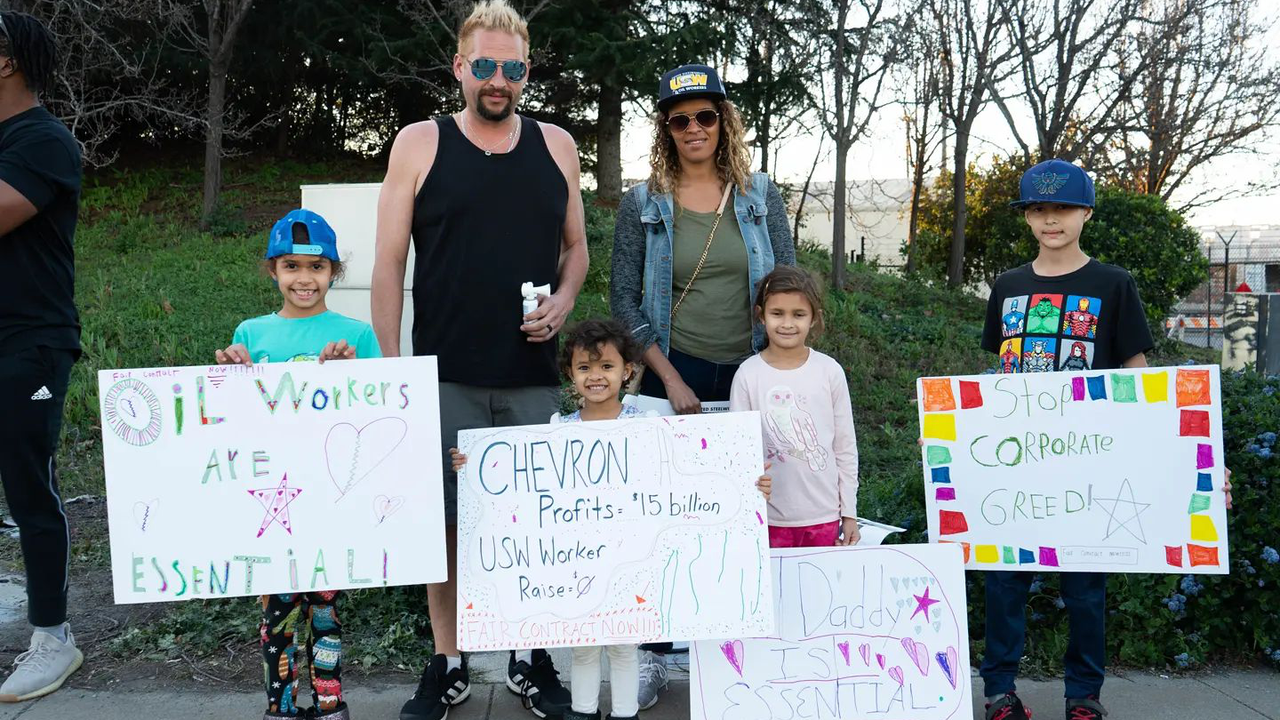 Nearly 600 oil workers at Chevron’s Richmond, California refinery walked out on strike early Monday morning after rejecting two local contract proposals pushed by the United Steelworkers (USW) union. The refinery workers are demanding higher wages, shorter work hours and better health and safety protections after laboring up to 70 hours a week and risking their lives as “essential workers” throughout the pandemic.

The strike by the Chevron workers—the first at the facility since the nationwide strike in 1980—is a thorough rebuke to the USW. Over the last month, the USW has been trying to bully 30,000 oil refinery and petrochemical workers at a dozen energy companies across the country into accepting a four-year national agreement dictated by Big Oil and the Biden administration. The deal includes a first-year raise of only 2.5 percent and average annual pay hikes of 3 percent, which would result in a substantial loss in real income given the 40-year high inflation rate of 7.9 percent and an ever-greater spike in the price of fuel, food and health care.

On March 12, rank-and-file workers at the Richmond refinery overwhelmingly voted down a local contract based on the USW national agreement. Less than a week later, the USW brought back virtually the same offer to vote on again. In a March 16 letter, the local bargaining committee tried to distance itself from the renegotiated deal, admitting the company’s “Last, Best and Final” offer “doesn’t look much different than the one you voted down last week.”

On Sunday, local officials announced that the deal had been rejected again and that the “membership made it loud and clear” it “would not stand for the Company’s greed.” They said the company refused to negotiate further and the 24-hour rolling [contract] extensions agreed to by management and the USW since the national contract expired on February 1 “have been pulled.”

As the midnight strike deadline approached, union officials said, the company refused to allow workers to carry out the “safe and orderly” shutdown of the refinery to protect surrounding communities from gas releases or explosions. Instead, union workers were bussed out of the facility and replaced with 100 nonunion personnel not trained to run the refinery. Nevertheless, Chevron declared that it was “fully prepared to maintain normal operations” at the 245,000 barrel-per-day plant, which produces gasoline, jet fuel and diesel fuel.

Local 5 Vice President B.K. White told the local media that the union “asked for a 5 percent bump to help us out a little bit with our medical at Kaiser [health insurance costs], which went up 23 percent last year.”

Chevron, which made $15.6 billion in 2021 profits and is spending $5-$10 billion every year on stock repurchases to boost shareholder income, offered workers a 2.5 percent raise. The company denounced the Richmond local’s meager pay demands, saying they “exceeded what the company believes to be reasonable and moved beyond what was agreed to as part of the national pattern bargaining agreement” signed by USW International President Tom Conway and the national bargaining committee, led by Mike Smith.

The San Ramon, California-based multinational energy corporation is one of the largest companies in the world and one of the “Seven Sisters” that dominated the global petroleum industry from the mid-1940s to the 1970s. After its $45 billion acquisition of Texaco in 2000, Chevron became the second largest oil company in the United States, behind ExxonMobil. The company, which is active in more than 180 countries, is engaged in every aspect of the oil and natural gas industries, including hydrocarbon exploration and production; refining, marketing, and transport; chemicals manufacturing and sales; and power generation.

The company cut 1,500 jobs, or 2 percent of its global workforce, as crude oil prices tumbled after the onset of the pandemic. Rather than restoring the jobs, it has worked current workers to the max even as Chevron, like the rest of the oil giants, reaps huge profits from the record rise in crude and gas prices, which has been accelerated by the war in Ukraine and moves to cut off Russian exports.

The USW kept workers on the job for more than three weeks after the February 1 expiration of the previous labor agreement, even though workers were in the strongest position ever to strike and win substantial demands. Then suddenly on February 25, the day after the Russian invasion of Ukraine began, and just three days after attending a virtual meeting with Biden, USW President Tom Conway announced the tentative agreement with Marathon, the lead negotiator for the industry.

There is no doubt that Biden instructed Conway to accept the deal and prevent an oil worker strike, which could have crippled two-thirds of the country’s refinery capacity as the US ramped up its confrontation with Russia. Days later, Conway boasted that he has reached a “responsible deal” that did not add to “inflationary pressures.”

Since then, rank-and-file workers at Marathon, BP and other corporations have reported to the World Socialist Web Site that USW has tried to blackmail them into supporting the deal. At “informational meetings,” USW International, regional and local officials told workers they would be put on months-long, fruitless strikes, with little or no strike pay, if they rejected the national or local deals. Where workers have stood up to this blackmail, including at the Phillips 66 refinery in Billings, Montana, the USW has forced them to vote on the deal again until it passed.

Hanging over workers’ heads is the miserable betrayal by the USW of the Beaumont, Texas refinery workers locked out by ExxonMobil for 10 months. After isolating and starving out these workers, the USW rammed through a local contract, which stripped workers of seniority and job classification rights and quadrupled the probationary period for new hires to 24 months, creating a new tier of low-paid at-will employees to replace higher-paid, experienced workers.

The stand taken by the Richmond Chevron workers has inspired oil workers across the US. A Marathon worker in Texas and a member of the Oil Workers Rank-and-File Committee (OWRFC) said, “The courageous workers at Chevron’s Richmond refinery were able to see through the lies being fed to them by USW. They are ready and willing to fight to get the fair contract that they, and all oil workers, deserve. The OWRFC stands in solidarity with these workers. The illegitimate national agreement pushed through by USW is an act of betrayal and should be opposed by all workers. While the oil companies are making more money than ever, they see fit to lower the standard of living of all US oil workers through a sell-out contract, and the USW is willing to help them make it happen.

“All oil workers should prepare for a national strike. We cannot allow our brothers and sisters in Richmond to suffer the same fate as those in Beaumont. USW will isolate them and conspire with the company to starve them into signing a contract that worsens their working conditions and standards of living. United, we can win this fight for the fair contract we all deserve.”

A worker at the BP refinery in Whiting, Indiana who spoke to the WSWS denounced the isolation of the Chevron workers by the USW. “So, we signed and now they are out on their butts alone?! This is wrong on so many levels and the fact we had no idea they were going out. It’s another aggravating reason why we have said communication was nonexistent. Now we are signed and ratified, and another group is left behind.”

On Monday afternoon, he added: “We got a blanket text from the national USW propaganda machine saying we are standing in solidarity with the 500 workers in Cali. Yet no info as to how or what measures and steps are being taken and acted upon to show more than the useless cliche of thoughts and prayers of the do nothing crowd out there. I’m sure they will follow up with pictures and exploit the striking workers as they push their boundaries. I can’t wait to connect with these workers, to relate and develop a support group.” He pointed to the need for a common struggle against both the oil companies and the USW.

With growing demands by workers for substantial wage increases to combat the ravages of inflation, the Biden administration is no doubt considering an intervention to break the strike before it becomes a catalyst for far broader struggles, including among West Coast dockworkers, striking educators in Minneapolis and other cities, and railroad workers at BNSF and Canadian Pacific, where 3,000 locomotive engineers and other workers are currently striking in Canada.