In Red Pairs: Handmaids Are Resisting

Above Photo: At the Ohio hearing. Photo by Cleveland.com

Women occupying senators’ offices Friday aren’t alone in resisting the all-male “declaration of war on women” that would be repeal of Obamacare and enactment of a GOP health plan widely blasted as “catastrophic.” Getting creative, women from Texas to Ohio have increasingly been protesting assaults on women’s health care by dramatically donning red robes and white bonnets to channel Margaret Atwood’s dystopian-themed “The Handmaid’s Tale,” wherein women are forced to bear children in a totalitarian society. Their goal: To remind persistently-backwards-looking conservatives that Atwood’s vision of women defined purely by their reproductive capacity is not, in fact, “an instruction manual.”
Atwood’s 1985 novel depicts women stripped of their rights in a theocratic, patriarchal, not-so-distant Gilead – aka America – rendered barren by environmental disaster, where fertile women, or handmaids, must bear the children of regime leaders and are controlled by them. Initially seen as a cautionary tale, the book has seen new life as a hit TV show on Hulu; it gained new resonance when Trump got “elected” in the middle of filming. Atwood has long argued its premise is based on old, real human themes: Historically, she notes, “There is no totalitarianism worth its salt that doesn’t try to control women.”
Women’s and reproductive rights advocates likewise argue the flood of GOP-led, anti-abortion legislation in recent years represents “steps on the same path” as Atwood’s Gilead. Those steps backward have perhaps been most notable in Texas, the most populous GOP-controlled state, a national model for conservatives and the first place the handmaids appeared, thanks to the ingenuity of Fight Back Texas and other pro-choice forces. Last month, costumed handmaids gathered at the Capitol to chant “Shame!”, document restrictions passed by Gov. Greg Abbott and his GOP cronies, and denounce four more now pending. They include a bill banning taxpayer money for abortion providers, a ban on the most common method of second-trimester abortion, and a bill requiring fetal tissue to be buried or cremated – that, despite an existing court-ordered block against such Gilead-like barbarism.
Handmaids have also appeared in Missouri, and, this week, in Ohio, where Gov. John Kasich has passed over a dozen laws restricting abortion, and eight of the state’s 16 abortion clinics have closed or ceased abortion services. In its latest salvo aimed at overturning Roe v. Wade, Ohio Right to Life (sic) is pushing a law that would ban what they call “dismemberment abortion,” and what doctors call “dilation and evacuation,” the procedure used in about 95% of second-trimester abortions and many miscarriages. In a protest organized by NARAL Pro-Choice Ohio and other groups, the visually flamboyant handmaids sat in the front of Senate hearings, then quietly drifted through the building in pairs, as Atwood’s handmaids do. Anti-choice critics argued they made a “mockery” of the issue; pro-choice forces countered they’re dead serious. With the new proposed laws, one insisted, Atwood’s future vision “is not so unrealistic, and not so distant.” 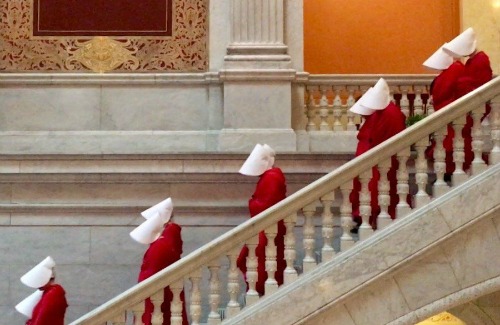 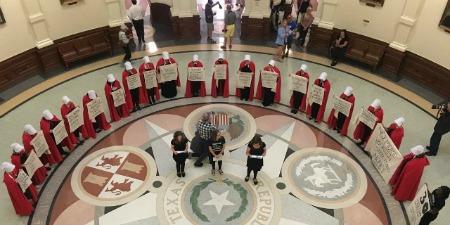