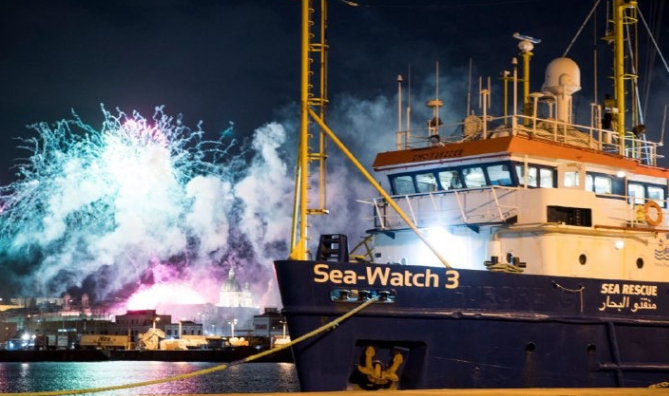 In Sea-Watch And No More Deaths Cases, Courts Rule That Saving Lives Isn’t A Crime

Above Photo: Fireworks celebrate the release of Sea-Watch 3. (Sea-Watch)

Recent rulings in the United States and Italian courts have favored the humanitarian aid and rescue organizations, but efforts to criminalize such work continue.

After six months of detention at the Sicilian port of Licata, the Sea-Watch 3 humanitarian search and rescue ship is now free to resume its operations in the Central Mediterranean. On Dec. 19, Sea-Watch, a German NGO, finally won an appeal to the Italian civil court securing the ship’s release. Human rights advocates deemed its confiscation and sustained detention to be both illegal and racist — with the aim of preventing the ship from rescuing primarily black Africans and bringing them to Italy for safe harbor. The ship’s release comes at a time of year when migration across the treacherous Mediterranean is at its lowest due to plunging winter temperatures.

Similarly, 6,000 miles away in Tucson, Arizona, Scott Warren — a volunteer with the humanitarian aid organization No More Deaths — was also recently exonerated of the “crime” of saving lives. Warren was in and out of court for nearly two years and faced up to 20 years in prison, following his arrest in January 2018. He was accused of harboring people, as well as conspiracy — all because he gave food, water and shelter to two undocumented young migrants from Central America, who had crossed into the United States from Mexico through the harsh Sonoran Desert. A jury found him “not guilty” on Nov. 20 after less than three hours of deliberation.

Meanwhile, Sea-Watch 3 Captain Carola Rackete, who was arrested and detained with the ship on June 26, had the charges against her dropped three days later by an Italian criminal court. She was facing 10 years in prison for resisting a warship and assisting illegal immigration, due to her landing in the Port of Lampedusa with 42 rescued migrants on board. This came after a 17-day standoff in which Italy refused safe harbor to the boat in violation of international conventions safeguarding human rights and protocols of sea rescue.

Since the election of right-wing Interior Minister Matteo Salvini in 2018, Italy has been successful in shutting down most search and rescue operations conducted in the Central Mediterranean. It has also pushed a hard-line immigration policy, closing ports to rescue ships and demanding that other European countries take migrants rescued at sea. Italy’s attack on the Sea-Watch 3 and its captain sent the message to search and rescue organizations that bringing rescued migrants to Italy will be prosecuted as a crime.

A similar message is being sent in the United States. Despite failing to put Scott Warren behind bars for a second time, the U.S. Attorney’s office still wants human rights organizations along the U.S.-Mexico border — as well as throughout the United States — to know that those who provide humanitarian aid to undocumented migrants will be prosecuted.

No More Deaths was founded by a handful of civilians in the 1990s to provide water and food for migrants who make the deadly, and unauthorized, trek across the Sonoran Desert. According to No More Deaths, the desert has claimed the lives of at least 7,000 migrants who have tried to cross it since the 1990s. Meanwhile, Sea-Watch has saved the lives of 37,000 rescued migrants since its advent in 2014. Most were actually brought to Italy as the closest safe harbor, in accordance with the U.N. Commission for the Law of the Sea.

The criminalization of these organizations, as well as their volunteers, is emblematic of the growth and resurgence of rising racism and xenophobia in many Western countries — spawning a culture that seeks to persecute and punish humanitarian aid workers rather than welcome the tired, hungry, poor and oppressed. What’s more, instead of stemming the tide of migration by addressing the political and economic root causes — in which these Western countries are complicit — they seek to project and deflect the ills of the world onto the victims themselves, along with those who seek to rescue them. As a result, humanitarian aid organizations find themselves increasingly challenged and criminalized by governments as they attempt to save lives.

These two verdicts in favor of Sea-Watch and No More Deaths, as well as the release of the Sea-Watch 3, confirm not only the lack of a legal basis for the criminalization of humanitarian aid, but also the political motivation behind it.

According to Sea-Watch Chairman Johannes Bayer, “After long months of criminalization, intimidation and blockade, today’s judgment is yet another confirmation of the legality of our work — a job that Sea-Watch is demanding from the responsible institutions of the E.U. member states. The ruling once again proved that it is civil rescue organizations like Sea-Watch that abide by the law.”

Following his exoneration outside of the courthouse in Tucson, Warren echoed a similar sentiment, saying, “The government failed in its attempt to criminalize basic human kindness.”

Sea-Watch spokeswoman Haidi Sadik told the Morning Star that — although the decision to free the ship was welcome — it came many months too late. “It seems that in Europe, we have become so accustomed to this level of abuse of power, so comfortable in this culture of violation with impunity, that ‘allowing’ a civil rescue ship to do its work is seen as a generosity,” she said.

On Nov. 6, an audience of 350 people gathered to hear Sadik and Warren speak on the topic, “Humanitarian Aid on the Border: From the Mediterranean Sea to the Sonoran Desert,” at Grace Saint Paul’s Episcopal Church in Tucson. This was the first gathering and symposium of its kind:  bringing Sea-Watch, which is saving the lives of “people on the move” drowning in the Mediterranean, with No More Deaths, which is saving lives in the Sonoran Desert of Arizona, and the Canadian Sanctuary Network, which is receiving refugees fleeing from the United States and elsewhere to Canada.

The event was part of the third annual gathering of the International Sanctuary Declaration Campaign, which visited sanctuary and migration justice organizations in Arizona, Texas, Mexico and New York. The convening of 20 international delegates from Germany, Italy, the Netherlands, Kenya, Eritrea, Ambazonia, Canada, the United States and Mexico centered around two common themes: “Humanitarian aid is never a crime” and “the new normal of displacement.”