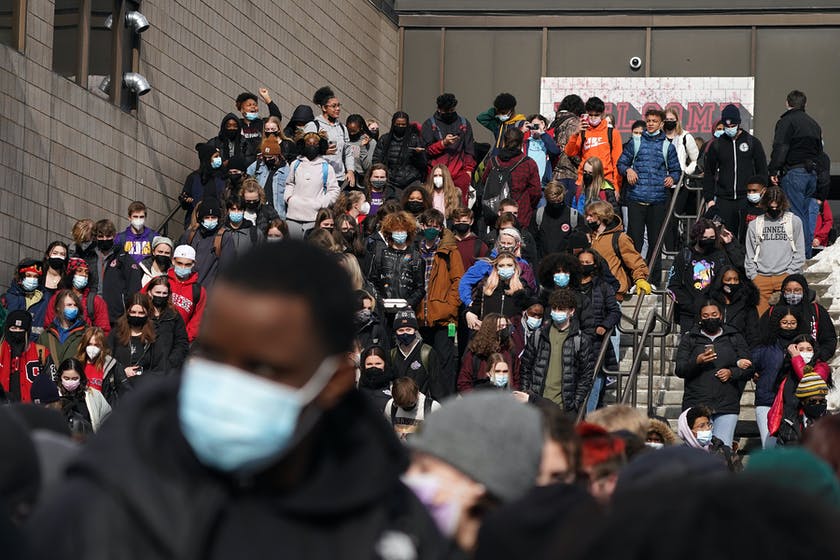 Teen activists from schools across the Twin Cities walked out of class Tuesday.

Hundreds of Twin Cities-area students walked out of class Tuesday to protest the fatal shooting of 22-year-old Amir Locke, a Black man who was killed by Minneapolis police serving a no-knock warrant at a downtown apartment.

Locke was not the subject of the warrant.

Students from across the Twin Cities gathered for the rally and march, including pupils from Lakeville, Hopkins, St. Louis Park and Minnehaha Academy in Minneapolis.

The activists said they are demanding the resignations of Minneapolis Mayor Jacob Frey, interim Police Chief Amelia Huffman and Hennepin County Judge Peter Cahill, as well as the demilitarization of Minneapolis police.

Several Black students spoke about the traumatic impact of seeing constant news coverage of people who look like their fathers, uncles, brothers and cousins being killed.

“We never get to experience full comfortability no matter who we are or who we are with,” Grace Mutombo said.

Some students from Benilde-St. Margaret’s in St. Louis Park, including Raphael Johnson-Nixon and Deandre Mayaka, got a ride to the protest.

“I’m tired of seeing Black men who look like me killed for no reason,” freshman Johnson-Nixon said.

Mayaka, also a freshman, added: “I find it really unsettling how someone of our skin color has to be aware of what they’re doing, how they’re presenting at all times.”

After a series of speeches in front of the high school, a loudspeaker blared Kendrick Lamar’s “Alright” as protest organizers led rallygoers into the street.

They marched south down Lexington Parkway before turning onto Summit Avenue. At the march’s peak, protesters walked side-by-side across the four lanes of Lexington Parkway and filled about 1½ neighborhood blocks.

Outside the governor’s residence, protest organizers told the crowd they were impressed by the turnout after making the call to walk out two days ago. They also stressed the importance of protest.

“If we stop, they’re going to keep killing us,” said Ezra Hudson, a co-founder of MN Teen Activists. “They don’t care.”

“We should be Black and proud, not Black and scared,” she said.

Leslie E. Redmond, who until late 2020 was the president of the Minnesota chapter of the NAACP, joined the students at the governor’s residence and urged them to run for office once they’re eligible as well as to vote.

Tuesday’s protest follows similar demonstrations over the weekend in response to Locke’s killing.

On Sunday, demonstrators gathered in front of Huffman’s home and called for her resignation. Protesters marched peacefully through downtown again Tuesday evening, demanding justice for Locke, an end to no-knock warrants and the resignations of Frey and Huffman.