In Tampa, Food Not Bombs Activists Arrested For Feeding Homeless—Again

Above Photo: Two activists with Food Not Bombs are handcuffed after they defied police orders to stop feeding the homeless in a downtown Tampa public park.Anthony Martino

Temperatures were dipping into unfriendly territory Saturday afternoon as sports fans flocked to the events at Curtis Hixon Waterfront Park.

At nearby Lykes Gaslight Park, members of Tampa’s homeless community were gathered for hot coffee and bagels, courtesy of the group Food Not Bombs.

There were no altercations, no illicit substances, no bad behavior—unless you count that, according to the City of Tampa, that coffee and bagels were illegal.

Because you have to have a special permit in order to offer free food to the needy in city parks. But obtaining a city permit to feed the homeless twice a week—to set up a table and open bags of chips and bagels and spoon organic beans and rice from a pot—can be pricey because of the insurance policy the city requires.

Given how often they do it (homeless people have to eat frequently, too), that can add up.

Volunteers with Food Not Bombs knew their actions were technically illegal. They had been warned about it earlier in the week.

And they did it anyway. 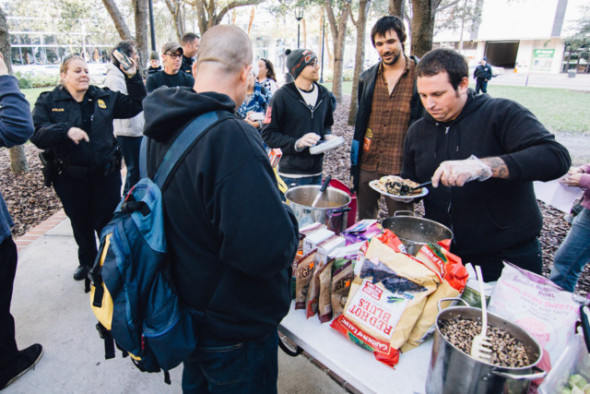 As a result, seven people were arrested. For feeding hungry people in a park.

Some were arrested still wearing the plastic gloves with which they served food.

When police arrived on the scene, they gave the activists three minutes to stop feeding those in need.

Then, they moved in, pulling the volunteers away as they continued to serve.

“Please help yourselves,” one could be heard saying to those still gathered as he was dragged off.

A man who reached for a last-minute bagel was also arrested. (Watch a video of the arrests, courtesy of Erin Sauer, below). 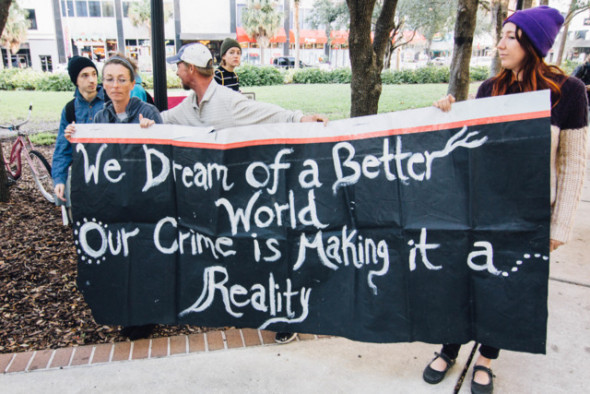 In an email sent to press Saturday night, the group said it “has no plans to stop sharing food with the homeless and hungry and will continue to defy unjust laws that criminalize compassion and mutual aid.”

That includes a planned gathering Tuesday at 8 a.m. in the same location.

“We intend to expose the city’s cruelty in the face of thousands in our community who are struggling with issues of food insecurity, mental and medical health issues, poverty, and homelessness,” a spokesperson for the group said in an email. “If the city will not address these problems, the least they can do is not get in the way and stop others from addressing these needs. Compassion should never be criminalized.

In Tampa, the group said it has done the same thing in the same park over 100 times with no trouble, and some suspect it has something to do with the College Football Playoff National Championship and related events taking place in Tampa throughout the weekend.