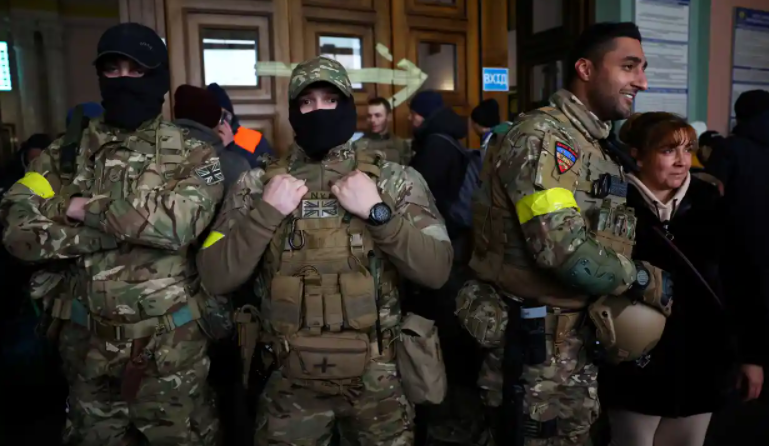 In The Heart Of The Beast

Above photo: UK ex-service personnel, including former marine Ben Grant (right), pose for a picture in Lviv as they prepare to depart towards the frontline. Kai Pfaffenbach/Reuters.

On February 27th, the British Foreign Secretary Liz Truss said she supported individuals from the UK who might want to go to Ukraine to join an international force to fight the Russians.  After all, this is a fight between Good (Ukraine/NATO/the West) and Evil (Putin/Russia/the East).

In an interview on BBC One’s Sunday Morning programme, the UK foreign secretary replied “absolutely” when asked whether she would back anyone wanting to volunteer to help Ukrainians “fighting for their freedom”.

She told the programme: “The people of Ukraine are fighting for freedom and democracy, not just for Ukraine, but for the whole of Europe.”

Yet by March 10th, speaking at a Washington press conference alongside the US Secretary of State, the oleaginous British politician claimed, “I have been very clear that the travel advice from the United Kingdom is not to go to Ukraine…”

Her own department’s website stated that those who travel to eastern Ukraine to “fight, or assist others engaged in the conflict” could be prosecuted on their return to the UK. This is down to the Foreign Enlistment Act, which is still legally binding.

Notwithstanding, British volunteers have answered the call to defend the coup-founded state without encountering any obstacles from their home country.

On March 16th The Telegraph, the British establishment’s flagship newspaper, posted  a story regarding two such volunteers. Both were medical volunteers who claimed the Ukrainian army duped them into crossing the border before trying to conscript them as “cannon fodder” for the battle of Kyiv.

In spite of initial assurances that they would be used as medics not combatants, once across the border they were told they would have to join the international legion: “the Ukrainians wanted to take our passports off us, sign a year contract, give us training for two days – 48 hours – and then within another 48 hours we would be fighting,” said Carl Walsh.

Walsh added, “These boys, some of them had no military experience; they were being told they would have 48 hours of training and then they are straight on the front line. It’s a death wish.”

All this exposes the naïveté of those duped by the wall-to-wall propaganda the population is bombarded with daily, in countries like Great Britain. The war in Ukraine is presented as a “battle against Evil”. The enemy is utterly dehumanised, worthy of the society of Orwell’s dystopian 1984.

It looks likely that among the volunteers the professional British special forces (the SAS in particular) are being given a “proxy nod” to enter the war in Ukraine, which may involve some higher-up planning or, at the very least, that the British authorities are looking the other way.

The SAS (Special Air Service) have often been employed in undercover operations in former Imperialist aggressions, in Iraq, Libya, Syria and Afghanistan.

A “small number” of serving soldiers are admitted by the British Army  to have gone AWOL to fight with those units in the Ukrainian army, which have launched recruiting drives aimed at foreign fighters, such as the Nazi Azov Regiment.

On Saturday 19th March the establishment newspaper The Daily Telegraph reported that these volunteer fighters, most likely from the so-called elite groups like the SAS, are feared to have “triggered a deadly airstrike on a Ukrainian military base” near the Polish border.  The Yavoriv facility, used by the Ukrainian government to train volunteers, was struck by Russian missiles on March 13th.  It appears that the UK phones of these elite soldiers were detected in the area by Russian surveillance technology.

The British establishment’s view of Russia is a hangover from the Cold War: and it was rolled out again last year in The Integrated Review.

The Integrated Review, published on 16th March 2021, is a document that sets out the UK government’s overarching national security and international policy objectives, boasted by Boris Johnson as “the largest review of its kind since the Cold War”.

In its pages the Russian state is described as “fundamentally nihilistic…” and that “Any actions [Russia] can take which damage the West are fundamentally good for Russia”; Russia is “the most acute threat to our security”; Russia intends to “exploit and undermine democratic systems and open economies”.

In fact, unity across the political establishment in Britain appears not to be a problem. There are very few dissenting, even cautioning voices. The strident patriotism emanating from the ranks of the mainstream Labour Party is added to by the sheeplike adherence of many on the progressive left to the NATO militarist line.

One only needs to cite the pusillanimous withdrawal by the 11 Labour MPs of their signatures on a Stop the War Coalition statement that was merely critical of NATO’s eastward expansion. A Labour source told The Mirror (24.02.22): “You can be a mouthpiece for the Kremlin, or a Labour MP. But not both.” This is in line with Labour MP Louise Haigh bleating out the orthodox line, “We stand united with the government and our NATO and European allies.”

Then there is the flush of silly Victorian Empire nostalgia behind the remarks of Foreign Office minister James Cleverly; he gleefully claimed that Ukrainian soldiers are shouting “God Save the Queen” as they fire weapons, provided by the UK, at Russian tanks.

British society is being subpoenaed into the all-consuming “engulf and devour” single narrative, a totalitarian monster actually given real life by the ruling Labour government in 2003 when it was launched as a media offensive to justify the sanguinary imperialist offensive against Iraq.

The idea of any moral or intellectual duty to examine all the facts has been completely submerged by the Narrative, the New Orthodoxy or the Received Version, whichever moniker you fancy.

It remains to be seen whether any real dissent in the UK can gather force in the weeks and months ahead.