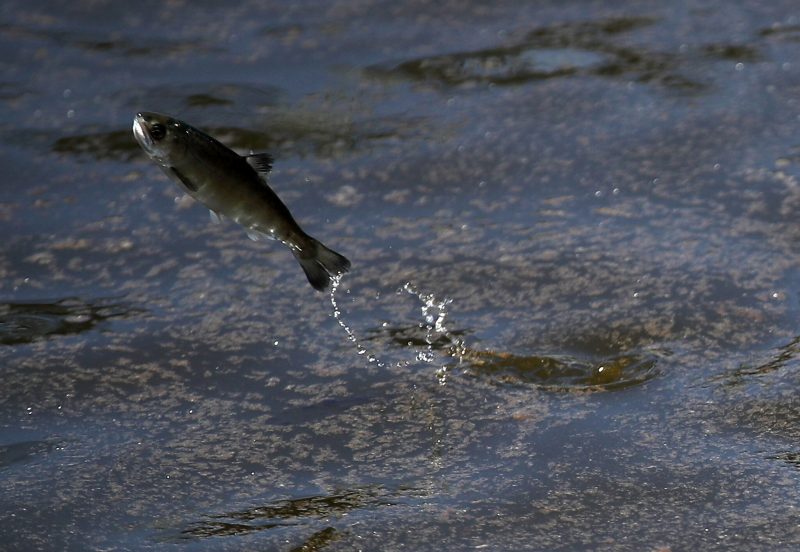 In The Latest Rights Of Nature Case, A Tribe Is Suing On Behalf Of Salmon

Above Photo: A young fingerling Chinook salmon leaps out of the water on May 16, 2018 in Half Moon Bay, California. Justin Sullivan / Getty Images.

The Rights Of Nature Movement Is Spawning Laws And Lawsuits All Over The World.

Salmon—the fish—are suing the City of Seattle in Sauk-Suiattle tribal court, seeking recognition of their legal rights to exist, flourish and regenerate.

The Sauk-Suiattle Indian Tribe filed the complaint earlier this month on behalf of the fish following the city’s construction and operation of off-reservation hydroelectric dams on the Skagit River. The tribe, also asserting claims based on rights the tribe holds, alleges that the city constructed the dams, beginning in the first half of the 20th century, without the tribe’s consultation or consent.

The case is the latest in a series of rights of nature lawsuits emerging in U.S. communities and throughout the world. Rights of Nature laws have also been passed in some places. Last year, the White Earth Band of Ojibwe filed the first rights of nature enforcement action in a U.S. tribal court, seeking to enforce the rights of wild rice against the state of Minnesota. Also last year, five waterways were the plaintiffs in a lawsuit filed against a developer and the state of Florida, alleging that a proposed development violated the waters’ rights to “exist, flow, to be protected against pollution and to maintain a healthy ecosystem.”

The Sauk-Suiattle tribe is asking only for a declaratory judgment, the court’s recognition, but the case could lay the groundwork for future litigation. Should the lawsuit prevail in tribal court, the tribe’s attorney, Jack Flander, said it will register the judgment with the state, which under Washington law is required to give the judgment “full faith and credit.” He also said the tribe may consider filing for an injunction of some sort, depending on how the case unfolds.

The aim of the rights of nature movement is twofold: to give legal rights to the natural world, in a similar way as people, trusts and corporations have specific legal rights; and to shift people’s consciousness, so that they see their relationship to the natural world as one in a fellowship of  living beings, instead of seeing nature as a “thing” or property that can be owned, and in some cases, destroyed. The movement draws heavily on Indigenous worldviews.

In the salmon case, the Sauk-Suiattle allege that the dams impede the migration and spawning of salmon, known as Tsuladxw, leading to the collapse of salmon populations in the tribe’s traditional waterways.

“The city has done things that affect tribal members and the salmon, which under the tribe’s worldview is part of their people,” Fiander said. “Just like in state courts where adults are allowed to represent minors, tribal members have filed this lawsuit on behalf of a relative they deem a part of their life.”

The City of Seattle declined to comment on the lawsuit.

The Skagit River snakes through the Cascade mountains and across the tribe’s ancestral lands and flows into the Puget Sound. The river, and the salmon that swim through it, are deeply intertwined with the tribe’s culture, spiritual practices and diet.

“Tsuladxw has been a part of our traditional stories, teachings, lifeways and spirituality since the earliest times to the present day. For the Sahkuméhu, Tsuladxw is alive like all living creatures and they are our relations,” the tribe, also known as the Sahkuméhu, wrote in the complaint.

The tribe, which has about 300 members, said one of its highest values and most important oral laws is respect for all of the Earth and its spirits: “…humanoid, animal, and spirit forms always had the same emotions and sensibilities as humans…These are natural laws of the Creator.”

The Sauk-Suiattle’s lawsuit doesn’t ask that the tribal court order the removal of the dams, but instead seeks a declaratory judgment of the following:

The lawsuit was filed, in part, to put on public record the tribe’s worldview about the natural world, according to Fiander, who is a member of the Yakama Nation.

“Had this case arose 20 years ago, the world might not have been ready for it. But given everything going on in the world, including climate change, these cultural views are ready to be heard,” he said. “It’s becoming more and more apparent that the tribe’s view that all things are connected is right. If we don’t protect the salmon, it will lead to a chain of catastrophic events.”

The lawsuit also invokes the tribe’s own legal rights. Like the earlier White Earth Band of Ojibwe’s wild rice lawsuit, the Sauk-Suiattle’s complaint invokes a 19th century treaty in which the tribe ceded its territory to the U.S. government, in exchange for guarantees that they would retain certain legal rights on their traditional lands, including the rights to fish, hunt, gather and travel. Those traditional lands encompass off-reservation land now held by the state of Washington and private parties.

The city’s construction of dams, which allegedly caused the collapse of salmon populations, violates these treaty rights, according to the complaint. At one time, salmon in the Skagit River numbered in the tens of thousands, but their population has dropped into the hundreds, with species like the Puget Sound Chinook listed as threatened under the U.S. Endangered Species Act.

To protect the salmon, the tribe says it has partially refrained from its customary fishing practices and asked the city to build “fishways,” a means for the fish to move around the dams. Still, the city has blamed the tribe for the drop in salmon populations, according to the complaint, leading to “harassment, intimidation and violence” carried out against tribal members.

“Sahkuméhu have experienced fishing gear being stolen, nets being slashed, verbal harassment, and objects such as barrels being thrown in the rivers upstream from where they are to purposely entangle their nets and prevent them from capturing Tsuladxw,” the complaint says.

The harassment, coupled with the loss of income and food from collapsed salmon populations, has weighed heavily on some tribal members, Fiander said.

He continued, “The tribe, one of the most impoverished tribes in the nation, has a 19-acre reservation in a remote area of the Cascade mountains with little economy to rely on. When you have a decline in a resource they relied on to eat and sell, that can easily spiral into things like depression. All things are connected.”

Many of the rights of nature laws emerging around the world—in nations from New Zealand to Uganda and Ecuador—have existed in the oral laws of Indigenous peoples for centuries.

That is the case with the Sauk-Suiattle Indian Tribe, who highlighted in the complaint the distinction between their oral traditions, which often take precedence over written laws, and Western legal systems where “written law is the highest form of law.”

“Native tribes are rich in unwritten traditional law and tribal Elders are cornerstones of traditional wealth. Unwritten law, sometimes called ‘natural law’ or the ‘Creator’s law,’ is found in values, beliefs, practices, customs, traditions, and in the ways problems are solved,” the complaint says.

The Sauk-Suiattle base their claim that salmon have inherent rights on what they call “natural laws of the Creator,” principles similar to the philosophy behind Thomas Jefferson’s claim in the Declaration of Independence that all men “are endowed by their Creator with certain unalienable Rights.”

“Tribal oral laws that came from their creator should be recognized just as much as outside jurisdictions that say the same thing,” Fiander said.

If successful, the Sauk-Suiattle’s lawsuit could encourage other tribes to assert traditional rights of nature laws without having written law in place, according to Thomas Linzey, senior legal counsel with the Center for Democratic and Environmental Rights, which assisted with both the wild rice and Florida waterway litigation.

The Sauk-Suiattle, like other Indigenous peoples around the world, have begun to codify, or legalize in writing, their traditional laws. The laws are a melding between Western and Indigenous legal systems, an idea first laid out by California law professor Christopher Stone in a 1972 law review article, “Should Trees Have Standing?” The Sauk-Suiattle cite a passage from that article in their complaint:

“Each time there is a movement to confer rights onto some new ‘entity,’ the proposal is bound to sound odd or frightening or laughable. This is partly because until the rightless thing receives its rights, it cannot be seen as anything but a thing for the use of ‘us’—those who are holding property rights in them at the time.”

The city of Seattle has until Jan. 26 to file a response to the complaint.

Last year, the Sauk-Suiattle tribe filed two other lawsuits against the city and its electric utility provider related to the dams on the Skagit River. The first, filed in Skagit County Superior Court, asks the court to require the city to provide fishways around the dams. The case was removed to federal court and dismissed on grounds that the city, tribe and other parties had previously agreed to a mitigation plan that did not include the construction of fishways. The tribe has filed an appeal with the U.S. Ninth Circuit Court of Appeals.

The second lawsuit, filed in September 2021 in King County Superior Court, aims to stop the city’s electric utility from branding itself as fish- and environmentally-friendly. In December, the defendants filed a motion to dismiss the action, which is pending with the court.

Meanwhile, the Federal Energy Regulatory Commission is in the midst of relicensing operation of the dams, which will be finalized in 2025. The dams’ effect on salmon populations is a central issue in the relicensing process.

Fiander, who is an honorary member of the Sauk-Suiattle tribe, voiced frustration that the city’s electric utility company hasn’t invested in low-cost technologies that give fish a means to circumvent the Skagit River dams, such as fish ladders. He also hopes that courts, and the public, are ready to embrace the idea that non-human beings have rights.

“It wasn’t that long ago that the idea that people have a right to an attorney or a right to privacy was a new thing and unheard of,” he said. “New things can be recognized. And given what’s going on in the world—the world is on fire—it’s time to recognize a new way of thinking.”