In These Times, Popular Resistance Is Essential

These are times of great challenges and opportunities for those who believe in economic, racial and environmental justice as well as peace. The next decade has the potential for achieving positive transformational change. We are working to educate, organize and mobilize ourselves to take advantage of that opportunity.

Popular Resistance made progress this year and has plans for next year and beyond. Doing this work requires resources. We refuse to commercialize the website with ads or to create paywalls. Everyone should have access to this information. The non-profit industrial complex, a part of the power structure, is not going to fund this work, so we must raise money in other ways. We need to raise $30,000 to meet this fiscal year budget.

*When you donate $35 or more, you can pick one item from the Popular Resistance Store and we will send it to you. Just email us at info@popularresistance.org and indicate what you want. 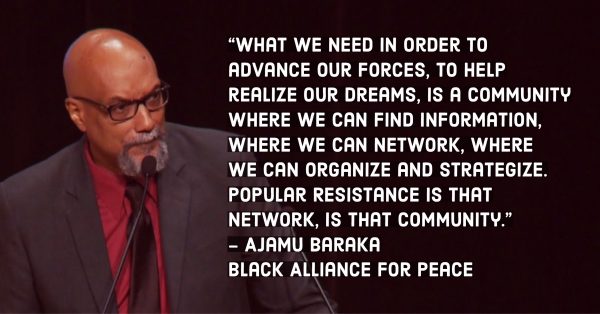 We did this school because we were being asked by many people what they should be doing and how the movement is going to achieve its goals. We will be upgrading the Popular Resistance YouTube page in 2019 to highlight and better share the school, plus other videos.

We are also working on turning the series into a book. And, we are interested in sharing the school in other ways, e.g. abbreviated versions for house parties or other meetings. In order for the movement to take advantage of the potential of the 2020s we need to have a well-educated group of leaders who understand their roles and how to succeed. 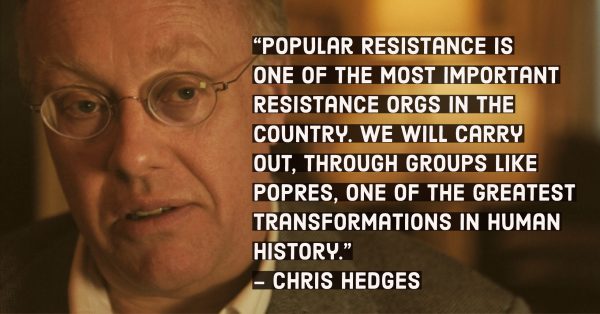 Media for the Movement

Independent and social media are having an impact on the national political dialogue. As a result, the government and corporate powers are fighting back to limit our influence. Popular Resistance sees media as a critical front of struggle and has been expanding our media efforts.

The centerpiece of Popular Resistance’s work continues to be daily reporting on the movement and its developments. We updated our website this year and built a small studio for the Popular Resistance podcast, Clearing the FOG. Each week, we interview activists, movement researchers or thought leaders. We also analyze current news not covered by the “Forces of Greed.” You can subscribe here and let people know about the podcast.

To fund the project, we started a Patreon page, see Patreon.com/ClearingTheFOG. All patrons receive our new weekly podcast, Thinking It Through, where we provide in-depth discussions of what the movement is doing and can do to resolve important issues. In 2019, we hope to create a regular video-cast that will examine movement campaigns and issues and to start a podcast network.

We have been dealing with the challenges of independent and social media being limited by search engines, Twitter and Facebook. We are moving away from Facebook and onto MediaRevolt.org. We encourage you to sign up for our daily digest so you won’t miss out on movement news and so we can alert you about important actions. Share Popular Resistance. These days, we all need to be the media. 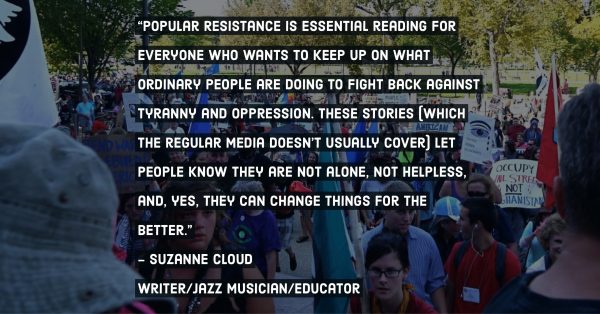 In addition to being a news and education site, we also organize campaigns. One campaign that is growing and developing the power to win is the campaign for National Improved Medicare for All. Our single payer campaign, Health Over Profit for Everyone, held an action camp in April and has a strategy retreat planned in December. We hold regular national calls to educate and organize. Everyone is welcome to participate in those calls.

This year, we took on the challenge, with other organizations, of stopping the Trump Military Parade. Popular Resistance was part of a core group of organizations that helped to build opposition to this glorification of militarism and created a coalition of more than 250 organizations. When the parade was cancelled, we decided to plan a strategy meeting for broadening and strengthening the peace movement.

A Peace Congress will take the place of the Trump military parade on November 10 in Washington, DC. The Congress will be a General Assembly of activists discussing the strengths and opportunities of the movement, how to weaken the pillars of power that hold militarism in place and next steps. Among the projects planned for next year is a mass mobilization when NATO comes to Washington, DC for its 70th anniversary on April 4, the anniversary of Martin Luther King, Jr.’s death. We will link the wars abroad with the wars at home and call for an end to NATO.

Related to this is Popular Resistance’s work with a number of peace efforts, World Beyond War, the No US Foreign Bases Coalition and the Women’s March on the Pentagon. We serve on their advisory boards. We helped to plan the inaugural conference for the No US Foreign Bases coalition and participated in the September World Beyond War Conference in Toronto. We head to Dublin, Ireland next for the No US NATO Bases conference and will then head to The Hague to deliver a letter calling for a full investigation into Israel’s war crimes. We’ve been invited to Iran for a peace delegation, which we hope to attend if we have the resources.

We’ve also increased our work on Latin American solidarity. Kevin visited Venezuela during the 2018 presidential election and wrote about what occurred. Popular Resistance is working with a coalition of organizations and people to expose the US’ attempted coup in Nicaragua and counter the false narrative of the corporate media and nonprofits allied with the two parties. We published a detailed account correcting the record on Nicaragua. We joined the Honduras Solidarity Network and hope to bring activists to Colombia to support peace efforts there.

When the Trump administration announced radical restrictions on our right to assemble and freedom of speech in Washington, DC, Popular Resistance joined a coalition of organizations fighting back. We, along with others, let our members know of the threat and you responded. In a week we went from under 2,000 comments to over 100,000.

Popular Resistance submitted a lengthy comment that examined the impact of protest in Washington, DC on key issues. Kevin Zeese provided a detailed affidavit that went into further detail. These documents were written to provide litigators the evidence they need to argue these issues in court and to provide judges with authoritative reasons why our First Amendment rights need to be expanded, not curtailed. In 2019, the coalition will campaign to change the narrative of Freedom of Speech and build consensus on protecting the right to protest.

Popular Resistance has continued to build its campaign for trade for people and planet since we helped build a massive coalition that stopped the Trans-Pacific Partnership. Now, we are positioned to fight the Trump administration’s NAFTA2. The proposed changes  to NAFTA are more rigged corporate trade and fail to put people, workers, health and the safety of the planet first. Join Trade for People and Planet. Our first national call on NAFTA is November 13 at 9:00 pm Eastern. We need to be active now because the new NAFTA will go to Congress for ratification in early 2019.

The campaign for net neutrality, which we won under President Obama, continues to be fought in the Trump era. We have been helping to build grassroots support for net neutrality and a court case will be decided in 2019, which is likely to restart the process at the FCC.

In 2018, we announced a campaign led by education reformers to Stop Corporate Surveillance in Schools, which provides information on mass data mining by big business in schools for profits and how that undermines learning.

We continue to organize and support campaigns against fossil fuel infrastructure and other forms of dirty energy. We promote a positive vision of transformation to an economy that is controlled by and benefits people at ItsOurEconomy. Learn more about our campaigns here. 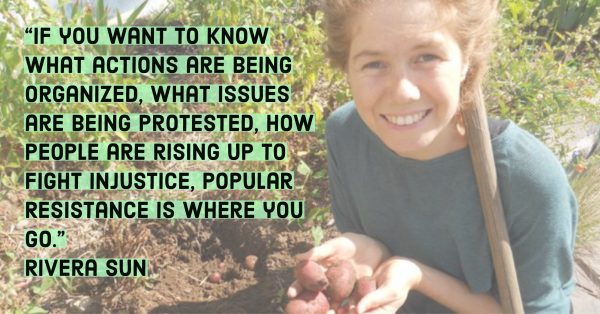 Popular Resistance is constantly evolving. We grew out of organizing around the Occupy movement. We are constantly evaluating the political environment and where we are as a movement to adjust our tactics. We see tremendous opportunities to build on that legacy and significantly grow the movement in these challenging times. We have more ideas for action in 2019 that we haven’t covered in this newsletter.

Popular Resistance was created to serve your need for information that isn’t being provided in the corporate media, education about movement strategy and resources to take action. We are all Popular Resistance and we all contribute in our own ways, sharing information, getting into the streets and financial support.

If you have the means, make a donation today. It will be tax-deductible through our fiscal sponsor, the Alliance for Global Justice. Build independent resistance for 2019 and beyond.

*Remember, when you donate $35 or more, you can pick one item from the Popular Resistance Store and we will send it to you. Just email us at info@popularresistance.org and indicate what you want. 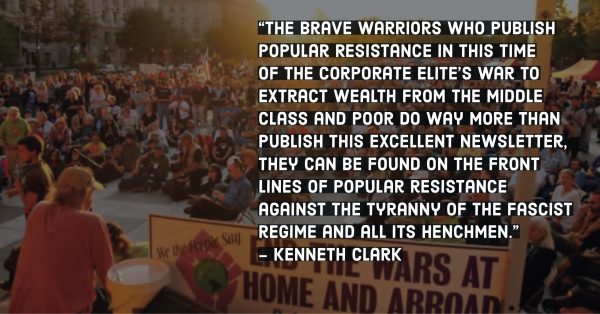