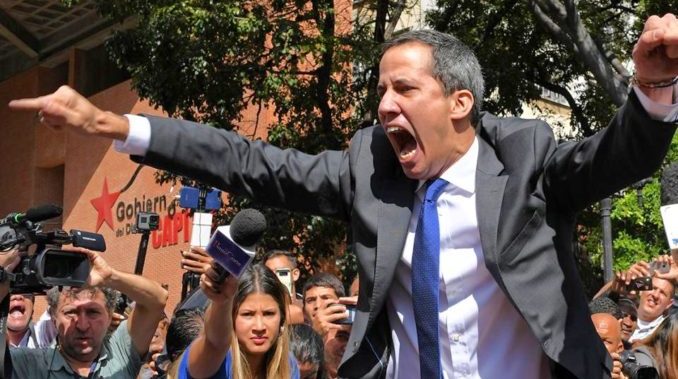 Above Photo: Guaidó attempts and fails to rally right-wing reaction in Venezuela.

The article below describes Juan Guaido as a “ridiculous” figure who has failed five times in attempted coups in Venezuela and now has been defeated in his attempt to continue as president of the conservative National Assembly.

The US coup with their puppet Guido has become a tragic comedy. US media reporting on what occurred in the National Assembly election has continued the false reporting we have come to expect from corporate media about events in Venezuela. Corporate media claimed that President Maduro has taken over the Assembly when in reality, the Assembly elected four new leaders, a president, two vice presidents and a secretary. All four of the people elected are from opposition parties that oppose Maduro’s government. The reality is not that Maduro has taken over, but that the opposition does not support Juan Guaido and is divided in how to compete with Maduro’s party.

Luis Parra, of the right-wing opposition party Primero Justicia, the three other elected leaders of the National Assembly and other members of the Assembly who led the effort against Guido have all been sanctioned by the US government. Primero Justicia is the opposition party of extremist opposition leaders, Julio Borges and Henrique Capriles. Parra was expelled from the party days before the vote. Also sanctioned were First Vice President Franklin Duarte of the conservative Christian party COPEI, Second President Jose Noriega of Guaidó’s own Voluntad Popular party, and Secretary Negal Morales the neoliberal Acción Democrática. Also named were senior opposition legislators Jose Brito, Conrado Perez, and Adolfo Superlano. Treasury Secretary Stephen Mnuchin said they would be sanctioned until they recognized “Juan Guaido as their legitimate leader.”

The Constitution requires that an election for the National Assembly be held in 2020. The date has not yet been determined for the election. Some in the opposition, seeing a likely electoral victory by Maduro’s party, may decide to boycott the election. A boycott strategy was used by some in the opposition for the last presidential election which was won by President Maduro. The boycott is used in order to undermine the legitimacy of an election that the opposition knows it will lose. The National Assembly election will be the first democratic test of the strength of the opposition and of President Maduro since the tragic comedy of the failed puppet coup. KZ

The self-appointed “interim president” of Venezuela, Juan Guaidó, received a humiliating setback in that country’s National Assembly vote on Jan. 5. He was deposed as leader of the parliamentary body.

Throughout 2019, Guaidó served as the designated puppet of U.S. imperialism in Venezuela. He made five attempts with a reactionary, pro-U.S. regime to overthrow and replace the Bolivarian government led by President Nicolás Maduro. Guaidó had no base among Venezuelans outside of his own assembly district and little credibility even among the opposition.

His main support came from the worst imperialist operatives allied with the Trump administration: Mike Pence, Mike Pompeo, John Bolton, Marco Rubio, Elliott Abrams, from Trump himself; from Luis Almagro — the Uruguayan U.S. agent heading the Organization of American States; the Iván Duque regime in Colombia; Jair Bolsonaro in Brazil; and from the European Union.

Guaidó’s complete lack of popular support helped defeat all five of his attempts to make a coup during 2019. He was also connected to the embezzlement of humanitarian aid and links to Colombian paramilitary outfits — “death squads.”

Opposition parties have dominated the National Assembly (AN) since the December 2015 vote. Apparently a majority of the representatives, even those opposing the Maduro government, were disgusted with Guaidó’s role.

Maduro recognized Parra as the new AN president, saying on Jan. 5: “The National Assembly has voted and there is a new leadership board. It was in the air that Guaidó was going to be removed by the very opposition.” Maduro  criticized Guaidó for “not showing up.”

Parra said he would “pursue a path toward reconciliation” with the government. (quotes from venezuelaanalysis.com, Jan. 5)

On Jan. 8, Guaidó declared the Jan. 5 vote irregular and established his own version of the national assembly, with himself as its leader.

While his obvious lack of popular support may make him a ridiculous figure, U.S. imperialism’s backing for Guaidó continues the threat against Venezuela’s revolution and its sovereignty. The progressive movement in the United States must still resist U.S. interference in Venezuela and demand an end to U.S. sanctions that have imposed suffering on millions of Venezuelans.