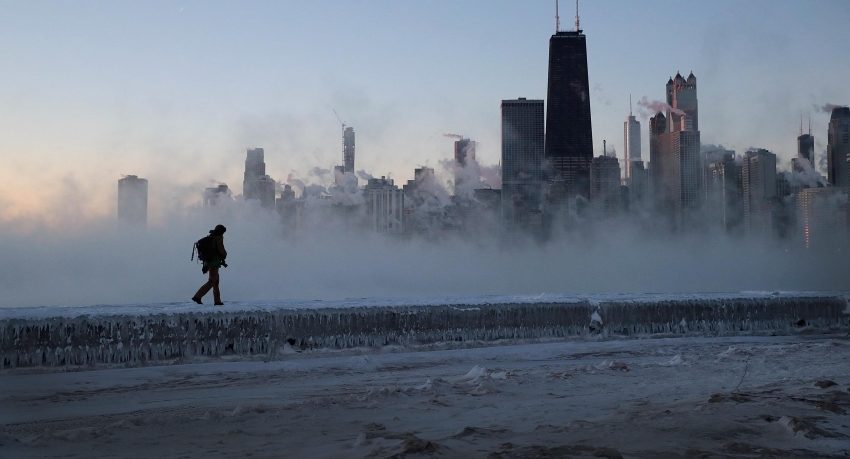 Incarcerated Workers Are Bearing The Brunt Of Extreme Weather

Above photo: A man walks along an ice-covered break-wall along Lake Michigan while temperatures were hovering around -20 degrees and wind chills nearing -50 degrees on January 31, 2019 in Chicago, Illinois. (Photo by Scott Olson/Getty Images)

On January 28, an image of Cook County Jail prisoners shoveling snow went viral after it was posted on the  La Villita community Facebook page and then shared by the Chicago Community Bond Fund. The city of Chicago was preparing for an arctic blast and the prisoners were seen working in cold temperatures wearing orange jumpsuits. Thousands of people shared the image and expressed concern about the well-being of the prisoners. This scenario is yet another example of how incarcerated workers—toiling for little or no pay—are on the frontlines of extreme weather. 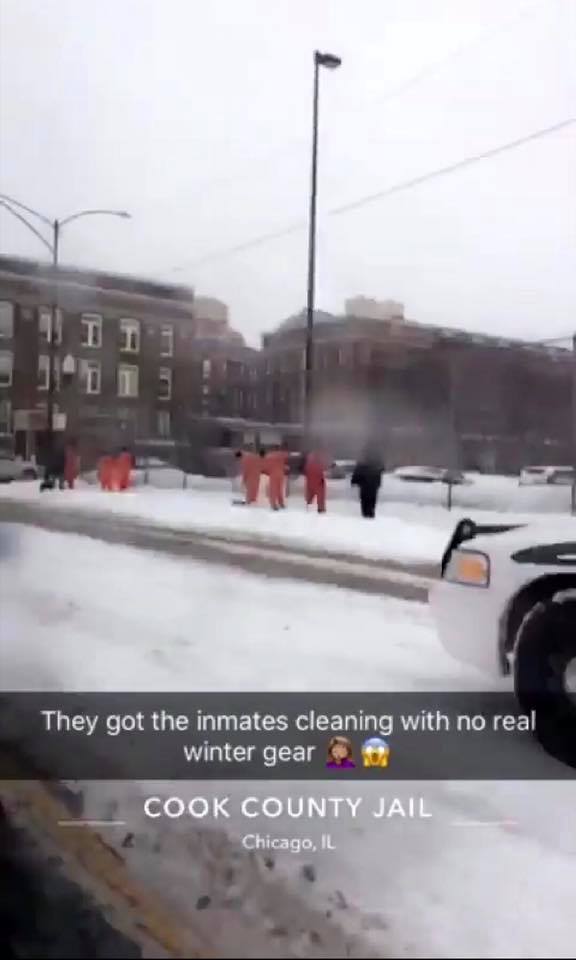 Predictably, the office of Cook County Sheriff Tom Dart sought to exonerate itself in the press. “The situation was entirely and intentionally misrepresented,” said Cara Smith, chief spokesperson for Dart’s office. Smith claimed the prisoners were actually wearing insulated jumpsuits, that there was a warming van nearby, and that prisoners were not allowed to work if the temperature dropped under 20 degrees. Numerous news outlets reported Smith’s quotes without digging into their veracity, even though she presented no evidence.

Smith admitted that prisoners were only paid $2 for the work assignment, in a jail where at roughly 2,700 people are incarcerated simply because they can’t afford to pay their bond. Smith sought to justify the nothing wage by claiming the prisoners were doing work as part of a vocational job training program called RENEW. Yet, as Sharlyn Grace, co-executive director of the Chicago Community Bond Fund, put it to The Chicago Tribune, “I don’t think that anyone is seriously suggesting that shoveling snow is a skilled form of labor that’s going to lead to job opportunities upon release.” Prisoners have little-to-no access to the press, and reporters often make no effort to contact them, so it’s no surprise that none have been quoted on the subject.

The latest example at Cook County Jail certainly isn’t the first time that prison labor has been used to respond to or prepare for extreme weather, nor is it the first time that such a controversy has made national headlines. In 2015, Think Progress reported that the Massachusetts Bay Transportation Authority had used volunteer prison labor to shovel snow in Boston when the windchill was negative 25 degrees. The prisoners were paid $3 to $4 a day for their efforts, while non-prisoners doing the same work were paid $30 an hour.

After deadly wildfires hit California this past fall, more than 2,000 prisoners were used to help fight them. While the prisoners fight fires through a vocational programoffered by the state, they’re incentivized by earning time off of their sentences and they’re only paid $2 a day and an additional $1 an hour if there is an active fire to fight. While the prisoners could use the work to reduce their sentence, once released, they often aren’t allowed work as firefighters due to their record of incarceration. In California, the job can legally be denied to almost anyone with a criminal record.

Global warming is making wildfires, like the ones in California, more extreme.  “You warm the planet, you’re going to get more frequent and intense heat waves. You warm the soils, you dry them out, you get worse drought,” Michael Mann, an atmospheric science professor, told PBS last August. “You bring all that together and those are all the ingredients for unprecedented wildfires.”

Additionally, many scientists are now also connecting intense cold waves to the warming of the Arctic, which means that prisoners working in the cold could also technically be on the frontlines of the climate crisis. Prisoners have very little protections, are at great risk of exploitation, and details about their conditions are often scarce.

Panagioti Tsolkas, the coordinator for the Campaign to Fight Toxic Prisons, tells In These Times that he also sees the intersection of climate change and mass incarceration in the wake of environmental disasters. “After hurricanes here in Florida, prisoners got called out to help with relief efforts,” he says.

While prisoners are being used to mitigate climate disasters, they’re among the most vulnerable to their impacts. Incarcerated people are often housed in prisons that experience extreme heat without air conditioning. A 2017 report from The Marshall Project found that four out of five people held in Texas prisons lack air conditioning. In 2014, state prisoners at Wallace Pack Unit in Grimes County sued their prison after a number of incarcerated people died as  a result of the extreme heat. Four years later, a settlement was reached, and the prison was required to provide air-conditioning.

In 2018, the Texas Inmate Families Association compiled reports from prisoners’ relatives and found that at least 30 Texas prisons had inadequate heating after freezing temperatures hit the state during the winter. Last year, the Campaign to Fight Toxic Prisons helped organize a prisoner strike in the state of Florida. The prisoners said one of their intentions was to “expose the environmental conditions we face, like extreme temperatures.”

Last summer, prisoners organized a nationwide strike across 17 prisons to highlight poor conditions and labor practices. Among their demands was an “immediate end to prison slavery. All persons imprisoned in any place of detention under United States jurisdiction must be paid the prevailing wage in their state or territory for their labor.”  The 13th Amendment abolished slavery but contains an exemption that allows involuntary servitude as part of a criminal punishment. Chicago’s minimum wage is set to increase to $13 an hour this summer, and the prisoners who shoveled snow this week lag far behind.