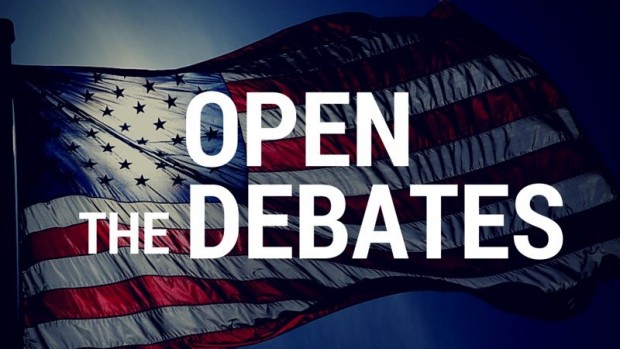 Include All Qualified Candidates In 2016 Presidential Debates

Above Photo: From change.org

Note: Popular Resistance will be starting a campaign to open the debates to all candidates who are on enough ballots to achieve 270 electoral college votes. That includes both the Libertarian and Green candidates as well as the establishment parties. You can sign up to join the campaign here. That page will also tell you additional steps you can take right now to push open, inclusive debates.

The Commission on Presidential Debates (CPD), the organization in charge of the presidential debates, has been keeping qualified candidates off the debate stage.

Run by the Republican and Democratic parties, the CPD has set up rules making it almost impossible for third party candidates to be included in the debates. Americans deserve the ability to hear from everyone who will be on their ballot. As a coalition of individuals and organizations across the political spectrum, we are calling for the CPD to reform their rules. Starting in 2016, candidates who qualify on enough state ballots to possibly win the presidency should be invited to participate in the presidential debates.

Currently, candidates must have 15% or higher in at least 5 national polls. Most national polls exclude third party candidates, making it impossible to achieve the required percentage of support. Even third party candidates getting taxpayer money for their campaigns and qualifying for Federal Election Committee matching funds are not being allowed to participate without the 15% threshold.

Presidential debates have been critical in deciding who goes to the White House. They are watched by millions of Americans and give the public a closer look at the candidates. The presidential debates should not be dictated by any party. Now is the time to shake things up and give Americans the debates we deserve.

Join us in calling on the CPD to allow all candidates who qualify on enough state ballots to possibly win the presidency to participate in the presidential debates. Please sign and share the petition now so we can get the debates we deserve in 2016.

Letter to
Commission on Presidential Debates

Include All Qualified Candidates in 2016 Presidential Debates.

Anything less is disgracefully anti-democratic and simply unacceptable.