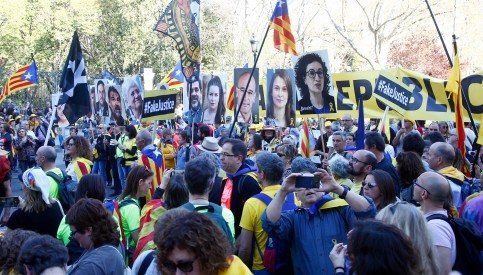 Above Photo: By Javier Batbancho

Organizers of the protest against the Catalan trial have celebrated a “historic” march in Madrid in a “context of political repression”. For the Catalan National Assembly (ANC) president Elisenda Paluzie this demonstration showed the unity of “all the peoples of Spain” for the right to self-determination. The vicepresident of Omnium Cultural, Marcel Mauri, deemed the protest as a “wall” against intolerance and hate.

Thousands of people rallied against the ongoing independence trial on Saturday through Paseo de Prado – the symbolic and geographical heart of the Spanish capital – under the banners “Self-determination is not a crime” and “Democracy is about deciding”.

“Although you don’t share the independence call, you respect that we have the right to decide it”, thanked Paluzie to demonstrators from across Spain.

The Catalan president Quim Torra asked Spain to look within and contemplate self-criticism and to consider the right to self-determination. “Spain, listen to this call for freedom”, said the poet Joan Maragall. The Speaker of the Parliament Roger Torrent alerted Spanish citizens that “after those who seek independence,” the attack against fundamental rights “could affect anyone”.

“Tomorrow it could be the feminists, trade unionists or ecologists”, he warned.

The Deputy Mayor of Barcelona, Gerardo Pisarello, also joined the march to show “gratitude” to all people outside Catalonia that support “dialogue, fundamental rights and democracy” to solve this political crisis. According to him, there is an increasing number of unionists who “understand that this is a question of basic rights”.

The far-left CUP leader Carles Riera believes that the rally has defended everyone who “suffer from repression in their fight for social, economic, civil and political rights.”

Spanish police says there were around 18.000 people at the demonstration, but organizers claim they were 120.000 instead

Thousands of people rallied in Madrid against independence trial on Saturday afternoon. More than 50 pro-independence groups and political parties called on people from across Spain to participate in a march for Catalonia’s “right to decide” in the Spanish capital.

While Spanish police said there were around 18.000 people at the demonstration, the organizers claimed they were about 120.000 instead, according to first estimates. The rally was called by independentist organizations and parties, mainly ANC, Òmnium Cultural, Junts per Catalunya, Esquerra Repúblicana and CUP. It was also supported by several entities across Spain.

More than 500 buses have traveled from Catalonia and across Spain to bring protesters to Madrid for the mass demonstration.

Starting at 6pm, the protest passed through Paseo de Prado – the symbolic and geographical heart of the Spanish capital – under the banners “Self-determination is not a crime” and “Democracy is about deciding”.

A few away kilometers from El Prado, 12 Catalan pro-independence leaders have been on trial for five weeks at the Spanish Supreme Court, facing charges of rebellion, sedition, and misuse of public funds, among others, for their role in the October 2017 referendum, which Spain deemed as illegal.

The Catalan associations behind this weekend’s march – led by Catalan National Assembly and Òmnium Cultural, pro-independence movements whose leaders and former leaders are among those in the dock– have long argued that the trial against the 12 Catalan pro-independence leaders cannot be justified and that the Catalan government should have the legal freedom to choose its own sovereign future.