On the 8-9th of January, 150 million workers went on strike in India. The strike was organised by ten different trade unions, covering transport, banks, financial services, government company, power, steel, car and other factory workers. It follows the protests by farm workers, who are joining in the action. Jamie Woodcock was in Bangalore and attended the demonstration on the first day of the strike. 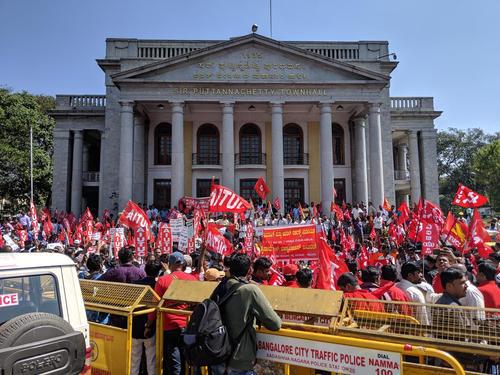 In Bangalore the strike was strong, shutting down transportation across the city. On the 8th of January, the unions called for a demonstration outside the town hall. There was the visible presence of transport workers (mainly bus drivers), factory workers (particularly aerospace), and bank workers, who joined a lively picket from across the road. While the weather reached around 30 celsius, the demo grew more and more packed. Police officers in tan uniforms, equipped with helmets and large batons, kept their distance at the edge of the demo.

Most of the flags on the demonstration were red, many with hammers and sickles. In Bangalore, the most prominent were the All India Trade Union Congress (AITUC) and All India United Trade Union Centre (AIUTUC). The AITUC is the oldest union federation in India and associated with the Communist Party of India (CPI), with a registered membership of almost 2.7 million. The AIUTUC is the trade union wing of the Socialist Unity Centre of India (Communist), with a claimed membership of over 2 million. In addition to this, there were a range of other communist affiliated unions, including AICCTU, TUCC, CITU, and so on. To an outside observer, the differences between their different red flags with hammers and sickles could be a little hard to discern. What was clear was that this strike was mobilising large numbers of workers.

I was introduced to an organiser at the demonstration who explained that in Bangalore the strike was strongest among public transport workers, industrial workers, bank employees, insurance employees, anganwadi (child care), and ASHA (accredited social health activist) workers. He argued that the Modi government was pushing anti-worker and anti-farmer measures, in particular privatisation, demonetisation, and other recent changes which were destroying jobs. The strike was “political” as an anti-government action, but also had a series of demands. The organiser sent the list over WhatsApp: 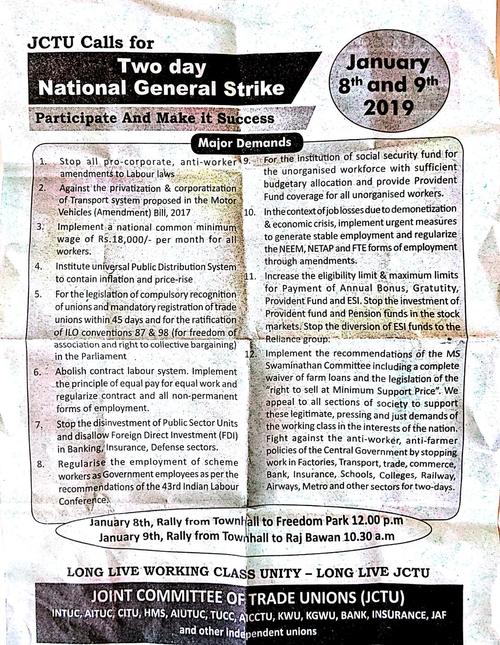 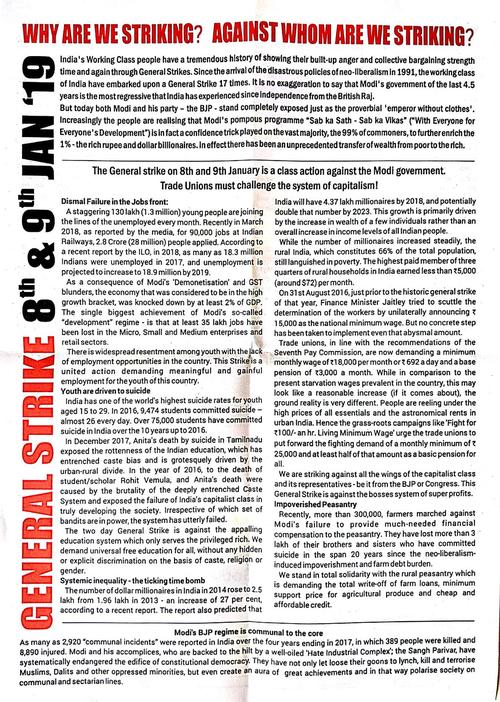 As the demonstration set off across the city towards freedom park, a large section of the Indian National Trade Union Congress (INTUC) joined. This is affiliated to the Indian National Congress party – previously Ghandi’s party that is currently in opposition. Their flags stood out, given that they featured neither red or communist iconography. However, given the anti-Modi mood on the demonstration, their members looked keen to participate. The demo itself was led by an auto rickshaw (a common sight in Bangalore), converted with loudspeakers to lead the chanting. The only part I recognised was one that the crowd replied “Zindabad!” (or “long live!”), which might have been the second part of “Inquilab Zindabad!” (or “long live the revolution!”). This was followed by a open top truck with even more speakers, draped with flags from each of the unions.

I marched with my union, the Independent Workers union of Great Britain (IWGB), flag which meant I was approached by lots of workers, wanting to know which union it was. Many of the workers were keen to talk about struggles in India and the UK – as well as some who just wanted to take selfies. The public sector workers I spoke to wanted to know how privatisation was being carried out in the UK – as well as whether there had been successful campaigns against it. There were a small number of tech workers who had come out in support of the strike. They were keen to make contact with tech workers in other countries as Bangalore has a large tech and outsourcing sector (with a purpose-built “electronic city” in the southeast), and there have been limited attempts to organise so far. 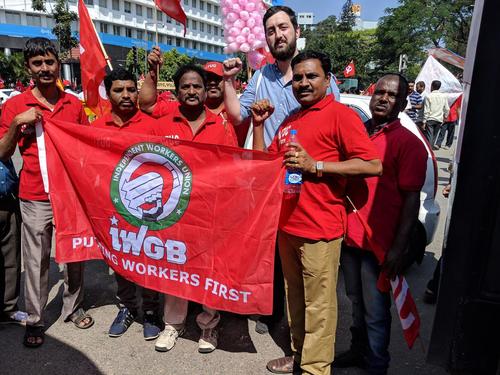 I spoke with activists from the CPI (ML) Liberation – a Maoist, mass movement-orientated faction – that had a prominent presence on the demonstration. After moving away from guerilla activities, they have been involved in organising groups of previously unorganised workers like street vendors, as well as supporting landless farmers struggles. One of their organisers had been out in the regions around Bangalore before coming to the strike, reporting that it had been successful so far. One of the victories saw workers successfully shutting down a sanitation plant by holding a strong picket.

Once the demo reached freedom park, its scale and composition became much clearer. The majority of the workers were aligned with the “red” unions, and political parties were playing an important role. The crowd of workers was diverse, with a large number of women, as well as significant numbers of visible Muslims. As the demonstration stopped, the crowd broke into its different sections to watch the speeches from the back of the open top truck. Chai sellers moved through the crowd and smaller impromptu debates started happening away from the speakers. Just around the corner the riot police drank chai too, some under the shadow of another converted truck – this one equipped with the large water cannon at the ready.

The strikes represent a serious challenge to the Modi government, particularly as it brings together the large trade unions, some of the new strikes by workers like the ASHAs (with their links to many rural communities), and the farmers’ struggles. Although it can be very challenging to comprehend the political dynamics as an outsider in India, these different groups coming together is a moment of class recomposition filled with potential. 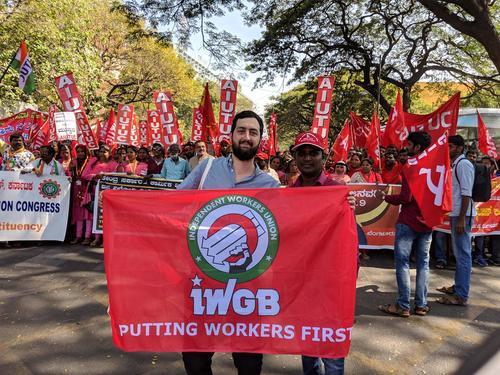 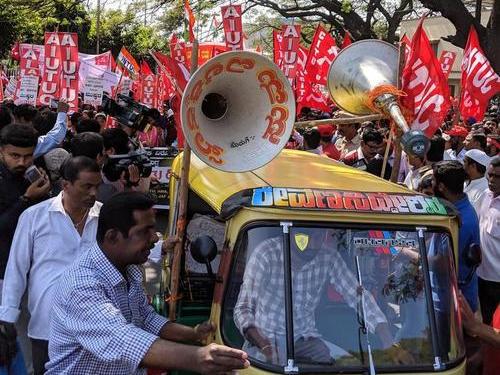 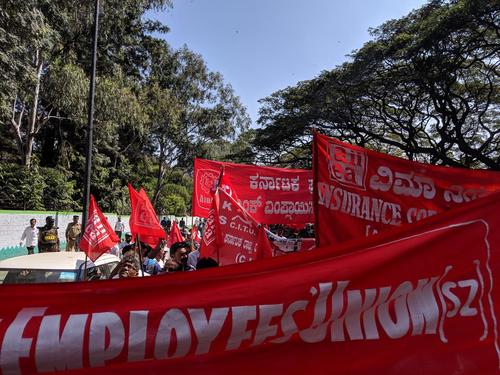