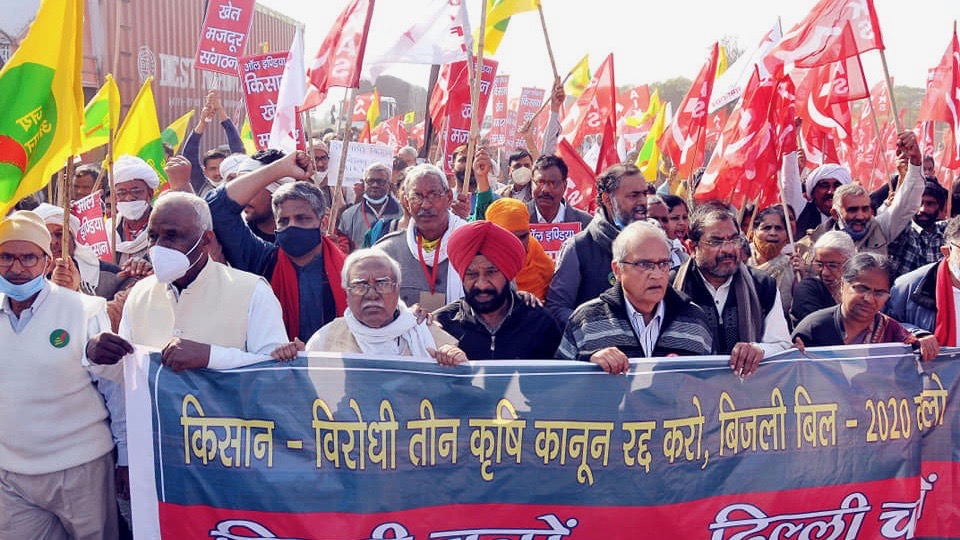 After A Year Of Struggle By Farmers.

Movements across India celebrated the struggle by the farmers during which they faced great repression and vilification. Around 750 people are believed to have died during the agitation which saw thousands camp on the borders of Delhi.

After fighting for almost a year, farmers in India finally won a victory against the three farms laws enacted by the right-wing Bharatiya Janata Party (BJP) government last year. Prime minister Narendra Modi announced on Friday, November 19, that the three laws would be repealed and all legal processes related to the matter will be completed during the upcoming session of parliament.

The news of the announcement led to celebrations all across the country. People hailed the victory of the farmers’ movement and took to the streets and social media to express their joy, while recalling the sacrifices made by the farmers in their year-long agitation. Several called it a victory against the arrogance of power.

The Samyukt Kisan Morcha (SKM), which is spearheading the farmers’ movement, issued a brief statement welcoming the prime minister’s announcement. However, it also reiterated that some of its crucial demands are yet to be met and the fate of the ongoing agitation will only be decided after a detailed review later.

SKM also reminds the Prime Minister that the agitation of farmers is not just for the repeal of the three black laws, but also for a statutory guarantee of remunerative prices for all agricultural produce and for all farmers. This important demand of farmers is still pending.

The full statement of the SKM can be found here.

Welcoming the announcement, Sitaram Yechury, general secretary of the Communist Party of India (Marxist), saluted the farmers and their brave struggle against the three farm laws. He called the over 750 farmers who had died during the agitation “our martyrs.”

Yechury also demanded that the prime minister apologize to the farmers for causing “hardships and troubles by his dictatorial step of farm law to benefit his crony business partners,” and fulfill the other demands of the farmers.

The All India Agricultural Workers Union (AIAWU) also hailed the announcement of the withdrawal of the three laws calling it a victory for the peasants and the patriotic people of India.

Rahul Gandhi, leader of the Congress, the main opposition party, congratulated the farmers in a tweet for defeating the government’s arrogance with their struggle for truth.

Mark my words, the Govt will have to take back the anti-farm laws. pic.twitter.com/zLVUijF8xN

Welcoming the announcement, the Communist Party of India (Marxist-Leninist) Liberation tweeted that farmers will not leave the protest sites until all the formalities of the withdrawal are complete and other demands of the farmers are fulfilled.

“It is a big victory. The movement will continue till anti-farmer three laws are officially repealed in the upcoming parliament session, MSP guarantee law is passed & fabricated cases filed against leaders & members of various farmers’ orgs are withdrawn.”https://t.co/ulp9caLjN5

Reacting to the farmers’ victory, author and columnist Vijay Prashad wrote on Facebook, “first time in seven years the Man with the Saffron Beard had to admit defeat. Modi repealed the farm laws, not because he saw the light of their hideousness but because the farmers & the working-class would not budge.

Reacting to the prime minister’s statement, Hannan Mollah, secretary of the All India Kisan Sabha (AIKS), called it a partial victory as some of the crucial demands of the farmers have not been met yet.

After failing for months to persuade the government to withdraw the three farm laws, the SKM, a platform of more than 500 farmers’ unions from across India including the left-oriented AIKS, began its indefinite sit-in at all major border crossings to national capital Delhi on November 26 last year. The SKM argued that the three farm laws enacted promoted corporate interests at the cost of the farmers, and would eventually lead to the destruction of the farm sector in the country by endangering the livelihoods of millions and enabling the corporate takeover of agriculture.

The SKM had also demanded the enactment of a law on minimum support prices (MSP) and the withdrawal of the electricity amendment bill. MSP is a set of basic prices declared by the government in India based on which it procures certain farm products. Though it is expected that the market price of farm produce will not fall below the MSP, it is hardly the case and most of the time, farmers are forced to sell their produce at prices less than the MSP or less than the basic cost of production.

The electricity amendment bill provides for private players in electricity distribution, which farmers think will lead to a rise in the price of electricity and the overall cost of production due to the withdrawal of government subsidies.

Following the protests at the Delhi border, India’s Supreme Court had suspended the laws for a year and formed a three-member committee to examine them. The farmers rejected the Supreme Court’s intervention and called the committee biased in favor of the government and the laws. Following this rejection by the farmers, some members of the court-appointed committee withdrew from it. However, proving the farmer’s apprehensions correct, on Friday, one of the members of the committee, Anil Ghanwat, called the prime minister’s announcement “the most regressive step” and accused him of choosing “politics over farmers’ betterment,” Press Trust of India reported.

The SKM took out numerous protest actions through their year-long movement, including the march of tractors on the occasion of Republic Day in January. The farmers also faced numerous oppressive measures from the state, the arrest of several leaders on false charges, and a vilification campaign targeting the agitating farmers as terrorists and accusing them of destabilizing the country.

The BJP has maintained that the three farm laws were in the interest of the farmers and will benefit agriculture in India. In October, the son of one of the ministers in the BJP government was accused of ramming his car into five farmers protesting the farm laws in Uttar Pradesh’s Lakhimpur Kheri district. The SKM has asked for the sacking of the minister, Ajay Kumar Mishra, from the union government and punishment for all the culprits of the heinous crime.