The 154-year-old Eli Jackson Cemetery sits about a mile from the Rio Grande, south of the Hidalgo County town of San Juan. Encompassing about a quarter-acre, it hosts the remains of some 150 South Texans. Just a few feet north rises a sloped earthen river levee, which the Trump administration soon plans to transform into a 30-foot concrete and steel border wall. South of the wall, the feds plan to clear a 150-foot “enforcement zone,” raising fears that bodies will be exhumed, and most of the cemetery razed. But the dead have new company: a small group of Native American activists and allies who say they’ll stand in front of the bulldozers and refuse to move.

On Wednesday, about 15 people milled about a makeshift campsite at the cemetery where they’d recently erected 10 tents. Over the last three weeks, they’d cleared out Johnson grass and other weeds that had overgrown many of the graves. As I approached the site, Juan Mancias, a long-time environmental and Native American rights activist, came out to welcome me to what he called “Yalui Village.” Mancias, 64, is the tribal chair of the Carrizo/Comecrudo, a group Indigenous to South Texas and Northern Mexico that claims about 1,500 members but isn’t recognized by the federal government. “Yalui” means “butterfly” in the Carrizo/Comecrudo language. 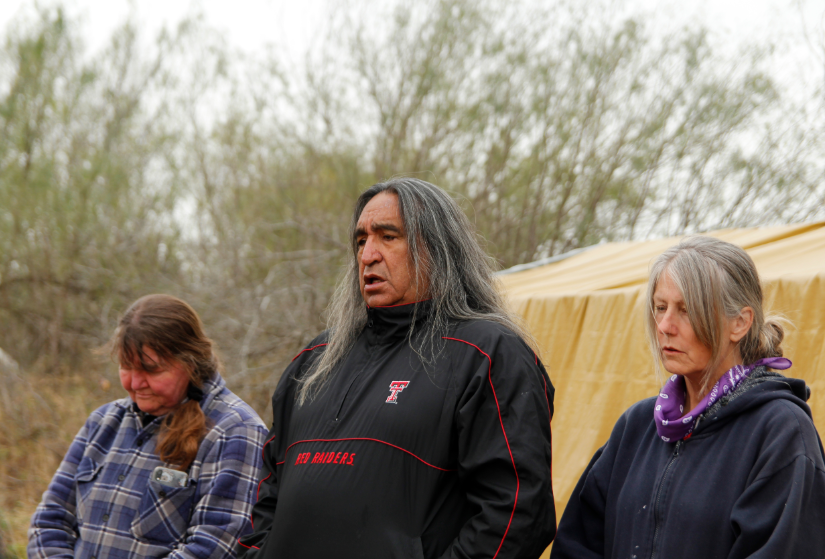 Juan Mancias during a prayer song at the Eli Jackson Cemetery.  GUS BOVA

Last month, Mancias met with descendants of those buried in the cemetery and hatched the encampment idea. Now, he’s leading a coalition of Carrizo-Comecrudo members, Valley residents and allies hailing from South Dakota, Colorado and Missouri in a last-minute bid to stop the border wall. Mancias, who grew up in North Texas but whose family is from the Valley, believes that unmarked graves of Native Americans would be unearthed during wall construction. He’s also a distant descendant of some buried in the cemetery. Around seven people are currently camping overnight at the site, while more come during the day. The group has pledged to engage in civil disobedience if necessary. “We’re here, ready to protect the environment and our rights as the original people of this land,” Mancias said. “What are they gonna do? Run us over?”

Some of the activists are veterans of the Standing Rock protests against the Dakota Access Pipeline. One Lakota/Dakota activist, DuWayne Redwater, came from South Dakota to join the Texas encampment. On Wednesday, Redwater led the group twice in prayer songs. Asked why he traveled so far, he rebuffed the question. “Being from where I’m from, it’s kind of our job,” he said, “to be landlords and caretakers of this land.” Others are locals, like Patricia Rubio, who works as a plant nursery technician at the nearby National Butterfly Center, which is also threatened by the wall. Rubio said she plans to grow plants near the cemetery to attract bees and butterflies. The group also plans to set up camps on other properties in the area, depending on how wall construction advances.

DuWayne Redwater sings at the Jackson Ranch Church Cemetery, another graveyard about 500 feet west of the Eli Jackson Cemetery. This cemetery sits further from the levee, so it is likely to survive potential wall construction.

The Eli Jackson Cemetery has been a designated state historical site since 2005. It was originally a family cemetery for the Jacksons, whose patriarch fled Alabama with his African-American wife in the 1850s and purchased a swath of ranchland, including the plot the graveyard sits on, according to Jackson descendants and documents submitted to the Texas Historical Commission. More families used the cemetery over time, including other prominent Anglos who left the Deep South, along with local Hispanic families of less gilded backgrounds. The area was even a waystation for a time on the Underground Railroad, and some escaped slaves settled there permanently, eventually burying their dead in the cemetery. Not all graves are marked.

“We’re here, ready to protect the environment and our rights as the original people of this land.”

Last summer, Customs and Border Protection (CBP) released a map indicating that the agency plans to build its wall through the cemetery, stopping just shy of the nearby Santa Ana Wildlife Refuge, using funds that Congress appropriated in March. CBP is aware of the graveyard’s existence: In early October, the Texas Historical Commission sent the federal agency a letter flagging the historic site. But a few weeks later, in an online question-and-answer session, a CBP official responded to a query about the graveyard as though the agency were unfamiliar: “As these historical sites are identified, CBP will be consulting with landowners and other stakeholders to identify strategies that avoid or minimize impacts to these sites to the greatest extent practicable.”

The feds have not yet waived environmental or historic preservation laws for the stretch that includes the cemetery, though that could happen at any moment. No construction contract has been awarded yet, but federal court records show the government hopes to do so in mid-March. Records also show that the government is currently pursuing eminent domain against a property about 400 yards east of the graveyard, though it hasn’t started the process for the cemetery itself. A decade ago, in neighboring Cameron County, at least one small historic ranching cemetery was bulldozed during wall construction, as reported by The Intercept. In an email Thursday, a CBP spokesperson said he didn’t know when the agency would start construction at the Eli Jackson Cemetery, and didn’t answer further questions. 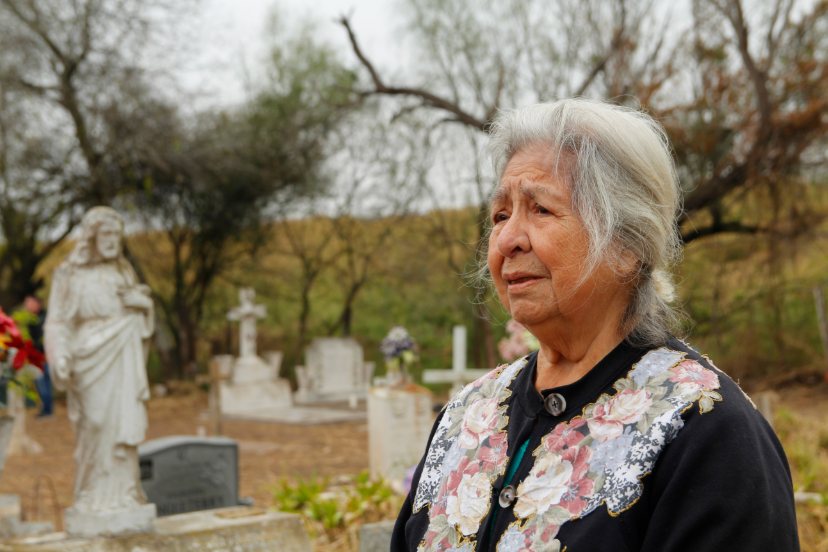 As I was about to leave on Wednesday, an activist pulled me aside to meet one more person. Olda Canales, 81, had just walked up to the encampment with an offering of homemade banana bread. Canales grew up across the gravel road from the cemetery, on a property where two of her brothers still keep some livestock. Now living in a nearby colonia called Las Milpas, Canales knows the Eli Jackson Cemetery as well as anyone. As we threaded among the tombstones, she pointed to the graves of eight people she knew in her lifetime, including her great-grandmother. Canales is happy about the encampment. “Because the ancestors are here,” she said, “I’m grateful someone is taking care of it.”

I asked her about Trump and his wall. “He doesn’t live our life here,” she said, her voice wavering. “So to him, it’s easier.” Then Canales began telling me about her great-grandma, who lay at rest just a few feet away.