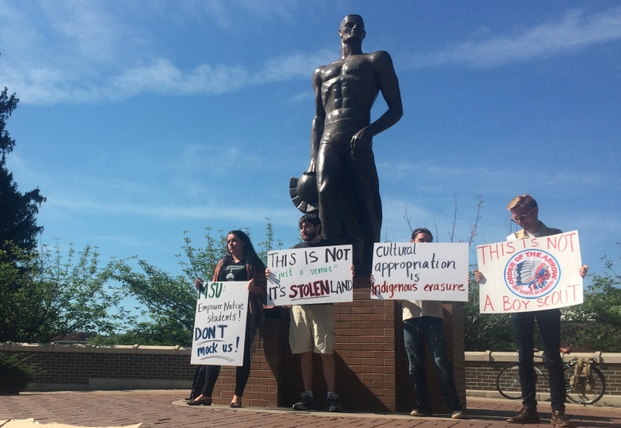 Protests inspired by a letter-to-the-editor blasting the Scouts’ honor society, Order of the Arrow. Protesters criticized the organization’s appropriation of Native American symbols.

Members of the Indigenous Graduate Student Collective protest cultural appropriation at Spartan Statue on August 7, during the 2015 NOAC. Matt Argillander/ The State News

If you’ve been on MSU’s campus this week, you have most likely noticed the presence of the Boy Scouts of America and the Order of the Arrow for their centennial exhibition.

After Phillip Rice, a music composition graduate student and member of the Order of the Arrow, sent an opinion letter to The State News expressing displeasure with the event being held at MSU, Shelbi Meissner, a member of the Indigenous Graduate Student Collective and descendent of the Luiseno and Cupeño in Southern-California, teamed up with Rice at Spartan Statue to protest the group’s use of Native American culture and imagery.

One of the main reasons Meissner, a philosophy graduate student, cited for protesting was the presence of teepees and individuals wearing headdresses around campus.

“They have a racist caricature of a native man in a headdress that they claim is no longer one of their insignias, but it has been flying on a hot air balloon around campus as well as on a lot of the banners that have come in here,” Meissner said. “As a Native American woman I find it highly offensive, and as a member of this community I feel really offended that MSU would host a group like this without any regard for how it would make a lot of students and faculty feel.”

“We have to be careful,” Conrad said. “We are utilizing the images and culture of other societies and we need to make sure that we give them the respect that they deserve. They have a right to come out here and remind us to be respectful.

Meissner said the university doesn’t properly acknowledge the people that were native to the land MSU owns.

“The land that Michigan State is on was stolen land in the Saginaw Treaty of 1819,” Meissner said. “Not only does the university nowhere in their history section acknowledge this, they actually tend to erase it.”

She went on to say that the university claims to be “a pioneer,” which she considered “extremely destructive rhetoric” that would make it sound like nothing was here before. She said that the farm lands here were Anishinaabe farm lands that would have been used to provide livelihood for their families.

Meissner stated that the Indigenous Graduate Student Collective didn’t get any warning that there would be Boy Scouts here, so there was not a lot of time to organize the protest, but she said they had to have a presence.

“We wanted to come today for sure because there was a big evacuation drill and there would be high visibility (and) we get to see a lot of the young people, which I think is important,” Meissner said. “For a lot of young people this is their first time seeing a protest or knowing that there is some kind of public discourse going on about cultural appropriation.”