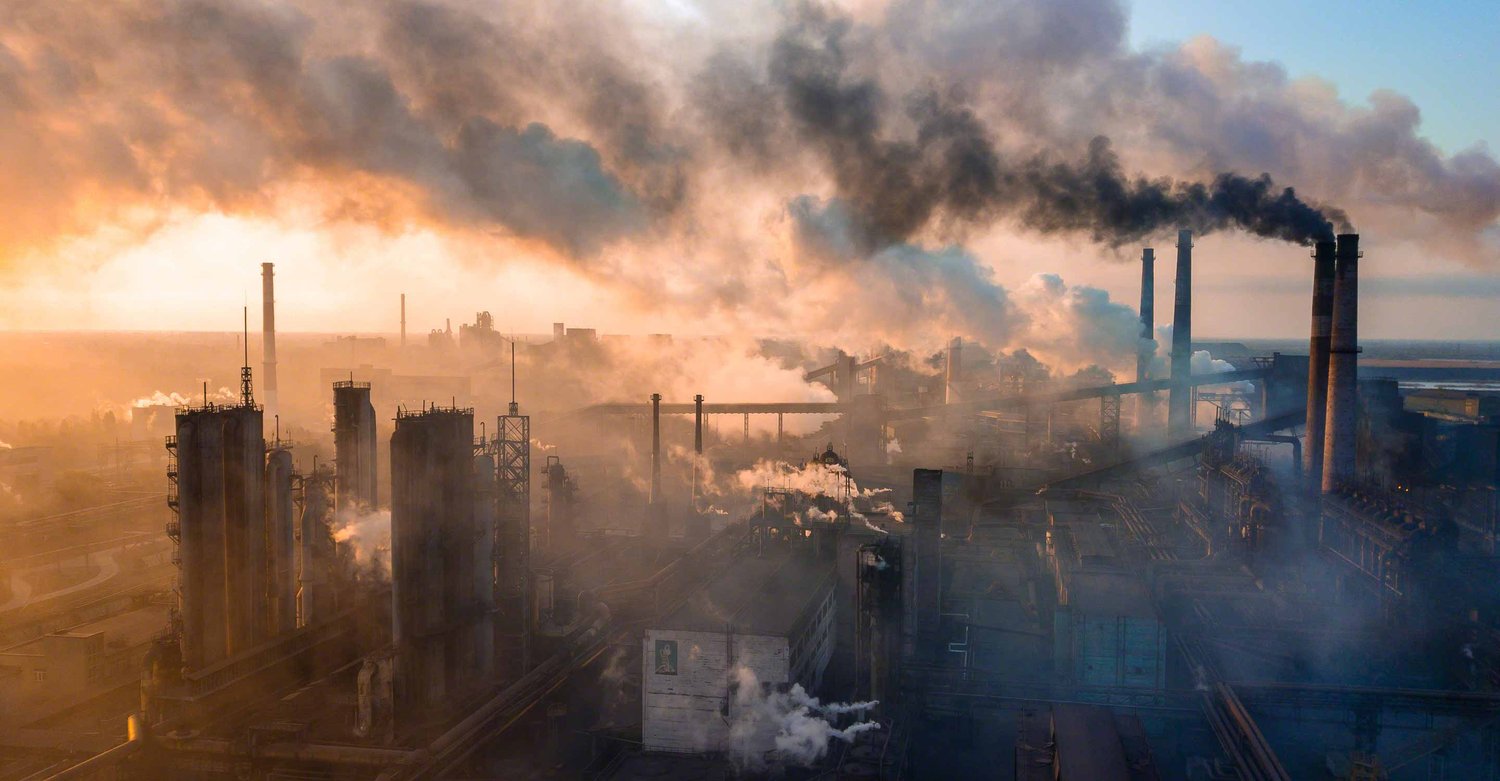 The U.S. Supreme Court issued a rule that limits the EPA’s ability to regulate greenhouse gasses from the power sector using a specific provision of the Clean Air Act.

Earlier this year, the Intergovernmental Panel on Climate Change stated that existing and planned fossil fuel projects are more than the climate can handle, confirming that without sharp reductions in greenhouse gas emissions and fossil fuel use, we are, as UN Secretary General Antonio Guterres says, “on a fast track to climate disaster.” The report also warns investors of stranded fossil fuel assets that will amount to $4 trillion in a world where warming is limited to 2°C, and even more in a world where it is limited to 1.5°C.

In the five years after the Paris Agreement was adopted, six US Banks ― JPMorgan Chase, Citigroup, Wells Fargo, Bank of America, Morgan Stanley, and Goldman Sachs ― provided nearly $500 billion in lending and underwriting to the 100 corporations most aggressively expanding fossil fuel operations, including Exxon-Mobil, Chevron, and Gazprom. Chase, Citigroup, Wells Fargo, and Bank of America are the world’s four largest providers of lending and underwriting to those same 100 companies. US-based insurance giants AIG, Travelers, Liberty Mutual, and Chubb are among the top ten insurance providers to the oil and gas industry, globally.

Members of the Stop the Money Pipeline coalition released the following statements:

“This SCOTUS has taken a battering ram to the right to privacy, tribal sovereignty, separation of church and state — the list goes on,” said Tara Houska, tribal attorney and founder of Giniw Collective. “Now the EPA suffers a massive hit as wildfires, droughts, and extreme weather grow in scale, as climate change disrupts food chains, devastates communities and ecosystems, and claims lives across the U.S. and globe. I wonder how much more the people will tolerate from this tiny group of individuals and a Congress with more excuses than actions.”

“The Supreme Court’s latest decisions underwrites continued settler violence perpetrated against Indigenous peoples, our lands, our bodies, our nations, and our futures. By circumventing well-settled precedent and statutory law, the conservative Court is reaching far beyond its constitutional authority, ‘legislating from the bench’ and is being used by the Right to push a full assault on the working class, BIPOC communities and tribal nations. However, these decisions do not prevent President Biden from taking executive action to stop the expansion of fossil fuels and declaring a climate emergency. We will continue to protect Mother Earth, defend our rights and confront interests who seek to destroy our futures.” – Dallas Goldtooth, National Organizer, Indigenous Environmental Network

“The right wing agenda to control the Supreme Court was set in motion over 40-years ago. Democrats failed to take serious the singular goal to control the courts in effort to overturn decades of progress. Now we are bearing witness to fulfillment of right wing agenda, overturn Roe v. Wade, the separation of church and state, weaken tribal sovereignty and now environmental protections. This should be a wake up call,” said Matt Remle, co-founder of Mazaska Talks

“While millions of us are still mourning the devastating overturn of Roe v. Wade last week, SCOTUS wasted no time in issuing another disastrous ruling in favor of Big Oil and right-wing extremist politicians. SCOTUS’s ruling endangers the lives of millions of people, especially Black, Brown, and Indigenous communities where polluting corporations have concentrated toxic and extractive industries. This decision is dangerous, anti-democratic, and will further exacerbate environmental racism, climate chaos and other crises Black, brown, and Indigenous communities are already facing,” said Erika Thi Patterson, Campaign Director for climate and environmental justice at the Action Center on Race & the Economy.

“It’s nothing short of a national crisis to see the highest court of the land become a tool for climate change deniers, polluting profiteers, misogynists, shameless gerrymandering, voter suppression, and religious extremists intent on imposing their beliefs upon an entire nation while chipping away at the division between church and state,” said Ginger Cassady, Executive Director of Rainforest Action Network. “At this point, for those in positions of high power to deny the urgency and the stakes of the climate crisis is to condemn everyone alive today and generations to come to live in a sick and impoverished world.”

“With this decision, the Supreme Court’s extremist majority has once again undermined rather than upheld rights, this time dealing a blow to the government’s ability to protect public health and the environment. Tying the hands of the EPA to curb planet-warming pollution from fossil fuel power plants will only exacerbate climate and racial injustice, particularly for communities on the frontlines of the fossil economy and the climate chaos it’s causing,” said Nikki Reisch, Director of the Climate & Energy Program at the Center for International Environmental Law. “In siding with the fossil fuel industry that spearheaded this case, the Court’s majority confirms just how dangerous a captured judiciary is for human rights and the environment. We need to curtail the fossil fuel industry’s power over climate policy and influence on court decisions, not the government’s power to end fossil fuel-driven climate destruction. The decision only underscores the obligation of the administration to use its available authorities to accelerate the transition to a fossil-free future. Lives depend on it — here and around the world.”

“John Roberts is politely doing a modest version of what Donald Trump sought to do on January 6th: Wield current power to seize additional power unlawfully. Conservative jurists pretend to be limited by the text of statutes, but this decision makes clear that their approach to statutory interpretation is no more than a series of massive power grabs on behalf of their fellow corrupt plutocrats. This Supreme Court’s institutional legitimacy is at zero and they have no one to blame but themselves,” said Jeff Hauser of Revolving Door Project.

“Because of the efforts of my state’s Attorney General, Patrick Morrisey, and senior U.S. Senator, Sen. Joe Manchin III, West Virginia is now a harbinger of doom for the entire planet. The West Virginia v. EPA decision strips the federal government’s executive branch of crucial authority for regulating greenhouse gasses and other pollutants, while the total inaction of Congress, caused by Manchin’s roadblocks, means our federal government is completely failing to act on the global climate crisis. Planned obsolescence and a rush toward extinction is apparently the West Virginia way,” said Eric Engle, Board Chairman, Mid-Ohio Valley Climate Action.

“Today’s ruling by the Supreme Court in West Virginia vs the Environmental Protection Agency is a huge step backwards in our collective ability to fight climate change. By sharply curtailing the EPA’s authority to regulate greenhouse gas emissions that cause climate change, the ruling comes precisely when we need work much faster to accelerate efforts at all levels, not just federal, to phase out fossil fuels to achieve the 50 percent reduction in emissions scientists say are needed by 2030,” said Stand.earth Executive Director Todd Paglia. “Despite this setback, we at Stand.earth know that a world where people and the environment are treated with respect is still possible. As bad as this decision is, what would be worse is for people to give up the fight. The best antidote to despair is action, and the climate and environmental justice movements have never been more powerful. Transformative change is within our reach and we must push onwards to a safer climate for everyone, together.”

“The Supreme Court’s latest devastating decision exposes the chokehold that Big Oil has, not only on our judiciary but on our political, economic, and cultural systems. Six unelected despots have just sold out the lives of millions—especially Black, Brown, Indigenous, and low-income frontline communities who are bearing the brunt of fossil fuel pollution—in favor of death knell profits for oil, gas, and coal corporations. How many more must die before we as a nation decide to try and mitigate this mass extinction event?” said CJ Koepp, Communications Coordinator at Fossil Free California.

“This illegitimate Supreme Court decision was dead wrong, but it doesn’t constrain President Biden’s toolbox to address the climate crisis. As Congress flails, executive action to limit fossil fuels is more crucial than ever. Biden must reject the fossil fuel industry’s cynical push for expanded extraction and petro-colonialism, aggressively wield his powers to move us away from oil and gas, and continue to rein in Wall Street’s deadly funding of climate chaos. In the battle between people and big polluters, the Supreme Court has sided with Big Oil and Gas. Biden must stand with the people and enact a strong climate agenda to protect communities,” said Collin Rees, United States Program Director at Oil Change International.

“350 Wisconsin is dismayed and disappointed in the Supreme Court’s decision to hamstring the Clean Air Act – a key piece of legislation for protecting our environment, our health, and our future. A summer of unprecedented heat is already impacting Wisconsinites, and such extreme weather will only worsen if the federal government is limited in its ability to restrict emissions from transportation and fossil fuel-fired power plants – the top two sources of carbon emissions in the US. This ruling will also remove the executive branch’s ability to consider the climate crisis when evaluating oil pipelines and similar infrastructure projects – thus exposing our state’s waters, ecosystems, and people to potentially catastrophic spills from oil pipelines like Enbridge’s Line 5 in northern Wisconsin. Our most vulnerable populations will suffer the most from the ongoing climate crisis, with low-income households, BIPOC communities, and young people impacted most. This is not just a matter of climate – this is a matter of justice. With today’s decision and last week’s Dobbs v. Jackson Women’s Health Organization decision, the Supreme Court is severely letting down the American people,” said John Greenler, Executive Director of 350 Wisconsin.

“The actions of the Supreme Court this week are nothing short of malicious. This morning’s ruling on West Virginia v. EPA not only slows the life-or-death flight to curb carbon emissions; it empowers fossil fuel giants to continue expanding plastic production, which they hope will be responsible for half of growth in oil demand by 2050” said Madeleine MacGillivray, Climate and Plastics Campaign Coordinator, Seeding Sovereignty.