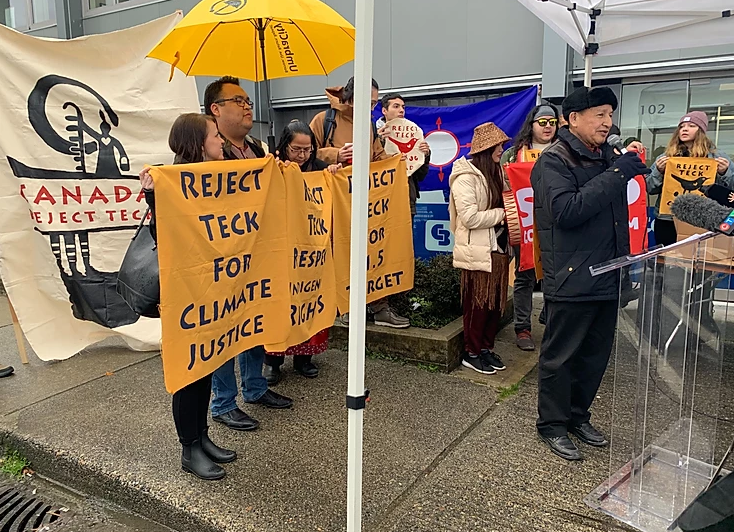 January 20, 2020, Vancouver, BC, Coast Salish Territories – Indigenous Climate Action (ICA) gathered Indigenous leaders and land defenders outside Minister Wilkinson’s office in North Vancouver to raise alarm about the impacts of the Teck Frontier Mine proposal – the largest proposed open-pit tar sands mine. Members from the Union of BC Indian Chiefs (UBCIC), Tiny House Warriors, Smith’s Landing First Nation, and Wet’suwet’en Solidarity Network came together to assert inherent Indigenous rights and put the Federal Minister of Environment and Climate Change, Jonathan Wilkinson, on watch for his decision on the project proposal and Joint Review Panel’s (JRP) recommendations. The leaders tied together climate change and Indigenous rights impacts created from tar sands extraction, pipelines, refinery and energy infrastructure, citing this project would set the country back on its commitments to the climate and Indigenous Peoples.

The Teck Resources Frontier Mine would be over 29,000 hectares in size and create 6Mt of GHG emission annually, while also impacting local wildlife, waterways and Indigneous communities. Findings from the 2019 Joint Review Panel report stated, “there will be significant adverse project and cumulative effects on certain environmental components and Indigenous communities,” including “use of lands and resources, and cultural practices of Indigenous communities.”

For years Indigenous communities in the region have been working tirelessly to address the legacy of harms from tar sands expansion through regulatory participation, legal challenges, and direct negotiations with government, yet no project has ever been denied approval. Proponents of the mine have highlighted that 14 Indigenous communities have signed Impact Benefit Agreements (IBAs) with Teck Resources Ltd, touting the agreements as support for the project. It should be noted that Indigenous communities do not receive direct royalties or benefits from tar sands projects, making private and confidential IBAs one of the only avenues for compensation for loss and damages created by the industry.

“IBAs are not an enthusiastic yes for this or any project,” explains Eriel Deranger, Executive Director of ICA. “In fact, many of these communities continue to be intervenors in the JRP process to raise concerns about environmental, health and cumulative impacts. However, IBAs have become a last resort for many Indigenous communities who feel their voices and concerns are being ignored. While IBA’s provide minimal compensation for impacts they should not be misconstrued as a blanket endorsement for project proposals. The fact that IBAs exist is a clear indication that governments are failing their fiduciary responsibilities to protect and uphold the rights of local communities.”

“Our community’s survival is at stake,” states Chief Gerry Cheezie of Smith’s Landing First Nation, a downstream community who has not signed an Impact Benefit Agreement and is opposing the Teck Frontier project. “We are already feeling the impacts of the changing climate and the environmental degradation caused by the historical industrialization of our lands and territories. We can’t afford another tar sands project.”

“We are absolutely saddened and angered with the gross scale of the proposed open pit Teck Frontier Tarsands Mine, which would devastate the lands and waters and drastically increase Canada’s GHG emissions,” commented Grand Chief Stewart Phillip of UBCIC. “We stand with Indigenous Peoples across Turtle Island defending their Title and Rights who would be directly impacted – both by the proposed Teck Frontier mine and the pipelines needed to get the oil out. Approving this project would demonstrate a glaring lack of commitment to address climate change by this federal government.”

Kanahus Manuel, with Tiny House Warriors and occupying Secwepemc territory in the path of the TransMountain Pipeline, says, “We connect from ground zero – from impacted communities in the Alberta tar sands to the California coast – to unite against projects like the Teck Mine that would have impacts on us all. This is about Indigenous land rights and self-determination.”

“It’s long past time for Canada to honour and respect Indigenous rights by rejecting the Teck Mine,” stated Ta’kaiya Blaney, ICA Regional Youth Coordinator and member of the Tla’amin Nation. “Natural gas that powers these dirty oil projects is being extracted from regions like the Wet’suwet’en where companies like Coastal Gas Link are pushing Liquid Natural Gas (LNG) pipelines and projects without consent. Our struggles are connected not only by our rights as Indigenous Peoples but by the very infrastructure that threatens our lands and peoples.”

A new report released by the Institute for Energy Economics and Financial Analysis, demonstrates that proceeding with the Teck Frontier Mine would be “misguided and reckless.” Additionally, a report released by 17 research and campaigning organizations in December used oil and gas industry projections to show that Canada will be one of the worst violators of the Paris Agreement if it expands its oil and gas extraction as planned, second only to the United States.

Public support to reject the Teck Frontier Mine has been increasing, with celebrities such as Jane Fonda and Joaquin Phoenix endorsing the #RejectTeck campaign at a recent Firedrill Friday event in Washington, D.C.

The decision for final approval or rejection may come down to the wider group of Liberal Cabinet Ministers; the decision was initially expected to be made by February 20, 2020, but may be delayed.