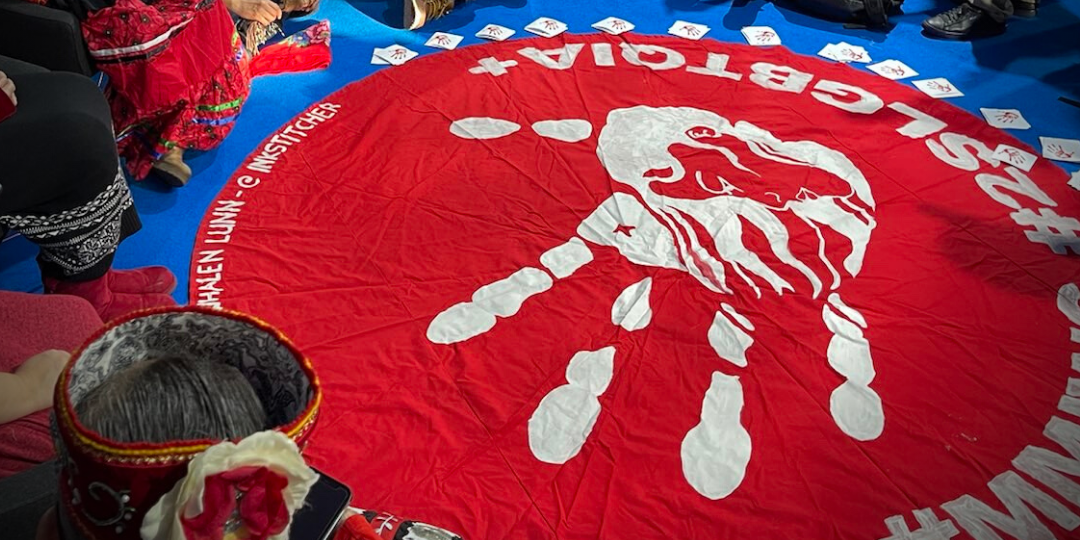 Indigenous-Led Action In Memory Of MMIW And Relatives

Glasgow, Scotland – Indigenous community members from around the world gathered today at the global climate conference, COP26, to highlight the disturbing correlation between Missing and Murdered Indigenous women, queer, trans, and two-spirit peoples and the resource extraction industry – oil and gas, mining, forestry, and hydro development – which are root causes of the climate crisis.

”Indigenous women are the primary line of defense against the violence perpetrated by extractive industries on our territories. We defend with our own bodies the health of our families, communities, and lands, and we fight every day against the colonialist exploitation of multinationals from the global North. We demand that the world respect our autonomy and respect the forest as a living being with consciousness and that extractivism in the Amazon and all over the word end NOW.” -Mireya Gualinga, Member of the Government Advisory Board of the Kichwa Community of Sarayaku

As climate chaos rages forward, Indigenous communities and land defenders continue to remain on the frontlines challenging the continued expansion of major contributors to the climate crisis. According to the Front Line Defenders 2020 report, the three most targeted sectors of human rights defence were: land, environmental and Indigenous Peoples’ rights (21%), LGBTIQ+ rights (14%), and women’s rights (11%). Of the 331 human rights defenders killed in 2020, 26% were working on Indigenous Peoples’ rights.

In 2016, the international community was horrified when Berta Caceres, a Lenca Indigenous rights fighter, co-founder of the Council of Popular and Indigenous Organizations of Honduras, and Goldman Environmental prize winner was assassinated. Her murder galvanized global protest to pressure the Honduran government to charger her killers and the authorities that ordered her murder. Her death highlighted the extreme dangers that women face when challenging governments and extractive industries.

“The murder and disappearance of Indigenous women, queer, trans, and two-spirit peoples is a form of colonial violence that impacts Indigenous communities globally,” explains Cheghajimixw from the Tla’amin Nation. “Violence against our bodies accompanies violence against the lands in the form of resource extraction, fossil fuel industries, and the policing of our resistance movements by settler governments. We are of the land, and as our lands are targeted so are we. There will be no climate justice until there is justice for every Indigenous person murdered in the name of extractive economies.”

There are clear connections between the destruction on the land and the desecration of the lives and bodies of Indigenous peoples, especially women and girls. Many of the extractive industries require “man camps” — resource extraction sites employed by a male-dominated transient workforce. These camps correlate with an increased rate of sexual assault, harassment, STIs, and human trafficking.  This was such a problem that Canada’s National Inquiry into Missing and Murdered Indigenous Women and Girls dedicated an entire section addressing the violence at extractive sites and included five government-level recommendations to address the crisis.

While many activist groups and Indigenous nations have outlined the connection of extractive projects and sexual violence for decades, a 2017 article in the Harvard Journal of Law and Gender cites that “rural communities do not have the infrastructure, leadership capacity, or expertise to respond to the rapid social changes and population growth,” which creates conditions where violence against Indigenous women festers. Extractive industries pose such a threat to Indigenous women, queer, and trans people that some Indigenous nations have chosen to supply their health centres with rape kits to prepare for the influx of male workers.

“They look at us just as disposable, just like they look at our frontline communities as sacrifice zones. Man camps move through, they set up in hotels and motels. They bring drugs and alcohol, they steal our women through direct kidnapping and through enticements, and then They’re never found again.” Casey Camp-Horinek, Ponca Nation Environmental Ambassador

Indigenous communities face some of the worst impacts on the frontlines of extractive industries that are exacerbating the climate crisis further putting our life ways at risk. Deforestation, destruction of wetlands, loss of traditional food sources, water scarcity and contamination, increased illnesses associated with all of the above. Moreover, our communities are experiencing new forms of colonialization, cultural genocide and femicide associated with the climate crisis and continued business as usual by high emitting industries.

“We want to tell the world that the jungle, our home, is bleeding from the presence of extractive mining and oil companies that are destroying the only forests we have left; today as we are here, thousands of hectares are being cut down and our culture and identity is in danger. We want the banks and governments to understand once and for all the immense damage that they continue to cause to our peoples when they finance the trade of Amazon crude; today they have the opportunity to show the world that they are on the side of humanity’s survival, and finally stop the devastation of the planet.”-Nemo Andy Guiquita, Director of Women and Health for the Confederation of Indigenous Nationalities of the Ecuadorian Amazon (CONFENIAE)