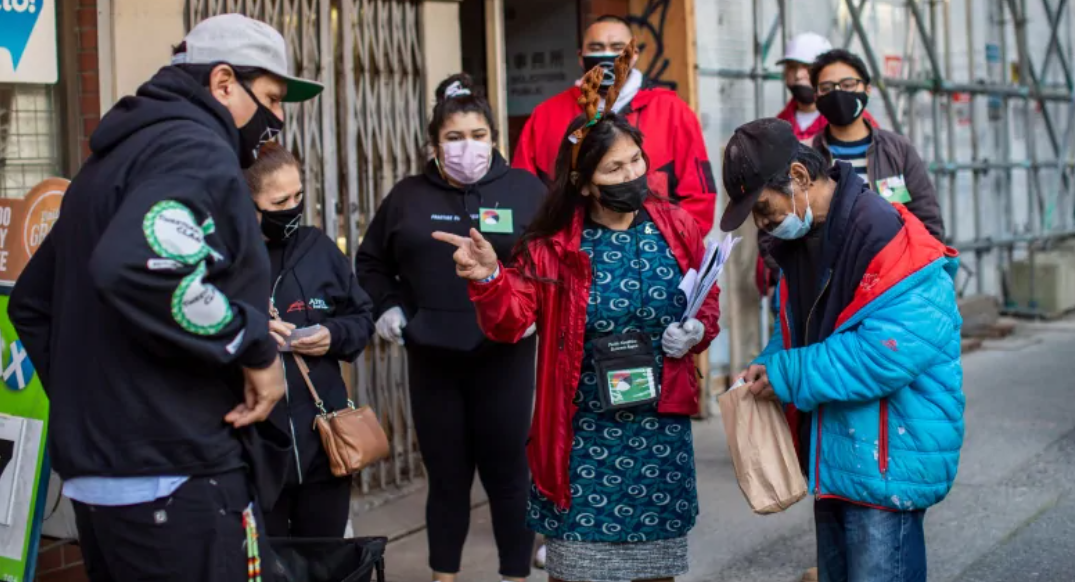 Above photo: Sadie Cote, a member of the Sweet Grass patrol, hands out a donation bag in a Downtown Eastside neighbourhood of Vancouver, B.C., on Friday. Ben Nelms/CBC.

An Indigenous-led patrol in Vancouver’s Downtown Eastside is hoping for funding from the city so it can expand to provide services similar to a well-known patrol in Winnipeg.

The Sweet Grass Clan patrol was launched last summer through the Aboriginal Front Door Society at Hastings and Main Streets. It aims to establish a community-based, Indigenous-led patrol much like Winnipeg’s Bear Clan patrol, which started small but is now a major presence keeping the peace and assisting residents in inner-city communities.

During the COVID-19 pandemic, the group is connecting with people on the street, handing out essential safety items like masks and hand sanitizer. Their goal is also to calm tensions and some Vancouver councillors have taken notice. They say the initiative may be an effective tool as the city looks at alternative safety measures for the DTES.

“I think what Sweet Grass Patrol is doing that’s different is sort of taking this de-escalation, crisis intervention and bringing it into practise and doing it through an Indigenous lens,” said Coun. Pete Fry.

Coun. Jean Swanson has expressed support for the group. Coun. Christine Boyle said in an email to CBC News that the group is an “interesting example of community-led public safety efforts.”

Despite accounting for only 2.2 per cent of Vancouver’s population, according to the 2016 census, Indigenous people make up more than one-third of all those experiencing homelessness according to the latest count from this summer.

The DTES also has the highest per capita rate of total COVID-19 cases for any of the 89 local health regions in the province, with more than one per cent of residents having a confirmed case.

Marie Babisky, one of the founding members of the Sweet Grass Clan patrol in Vancouver, said the pandemic spurred her and others to take action.

“We feel at this point of COVID we need to get in there and start helping our community,” she said. “There’s a lot of other organizations that do help but the more help there is out there, the better.”

To respond, Babisky along with Robert Epp, who works for the Aboriginal Front Door Society (AFDS), organized a small group of mostly Indigenous volunteers who began putting together kits and handing them out. They check in with people and take further steps to help those looking for housing or other services.

Sholeh Livarjani, a registered clinical councillor with the AFDS, says the patrol, which is mostly funded with donations, goes beyond just keeping people from going hungry.

“Giving them food is not enough, they need more, more attention in their lives, to see them, to acknowledge them, respect, accept them as they are and help them grow,” she said.

As Epp pulled a wagon full of supplies, he said the group also wants to play a role in defusing tense or potentially violent situations in the DTES.

“We’re out there saying maybe we can quiet the edge down there a little bit by getting out and getting our presence known,” he said. “That they can be safe, there are people that care about them.”

Epp says the group could be part of the peer-led, community response some people are looking for as an alternative to conventional policing models, which have been under scrutiny in cities like Vancouver.

Epp is hoping up to $300,000 could eventually be diverted to the Sweet Grass Clan patrol to hire staff, buy supplies and provide training such as occupational first aid to patrollers.

“It’s a big undertaking,” he said. “This is just the start.”

On Friday, Fry met the group as it made its rounds. He handed out business cards, posed for selfies and said he wanted to meet with the patrol’s leaders.

“It’s fantastic, You know this is the grassroots advocacy that kind of gets to issues proactively rather than reactively.”

Fry hopes to have discussions with colleagues during the current budget consultations to find money in the upcoming year for the patrol.