Above Photo: Four people are locked to two tripods blocking business at the 5th and Olive Bank of America. SB

At 11 o’clock this morning, four people chained themselves to a structure blocking an entrance of the Bank of America on 5th and Olive Street. Two of them locked themselves to the apex of a tripod, suspended at least a dozen feet in the air. The protesters were still there as of 2 p.m, blocking people from entering the bank.

Around the corner of the building was Feanette Black Bear, 65, holding the end of a sign blocking the building’s other entrance and a bundle of sage. “We shut down business today!” she said.

For Black Bear, who is Lakota, today’s action grows out of what she calls “an awakening for future generations.”

“I’m here in support of our future generations, the unborn, and for the people here today, for Mni Wiconi, for treaty rights,” Black Bear said, using the Lakota rallying cry heard at Standing Rock last year, and since then, the world over. In Lakota, Mni Wiconi translates to “water is life.”

The Bank of America protest is just one of 100 demonstrations taking place across Seattle as part of Divest the Globe, a three-day activism campaign organized by Mazaska Talks, an indigenous-led coalition including Lakota educator Matt Remle and Muckleshoot activist Rachel Heaton, with support from 350 Seattle’s Alec Connon. Remle reported on Twitter that at least one other bank was shut down in Seattle.

As of 3 p.m., Seattle police had arrested four people participating in the bank protests at 2nd Ave and Union and were in the process of arresting another three people on 3rd Ave, Seattle Police Department spokesman Det. Mark Jamieson said. 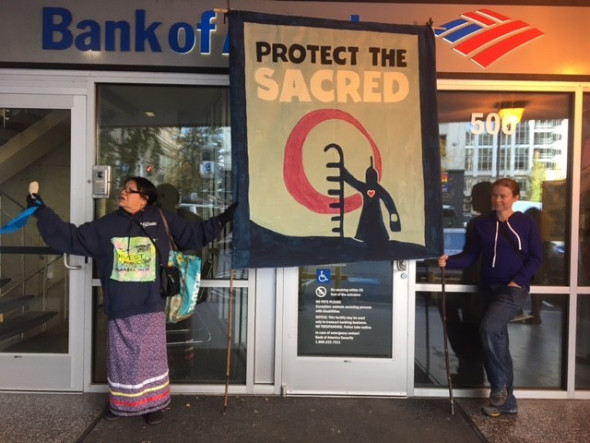 Organizer Rachel Heaton told The Stranger that Mazaska Talks—Mazaska being the Lakota term for “shiny metal,” as in money—urges people to divest themselves from banks that finance private prisons and pipelines. While activists targeted Bank of America because of its involvement in financing Alberta tar sands extraction, Heaton said that the days of action are also meant to draw attention to the 92 banks meeting in Brazil this month that have signed on to the “Equator Principles,” a framework that’s supposed to help guide financial institutions’ social and environmental responsibilities when financing new projects.

“We didn’t want to just focus on fossil fuels because there are so many projects going on worldwide that are contributing to the desecration of our future and our children’s future,” Heaton said. 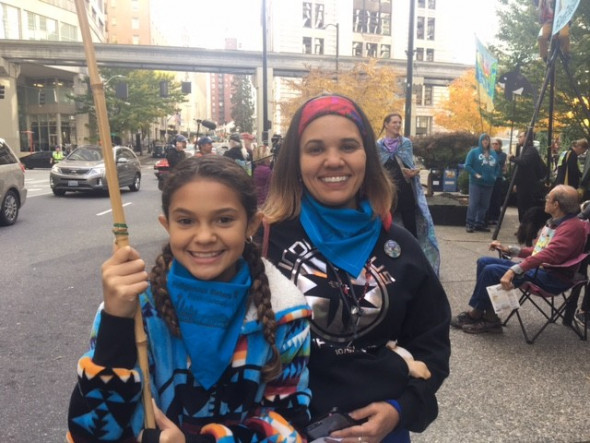 From left: Nylah Pedebone, 11, and her mother, Rachel Heaton.

In February, the Seattle City Council voted to end its relationship with Wells Fargo over the company’s financing of the Dakota Access Pipeline, private prison companies, and the bank’s recent regulatory scandal involving two million unauthorized accounts. As a next step, Mazaska Talks is urging the city to consider a municipal bank, an idea echoed by Seattle City Council Member Kshama Sawant. Last week, Sawant proposed allocating $200,000 to a feasibility study on whether a municipal bank in Seattle could work.

The four people locked to the structure blocking the Bank of America are not indigenous, but they see the action as an opportunity to use their relative privilege to advance a common goal.

“The call to look to the banks and make sure the banks stop funding these projects came from indigenous people, came from Standing Rock,” Valerie Costa, 36, who was chained to a leg of a tripod when I spoke to her, said. “We’re really trying to respond to that call. It’s very much in line with the work I’m doing as a climate change activist, and all of the projects completely disrespect indigenous treaty rights. So I feel fortunate that I’m in a position that I can do this and not take much risk.”