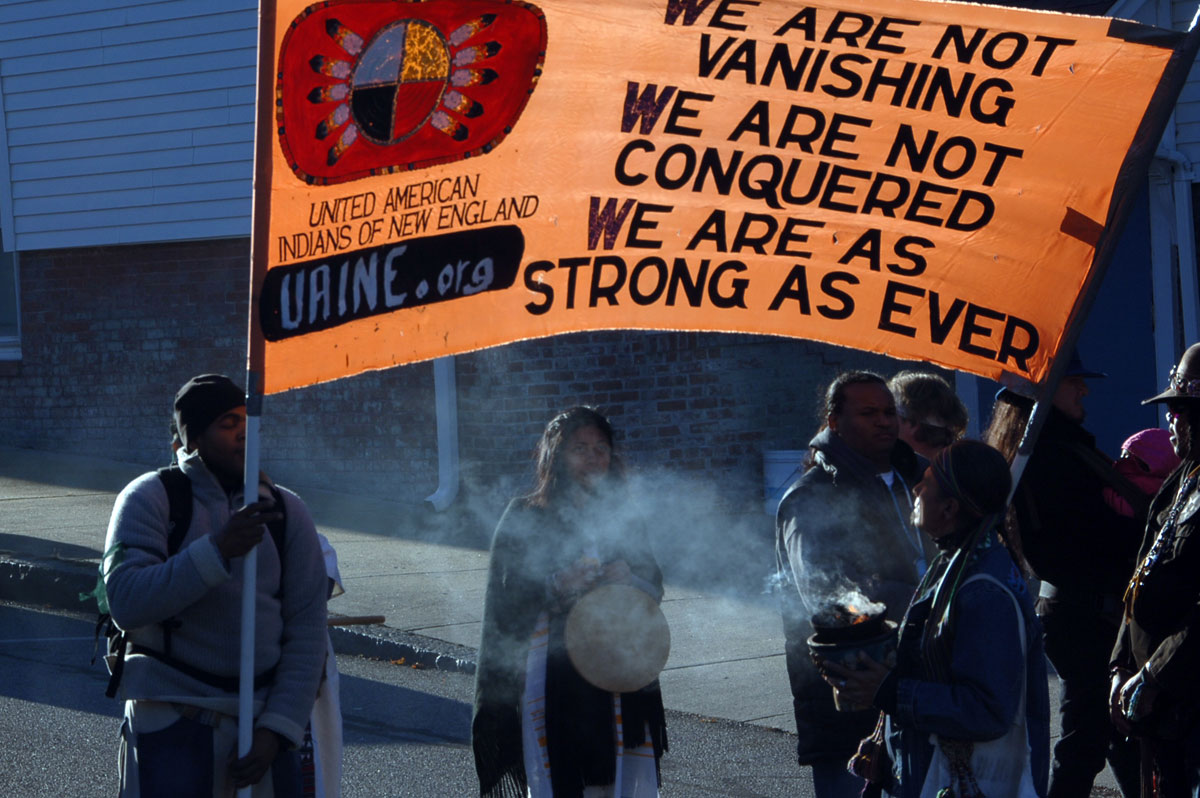 Indigenous National Day Of Mourning: “We Are All Human Beings”

Before noon, Anawon drummed and sang; it was an honor song and the notes caught in the heart of the asymmetrical down beats of the drum were like the choke of emotion  in the voice of the wolf, mourning the dead. He sang the song for   the hundreds of years of oppression, stolen  land, theft of dignity, and to honor those who died unrecognized of his people, the Wampanoag, who welcomed the white men to what would be named by them, Plymouth.

Mooanam James, Frank James’s son, continued his father’s legacy on this the 44th Day of Mourning, “the UnThanksgiving” commemoration, near the statue of the massassoit  (the Wampanoag  leader who had welcomed the English in 1621.) James’s father had been uninvited to speak at the  350th anniversary of colonial  Plymouth because he had wanted to tell the truth.

It was the Pilgrim values, to dominate the earth, to band together, not, James said, for religious freedom, but as a corporate entity for the sake of profits  (through The Plymouth Company), which  still ruled today, causing injustice, poverty, damage to the earth, and her water and air. This was the real inheritance. Racism and sexism, violence beyond any the natives had practiced, was brought by the colonists. This their lasting and now global legacy.

A Mayan elder gave the blessing, a prayer offered with copal smoke and a turtle shell drum to the four directions and the sky and earth. He led the 300 people in turning to the east to thank  the light of life where creation rises, to the south for where the rains came from, to the west where the “beautiful sacred darkness” dwells with the star spirits to which we will all return. As he did so a crow called. (It is this bird which is sacred to the Wampanoag for bringing corn from the southwest). As we turned to the north, the most sacred winds were blessed and thanked. Sky,  then earth we knelt down to place foreheads upon the mother, thank her for giving us all our needs, food, shelter, and strength to continue to fight against those who would harm her.]

A banner proclaimed that  “corporations have more rights than native peoples.” Speakers called on us all to  reject the corporate and corrupt values of materialism and competitiveness which were causing harm to fellow human beings and to the earth.

“When they have killed the last human and the last plant and animal, the warriors will arise to heal the earth, using the power, the secrets of the wind and stars,” the Mayan elder foretold.

It was not just about the wrongs done to indigenous people, but to thank all like-hearted people for being part of the circle. “We are all one. We are all human beings” was a theme throughout.

It was not just the suffering of native peoples, but of immigrants, of victims of war in Afghanistan and Pakistan, victims of oppression in Palestine, victims of  poverty and hunger; those affected by global warming — by terrible typhoons in the Philipines. This legacy of ecocide and genocide linked by the speakers.

We gave one another hugs and rededicated ourselves to action, whether to stop fracking, to end hunger and the causes of impoverishment and inequity, or to stop the violence of war or of toxins such as nuclear waste. Local or global.  To take action.

The last speaker whose name sounded something like Mitakiasin, spoke of refinding  earth through language, the language of his people the Lakota. Mitakue oyasin, all my relatives.  His name perhaps derived from that phrase.

He said he had been at Auschwitz and other concentration camps with  fellow  Lakotas and wondered, do we even have a word for domination in our language?

He said we often thank earth for giving us a good day, but does it work the other way; do we try to give the earth a good day, as well?  (This is particularly close to my heart, because I have thought that nature needs us and misses us when we are absent from participating with her.)

Just as one woman began to talk about the misuse of nature by the dominant culture, a cooper’s hawk flew low over the podium. Nobody seemed to notice this blessing but me.

A man behind me asked his mate why the Indians were black. I asked where he was from.  “Danish on vacation for a fortnight.”  I explained that escaping slaves  had found haven in Mashpee and intermarried; that here were not the race boundaries, that when Wampanoag men went  off to the French and Indian wars, the widows married the black men protected in Mashpee; that there was white black and red here.
And there were white, black, Asian, red and multi-racial faces here. A real rainbow circle.

Leonard Peltier sent a message as he has done for the days of mourning, for all the  39 years  he has been incarcerated. He mourned the loss of freedom, when we have become wage slaves and when  children have no fathers because they are working 2 and 3 jobs to survive. When our civil rights are violated  increasingly by an ignored Constitution.  He warned of increasing corrupted democracy in the service of might.

The day ended with a procession carrying banners such as Free Leonard, chanting for him and for Mumia.  And a banner  from the organizer UAINE  United American Indians of New England saying We are not vanishing; we are not conquered; we are as strong as ever….

On the way home, a screech owl flew very low across the road in front of me. (Stay low to the ground it said.)