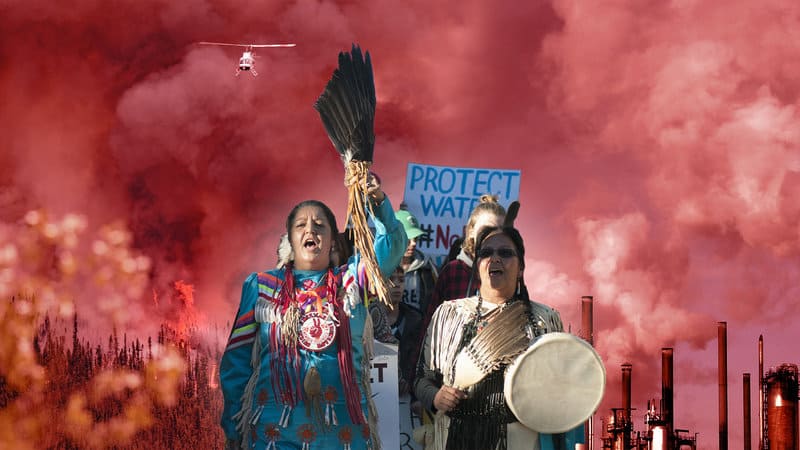 Indigenous Rights Are A Counterforce To The Climate Crisis

Above Photo: The Breach

Hours after narrowly escaping the fire that scorched his town, Lytton, B.C. resident Gordon Murray offered a warning to the rest of us.

“We are a small, rural, Indigenous, low-income community, and we’re the spearpoint of climate change – but it’s coming for everybody,” he said on a national newscast, still wearing the same clothes he wore the day before, when he and his partner had fled their home.

The harrowing images of smoke and fire the couple filmed while escaping the inferno looked like a scene out of a dystopian film. But it wasn’t.

In the days leading up to the fire, Lytton shattered Canada’s all-time heat record three times, registering a blistering high of 46.6 degrees celsius on Sunday, 47.9 degrees on Monday, and 49.6 degrees on Tuesday. On Wednesday, the town was gone.

All of this felt all too familiar. In 2016, wildfires spread across my traditional territory in Treaty 8 in northern Alberta, creating the largest evacuation in Alberta’s history. Over 88,000 people —including my aunts, uncles, cousins, and family—were forced to leave their homes.

In a matter of days, more than 2,400 homes and buildings were destroyed in the city of Fort McMurray, Alberta. Just like Lytton, the wildfires in northern Alberta were precipitated by a dry winter and unseasonably hot temperatures—and happened 5 months after the historic United Nations Paris Agreement on Climate Change was adopted to stave off global catastrophe.

A week before the Lytton burned down, a leaked draft report from the UN’s Intergovernmental Panel on Climate Change (IPCC) expressed climate scientists’ most urgent warning yet on climate tipping points — if we pass them, it will be impossible to reverse the processes that could make Earth uninhabitable for humans.

I had one thought after hearing about the stories of Lytton and the IPCC report, juxtaposed to my own experiences here in Alberta: we are truly living through the climate crisis.

What’s frightening at this late stage is the absolute unwillingness of settler colonial governments like Canada to do one of the things that represents our best collective shot at reducing carbon emissions: stop excluding Indigenous peoples from decision-making processes on climate action.

Climate plans as tools of colonization

During its six years in office, the Trudeau government has made countless promises around climate change and Indigenous rights that create the optics of progress. However, a recent analysis by Indigenous Climate Action of Liberal climate policies outlines how current plans included increased oil and gas production as well as clear structural exclusion of Indigenous peoples from decision-making. That is not only bad for our collective future, but it is also a violation of rights of Indigenous peoples’ as outlined in the government’s own reports and commissions.

As part of a research project on federal climate policy, Indigenous Climate Action found that from the early stages all the way through the development, planning and implementation of its climate plans, Canada excluded Indigenous nations at the working groups, in discussions, and in formation of climate policy. These actions along with poor and compromised plans constitute new and ongoing violations of the rights of Indigenous peoples.

Not only do Canada’s climate policies fly in the face of the prime minister’s promised prioritization of Crown-Inuit, Nation-to-Nation and government-to-government relations with Indigenous Peoples, but they undermine real action on climate change.

Since coming to power in 2015 the Liberals have released two major climate plans: the Pan-Canadian Framework on Clean Growth and Climate Change (PCF) in 2016, and the Healthy Environment and a Healthy Economy (HEHE) in 2020.

While the plans represent Canada’s strongest promises to date on reducing greenhouse gas emissions, they are not strong enough. As one example, instead of ending fossil fuel extraction, through the pandemic Canada incentivized the industry with billions of dollars in subsidies.

In one hidden subsidy, Canada created a “polluter pays” mechanism for industry players to buy their way out of reducing emissions. So-called “nature-based solutions” or “land-based offsets” allow oil and gas corporations to buy up land under the guise of protecting ecosystems, when in reality they are benefitting from a new form of colonization—again without the free, prior and informed consent of Indigenous Peoples.

Both of Canada’s climate plans serve as tools of colonization by prioritizing big business and focusing primarily on the needs of settler society in urban areas. They fail to provide mitigation measures or adequate crisis management plans that acknowledge or take into consideration the lack of infrastructure, such as drinking water, effective sanitation systems, and adequate housing that continue to devastate Indigenous communities. By ignoring the realities of Indigenous communities’ existing extreme vulnerability, the policies fail to meaningfully plann for how the added stresses of climate instability will impact our communities.

We need look no further than northwestern Ontario, where at two weeks ago Nishnawbe Aski Nation (NAN) communities were evacuating as dozens of forest fires raged in their territories. On July 12, NAN Grand Chief Alvin Fiddler called on the Government of Ontario to declare a state of emergency to trigger a response from all provincial agencies and organizations to help stop the spread of fires and evacuate its people for temporary relocation.

“This situation is worsening by the hour,” Fiddler said that day, adding “this is quickly becoming a NAN-wide emergency and requires an immediate, coordinated response.” At the time of publication that call still had not been heeded.

Canada maintains the same antiquated, paternalistic attitude towards our peoples that sanctioned residential schools and the pass system—they act as if they know what’s best for us. Our rights, our knowledge and values are not included or taken seriously and we are a mere afterthought when our lands are on fire, our communities are evacuating, and as we watch our futures going up in smoke.

It’s clear that we need to move away from this paternalistic relationship and it’s time for Canada and the provinces to uphold and respect the rights of Indigenous peoples by directly including and resourcing our people and knowledge systems in high level decision-making processes around climate action. For decades now our involvement in climate targets, mitigation and adaptation strategies—grounded in Indigenous values and cosmologies—at the international level have led to historic documents like the Declaration of Kari-Oca in 1992 ahead of the Rio Earth Summit, the Anchorage Declaration in 2009 before COP15, and the preamble of the Paris Agreement in 2015. All recognized the necessity of Indigenous knowledge, sovereignty, and rights to climate solutions and stabilization.

The climate crisis cannot be addressed in any meaningful way without addressing its root causes—capitalism, colonialism and extractivism. Canada must fulfil its promise to respect Indigenous rights and self-determination, including the necessity of free, prior and informed consent from First Nations, Inuit and Metis communities. It must include Indigenous communities and nations as full partners at policy decision-making tables, adhere to its own promise of Nation-to-Nation, Inuit-Crown and government-to-government relationships, and enact the actions put forth by the Royal Commission on Aboriginal Peoples, the Truth and Reconciliation Commission, and the National Inquiry into Missing and Murdered Indigenous Women and Girls.

Canada’s own commissions and reports have provided a map for a just and honourable path forward. And as with climate solutions, Indigenous peoples continue to be leaders in advancing solutions grounded in our traditional knowledge and advancing holistic approaches to the climate crisis, and have been telling colonial governments for decades how we would like to proceed.

First Nations, Metis and Inuit communities offer an abundance of teachings, worldviews, alternative livelihoods and economic systems that value interdependence, reciprocity and respect for all life.

These are the counterforce to the extractive, exploitative colonial-capitalist systems at the root of the climate crisis.

These are the climate solutions that are urgently needed.