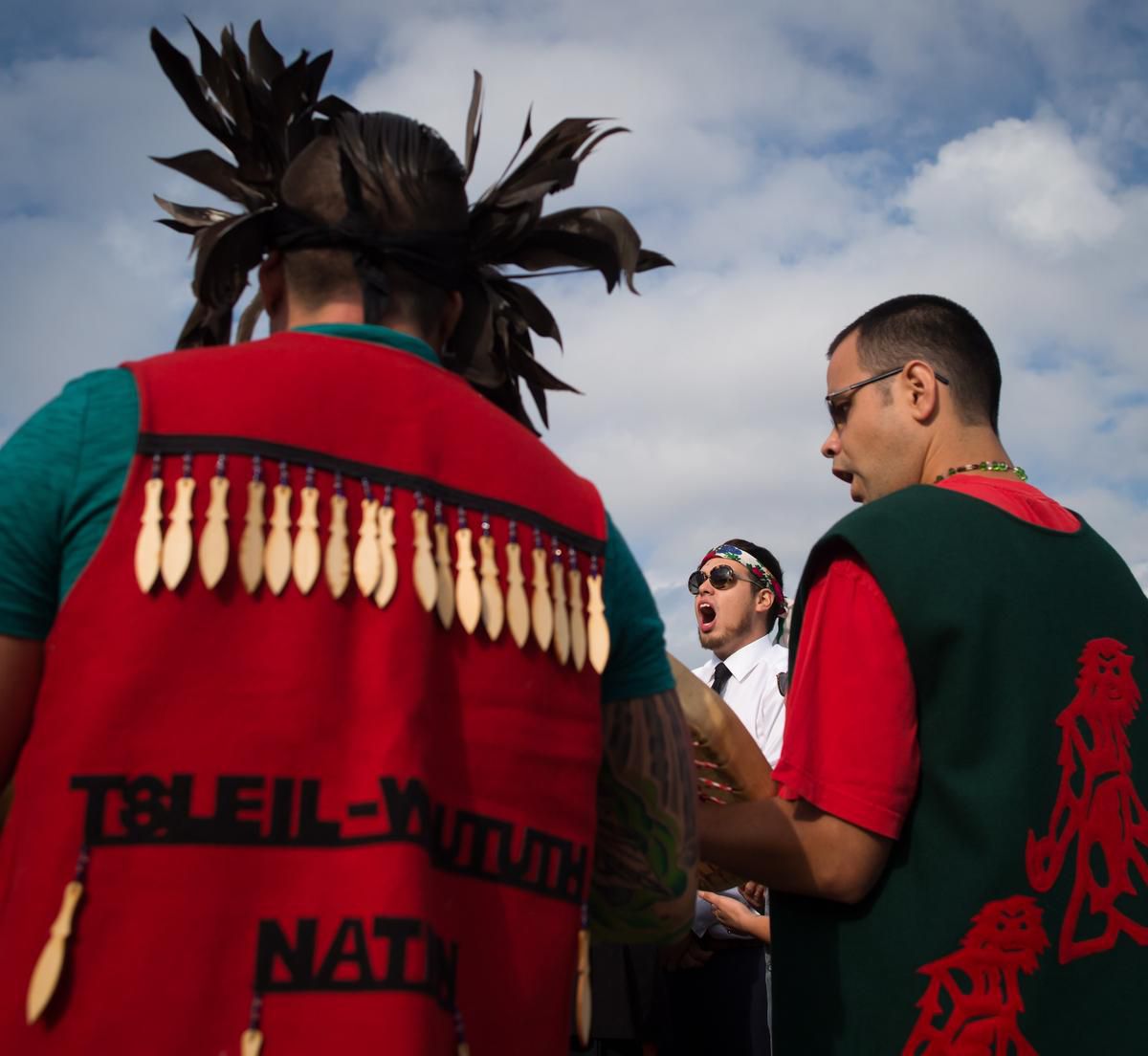 Above Photo: Cedar George-Parker, back centre, sings as others drum before First Nations leaders respond to a Federal Court of Appeal ruling on the Kinder Morgan Trans Mountain Pipeline expansion, during a news conference in Vancouver, on Aug. 30. In a unanimous decision by a panel of three judges, the court says the National Energy Board’s review of the project was so flawed that the federal government could not rely on it as a basis for its decision to approve the expansion.  (DARRYL DYCK / THE CANADIAN PRESS)

The major court victory last week against the Trans Mountain expansion tarsands pipeline and tanker project has given rise to a vicious debate amongst federal and provincial political parties; however, lost in the vitriol of Canadian politics is what should be the key takeaway from yet another pipeline dead end.

This is the story of the rise of an order of government that has been silenced and bullied by Canada and settler-colonial forces for hundreds of years.

This is the story of collective Indigenous governance and Indigenous resistance that the Canadian federal government has always feared.

This mortal blow against the expansion of Trans Mountain, now owned by Canada after Kinder Morgan recognized its inevitable disaster, along with the deaths of Northern Gateway and Energy East are the most prominent examples of a widespread movement taking place across Turtle Island where Indigenous peoples are fighting against oppressive governments and dirty energy projects, and reclaiming their rightful place as stewards of these lands.

Despite hundreds of years of colonization, genocide and violence, we are still here. We are still here and we will continue to be here to fight for the health of our lands, waters and peoples. Government and industry can continue to ignore our lack of consent at their own peril.

While Indigenous peoples can disagree, just as all humans do, what we do agree upon is our inherent right to self-determination within our territories. This includes holding government bodies accountable to the principles of the United Nations Declaration on the Rights of Indigenous Peoples (UN Declaration), which the government of Canada has committed to implement.

We owe much to the First Nations who won the court case against the government of Canada last week, but we also owe deep gratitude to the Indigenous and non-Indigenous peoples who have organized resistance and support from around the world.

Indigenous land defenders and water protectors, such as the Tiny House Warriors and the Protect the Inlet Watchhouse (“Kwekwecnewtxw”), have been standing, ready and waiting, to confront the pipeline head on as construction threatened to violate their rights and laws.

The 150 First Nations and United States Tribes who have signed the Treaty Alliance Against Tar Sands Expansion have said since its launch in 2016 that there will be no more expansion of the Alberta tarsands, including the proposed Teck “Frontier” mine, and that the Treaty Alliance will stop all the new pipeline and rail projects, along with their associated tanker traffic.

Through resistance to Trans Mountain and other projects, Indigenous peoples have obtained the support of people from all backgrounds who are ready to take a stand for Indigenous rights, and for a just and equitable transition away from fossil fuels.

We are thankful for all the Coast Protectors, young and old, that have supported the struggle, sacrificed their time, energy, freedom and safety, to stand up to Big Oil and the Trudeau government.

It is important to recognize that the fight is not over. No one can relax in the face of this victory while similar injustices are currently taking place.

Enbridge is busy building a new tarsands pipeline that seeks to traverse the wild rice beds, waters and treaty territory of Ojibwe Tribes in Minnesota — right through the heart of Anishinaabe territory. All affected tribes are opposed to the project, and resistance camps have been set up all along the route, including in Manitoba.

Enbridge is replacing its old Line 3 pipeline, which has a current capacity of 390,000 barrels per day, with a new, expanded pipeline with the capacity to transport up to 915,000 barrels of diluted tarsands bitumen per day.

That’s a lot of dirty, toxic oil that, while it may not spill anywhere near B.C., will spill into our collective atmosphere, making the catastrophic climate change we are currently experiencing even more deadly.

Enbridge needs to be stopped and needs to shut down its existing leaky pipeline.

We are asking all our relatives and everyone that has been fighting these pipelines to support the fight against the industry’s last best hope of continuing to expand the tarsands.

This is yet another chance for Indigenous and non-Indigenous peoples in both Canada and the United States to stand together against oppressive governments and dangerous industries.

We’ve had enough of sitting idly by while climate change ravages our world.

We’ve had enough. Have you?