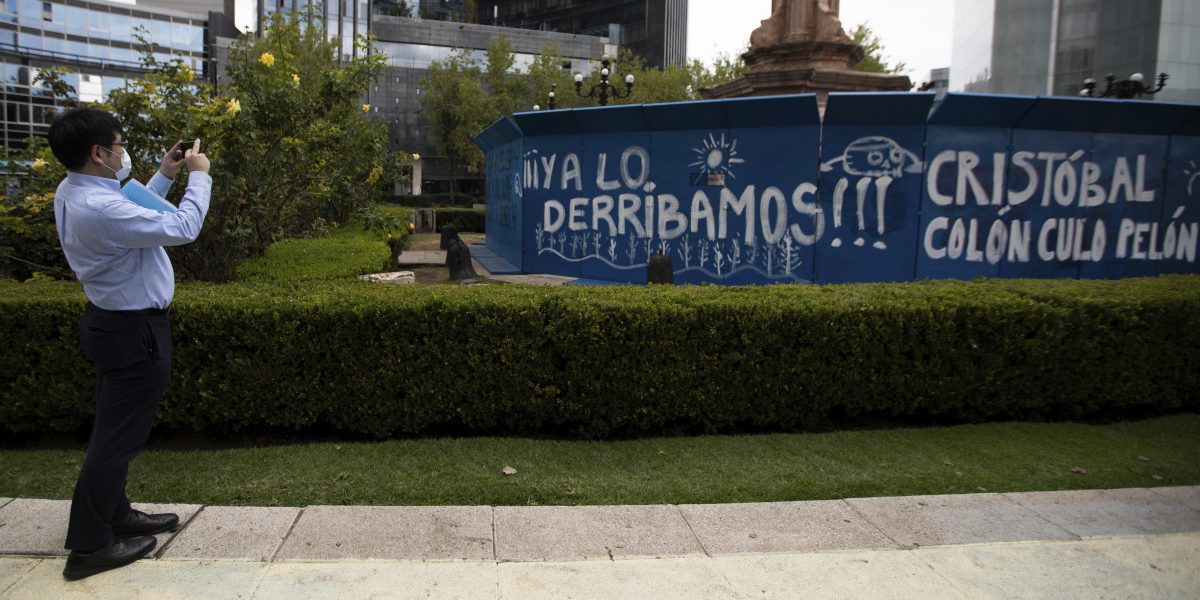 Above Photo: In this Oct. 12, 2020 file photo, a pedestrian takes a photo of graffiti on a temporary metal barrier set up to protect the perimeter of the Christopher Columbus’s statue which was removed by authorities on Paseo de la Reforma in Mexico Cito. Mexico City Mayor Claudia Sheinbaum announced on Sunday, Sept. 5, 2021 that the statue will be replaced by a statue honoring Indigenous women. AP Photo/Fernando Llano.

The mayor made the announcement on International Day of the Indigenous Woman.

Mexico City — Christopher Columbus is getting kicked off Mexico City’s most iconic boulevard.

Mayor Claudia Sheinbaum announced that the Columbus statue on the Paseo de la Reforma, often a focal point for Indigenous rights protests, would be replaced by a statue honoring Indigenous women.

“To them we owe … the history of our country, of our fatherland,” she said.

She made the announcement on Sunday, which was International Day of the Indigenous Woman.

The Columbus statue, donated to the city many years ago, was a significant reference point on the 10-lane boulevard, and surrounding traffic circle is — so far — named for it.

That made it a favorite target of spray-paint-wielding protesters denouncing the European suppression of Mexico’s Indigenous civilizations.

It was removed last year supposedly for restoration, shortly before Oct. 12, which Americans know as Columbus Day but Mexicans call “Dia de la Raza,” or “Day of the Race” — the anniversary of Columbus’ arrival in the Americas in 1492.

When the statue was removed last year, President Andrés Manuel López Obrador noted that “it is a date that is very controversial and lends itself to conflicting ideas and political conflicts.”