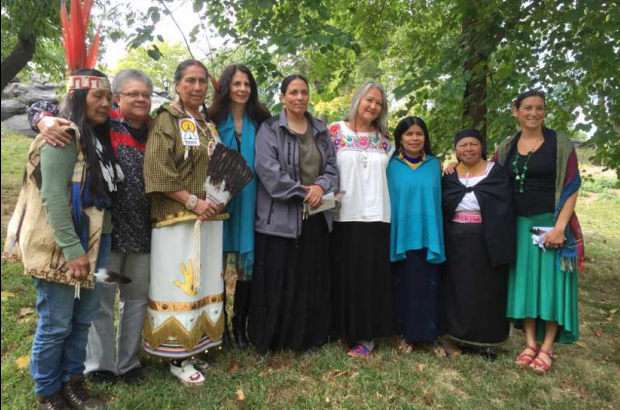 Above Photo: From Amazon Watch

On September 27th, I witnessed and participated in a ceremony of indigenous women leaders who gathered in Lanape territory in the East Meadow of Central Park, New York, in order to sign a historic Treaty in defense of Mother Earth. This is the first time that a Treaty has ever been signed between indigenous women of the North and South. Attendees included women from Abya Yala (North and South America), such as Casey Camp (Ponca Pa’tha’ta), Pennie Opal Plant (Yaqui, Choctaw, Cherokee), Crystal Lameman (Beaver Lake Cree), Patricia Gualinga (Kichwa de Sarayaku), Gloria Ushigua (Sapara) and Blanca Chancoso (Kichwa de Otavalo). The ceremony took place on the eve of the full moon, the super moon and the total lunar eclipse. This was no coincidence! It was meant to be.

After more than 500 years of conquest and colonization in the Americas, indigenous peoples of the North and South are fulfilling the prophecy of the Eagle and the Condor, “a time for the peoples of the Condor and the Eagle to fly and mate together in a creative symbiosis to restore and regenerate the Earth community.” According to the Pachakuti cycles of Incan peoples taking place every 500 years, now is the time for indigenous peoples and traditions to unite. Now is the time to support their calls for justice and protection of Mother Earth, for they are the ones who protect the world’s remaining biodiversity and much more. Following our prayers for our communities and Mother Earth, Grandmother Casey Camp read aloud the Treaty, which opens as such:

Two days later, on September 29th, the women presented the Treaty in front of 200 people at “Women Speak: Climate Justice on the Road to Paris and Beyond,” an event organized by our allies at WECAN (Women’s Earth and Climate Action Network). This event was part of the Global Women’s Climate Justice Day of Action, where women from more than 50 countries gathered together. Simultaneously, 40 indigenous women from the Amazon and the Andes gathered in Quito, Ecuador in an assembly to consolidate their proposal to keep fossil fuels and minerals underground as the most effective solution to climate change. They also gathered in ceremony in front of the Chinese Embassy in Quito to express concern about the impacts of Chinese investments on indigenous rights and territories. This is just one example of how indigenous women and allies are taking action in defense of Mother Earth in Ecuador.

In mid-August, an indigenous mobilization and national strike took place in Ecuador to protest government policies based on extraction of resources and constitutional amendments proposing indefinite elections. Protestors and communities were met with violent repression by the Ecuadorian government who called a “state of emergency” giving the military police free reign to brutalize, jail and intimidate people. Nearly 150 people were beaten and jailed, half of them women, including elders. Fifteen still remain in jail with no due process to this day.

In a meeting with representatives of the UN Permanent Forum on Indigenous Rights in New York, Patricia Gualinga, International Representative for the Kichwa community of Sarayaku in the Ecuadorian Amazon said, “We are very worried about the prisoners still in jail from the mobilization in August. We want them released and we want our rights respected. The government says that it respects our rights and the rights of nature, but that is not true! The government is treating us like criminals for defending our rights. The government is concessioning off our territories to China and infiltrating and dividing our organizations in attempts to show support for its extractivist policies. We do not support these policies. We have solutions, such as “Living Forests” that should be recognized as cultural patrimonies of indigenous peoples. We will bring our proposals to COP 21 in Paris to show the world that indigenous peoples have solutions to climate change.” While President Rafael Correa addressed the United Nations General Assembly in New York, we called on the United Nations to urge President Correa to respect indigenous rights and to end the criminalization of nonviolent protest. Next week, we will stand with our indigenous allies as they present their concerns at hearings at the Inter-American Commission of Human Rights in Washington DC, and we will stand with them until the prophecy of the Eagle and the Condor is realized. We really have no other option for our children and all future generations.

As a witness of the historic Treaty in defense of Mother Earth, I share with you the final words and ask you to join us in a prayer for Mother Earth, for it is a new moon.

We call upon our sisters and their allies around the world to gather together on each new moon to pray for the sacred system of life, guidance and wisdom, and, on every solstice and equinox to:

Become educated concerning the harms to life and the environment

Pledge to support the rights of Indigenous Peoples

Pledge to nonviolence and become trained in nonviolent direct action