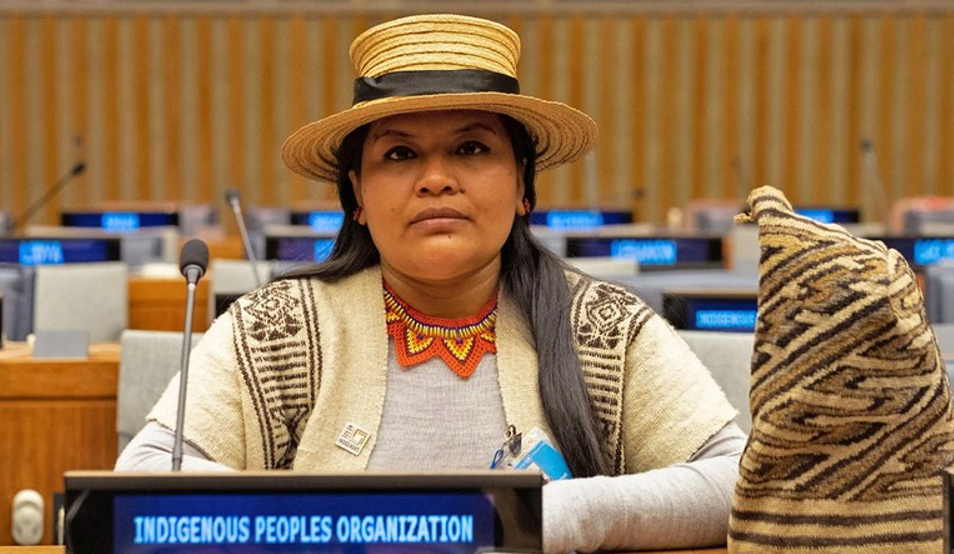 Indigenous Women Say ‘No’ To Extraction For Sustainable Future

Women from the frontlines of extraction projects, and the boardrooms that fund them, came together to call for the end of extraction to ensure a sustainable future.

At the world’s largest gathering of Indigenous leaders, women are talking about how to hold financial institutions accountable for fueling climate catastrophe through investments in the extractive industry.

Michelle Cook, Navajo, was among those who offered powerful testimonies focused on the women at the frontlines of extractive projects, the boardrooms of financial institutions, and the halls of governments. Speaking at a side event hosted by Women’s Earth and Climate Action Network at the 21st session of the U.N. Permanent Forum on Indigenous Issues in New York, Cook described the work as being part of a sacred obligation.

“That’s what we’re doing, fulfilling a prayer for the world – for nature – with love, compassion, and with courage. No other weapon than that, the truth,” Cook, the founder of Divest Invest Protect, said. “For some, that is so terrifying. Indigenous women will not give up … We will not be intimidated, shamed or be afraid just for being who we are.”

The international forum side events offer participants the opportunity to continue thematic dialogues outside of the forum’s schedule, which is more limited than previous years due to the pandemic and is operating on a hybrid format this year. Summer Blaze Aubrey, Cherokee and Blackfeet, is a staff attorney for the International Indian Treaty Council and also spoke on the panel. She noted that racism and genocide are at the center of human rights violations around the world. Atrocities are ongoing and fueled by the extractive industry, she added, even with “green energy” initiatives moving forward. She pointed to the White House’s rhetoric on Russia and the Defense Production Act, which was enacted to jump start new mines or expand existing ones.

“Engaging in the extractive industry isn’t moving forward, it’s not going to help in the long run. It’s part of capitalism,” Aubrey said. “It is not helpful…We see throughout the extractive industry on Turtle Island it’s linked to violence against women. It’s so nuanced and interconnected that you cannot speak on one without speaking on the other.”

Women on the panel maintained that due diligence must occur continuously through development projects, not just during the initial phases. But ultimately, they say, society needs to divest from the extractive industry altogether.

“Indigenous people are providing the answers,” Aubrey said, referencing traditional knowledge and science. “We understand how to live symbiotically with the environment. How to feed people. We already have systems in place that will protect us and the world.”

She added that corporations and financiers need to recognize that and be engaged in those principles and strategies. The panel called out BlackRock, the world’s largest asset manager, saying the investment company has an insatiable appetite for feeding its bottom line. BlackRock presently does not have an Indigenous rights policy, a shortcoming that Women’s Earth and Climate Action Network founder Osprey Orielle Lake said should change immediately.

Like countless others during the first week of the Permanent Forum, the panel consistently returned to the matter of free, prior and informed consent (FPIC). FPIC specifies that developers must engage with impacted Indigenous communities to ensure their participation and consultation. However, despite the international human rights principle being widely adopted by U.N. member states via the Declaration on the Rights of Indigenous Peoples, many experts and leaders have identified that the articles are not being recognized or applied effectively, leaving the land and people vulnerable to exploitation. Among the other solutions highlighted, included investing in climate justice frameworks that center traditional ecological knowledge.

For women like Maria Violet Medina Quiscue, from Pueblo Nasa in Colombia, it takes courage to speak out on these issues – especially on a global scale – because land and human rights defenders are being murdered, meaning that publicly criticizing the institutions, corporations and nations behind them places her life on the line. Quiscue described the deeply entrenched racism against Indigenous people in Colombia, which has been on full display as of late.

For the last seven months, roughly 2,000 Indigenous people have been living at an encampment at Bogota National Park after being displaced by extractive industries and paramilitary groups. Anti-Indigenous rhetoric from Colombian politicians has created a hostile environment for Indigenous people, with grocers and store owners refusing to serve Indigenous people. Quiscue says racism in Bogota ramped up after Mayor Claudia Lopez Hernandez unleashed a slew of attacks against Indigenous people at the encampment.

Quiscue says the discrimination they are currently facing is rooted in colonization. Maria and the other panelists made it clear that Indigenous people maintain both the legal right to say “no” to extraction as well as a sacred obligation to stand up against current and future developments. At an event featuring numerous policy solutions and calls to action, this was the line that the women seeking to hold financial institutions accountable consistently returned to: you cannot be a climate leader when you expand extraction.