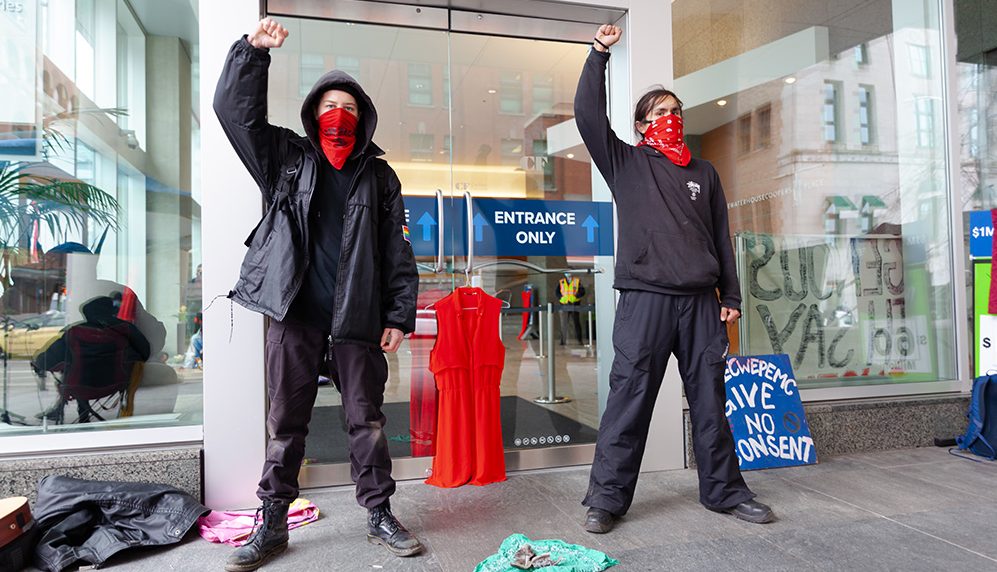 Above photo: ‘We hope that all the insurers will drop out of insuring the TMX pipeline, and that it will fall through as it is not an economically viable or environmentally viable project.’ Katie Hyslop.

A group of Indigenous youth took their fight against the Trans Mountain Pipeline expansion project to the Vancouver offices of insurance companies backing the controversial venture earlier this week.

On Thursday, approximately 20 youth from the xʷməθkwəy̓əm, Skwxwú7mesh, Səl̓ílwətaɬ (Musqueam, Squamish, Tsleil-Waututh) and other First Nations occupied the lobby — as well as south and west entrances — of 250 Howe St., a high-rise building housing Chubb Insurance Co. of Canada, one of 11 insurers backing the pipeline project.

About half of the young people conducted a sit-in inside the building lobby, where they hung red dresses and banners. The rest stood outside the entrances, where they used additional red dresses — which have come to symbolize missing and murdered Indigenous women and girls — to tie shut the door handles of two main entrances.

A shelter set up in front of the south entrance featured a Rotisken’rakéhte or Mohawk Warrior Society flag, more red dresses and a banner that read, “Stop Insuring Genocide,” referring to both the environmental destruction associated with the project, as well as the link between violence against Indigenous women and girls and so-called “man camps” that typically house industry workers.

The 11 companies currently insuring the Trans Mountain Pipeline expansion project to the tune of US$508 million are set to renew their involvement with the project this summer.

Last year, Germany’s Zurich Insurance Group, Munich Re Group and Talanx Group all declined to renew their backing of the pipeline after facing similar protests worldwide since 2019.

Zurich had been one of the project’s biggest backers, covering the initial US$8 million in any insurance payouts the expansion project would have to make.

The Tyee contacted Chubb for comment but has yet to receive a response.

On Wednesday, the same young protestors occupied the lobby of 999 West Hastings St., home to Liberty Mutual Group, which in addition to insuring the Trans Mountain project, also insures the Alberta oilsands and the now-defunct Keystone XL pipeline.

“We hope that all the insurers will drop out of ensuring the TMX pipeline, and that it will fall through as it is not an economically viable or environmentally viable project,” said the protest spokesperson.

“And we’re trying to make sure that this stops going through unceded territory without consent from the local host nations.”

There has been Vancouver police presence at both protests. On Thursday, two Vancouver Police Department vehicles were parked next to 250 Howe St., with officers observing the peaceful protest.

The protestors, who posted videos of Wednesday and Thursday’s protests on Instagram, say there were as many as 15 police officers outside Liberty Mutual on Wednesday.

“They forced about half of us out of the building. And then after that, we had half the group stay inside and occupy the space until the building’s workday was over,” the spokesperson said, adding there was an unsuccessful attempt by officers to arrest some protesters. “We managed to get away from them.”

In an email to The Tyee, VPD spokesperson Sgt. Steve Addison acknowledged the police presence at both protests, but said there were no arrests.

“VPD officers did respond to and monitor protests targeting insurance companies working with the Trans Mountain pipeline. During these events, protesters blocked access and egress to high-rise buildings by tying closed the front doors, occupying the lobbies and blocking other entrances,” Addison wrote, adding the department respects citizens’ right to peacefully protest.

“VPD officers liaised with protesters and building occupants to ensure the safety of all — primarily the ability for people to come and go from the building in the case of emergency. These buildings are private property.”

The protesters say they have plans to protest other corporations backing the Trans Mountain expansion project, but would not say when.