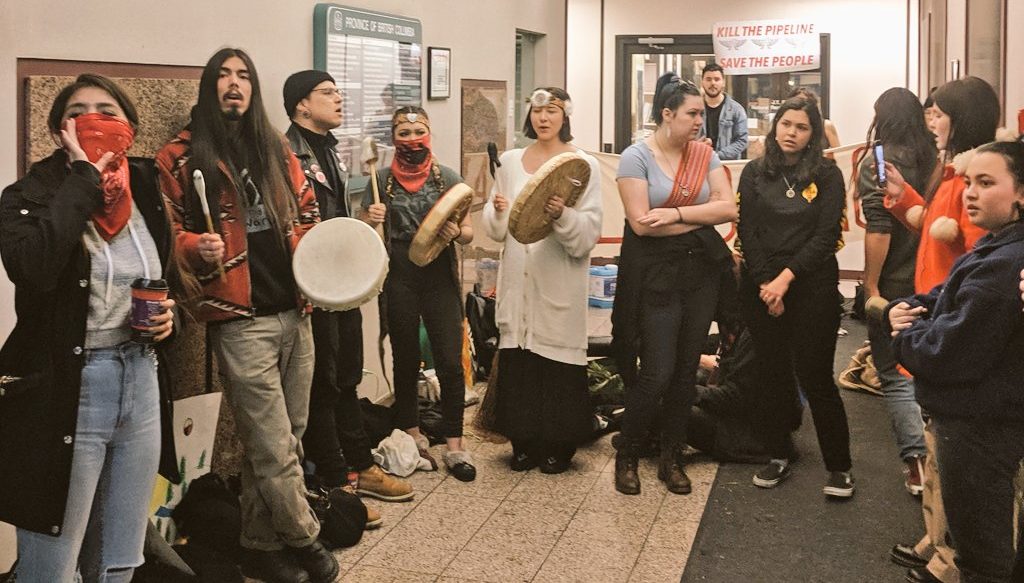 As Indigenous youth we stand with Wet’suwet’en assertion of sovereignty because we understand that Indigenous Peoples will cease to exist without our land; our languages, cultures, and future generations cannot survive without our it. Indigenous youth are not only inheriting a climate crisis driven by fossil fuel projects like CGL, but Canada’s legacy of colonization, genocide, and gendered violence against Indigenous women, girls, and Two-Spirit people. In protecting the lands from industrial development, we are protecting our bodies from violence.

The letter from Indigenous Youth in Solidarity with Wet’suwet’en continues, “Indigenous people defending their lands from destruction are not criminal or disposable. As Indigenous youth, we urge you to uphold Indigenous rights and Wet’suwet’en law by advocating for the removal of CGL and RCMP from Wet’suwet’en territories.”

The letter delivered by the youth to the MLA included a list of four demands made by the Hereditary Chiefs of the Wet’suwet’en Nation. The demands include: that the province cease construction of CGL’s pipeline and suspend all permits for the project; that UNDRIP and free, prior and informed consent are respected by the government and the RCMP; that the RCMP and associated security services be withdrawn from Wet’suwet’en lands; and that all levels of government, RCMP, and CGL respect Anuk nu’at’en (Wet’suwet’en Law) and refrain from using force to access the territory or remove Wet’suwet’en people and their supporters.

Over 45 international actions in support of the Wet’suwet’en Nation have taken place so far in 2020, including actions in Montreal, Ottawa, Hamilton, Halifax, Aotearoa/New Zealand, Seattle, Portland, San Francisco, and New York state. Statements in support of the Wet’suwet’en have been issued by the Union of BC Indian Chiefs, numerous Nations, academic institutions, youth groups, anti-poverty groups and others. The United Nations Declaration on the Rights of Indigenous Peoples (UNDRIP) was legislated by the province in November, 2019. Additionally, the BC Human Rights Commissioner and the United Nations Committee on the Elimination of Racial Discrimination (CERD) have called for a cease to construction and the immediate withdrawal of the RCMP.

The Canadian government cannot continue to ignore these actions while also claiming commitments to reconciliation and climate action. It is long past time that Canadian politicians no longer perpetuate Canada’s shameful status quo in relation to Indigenous rights and instead respect our sovereignty as Indigenous Peoples. That is the minimum.