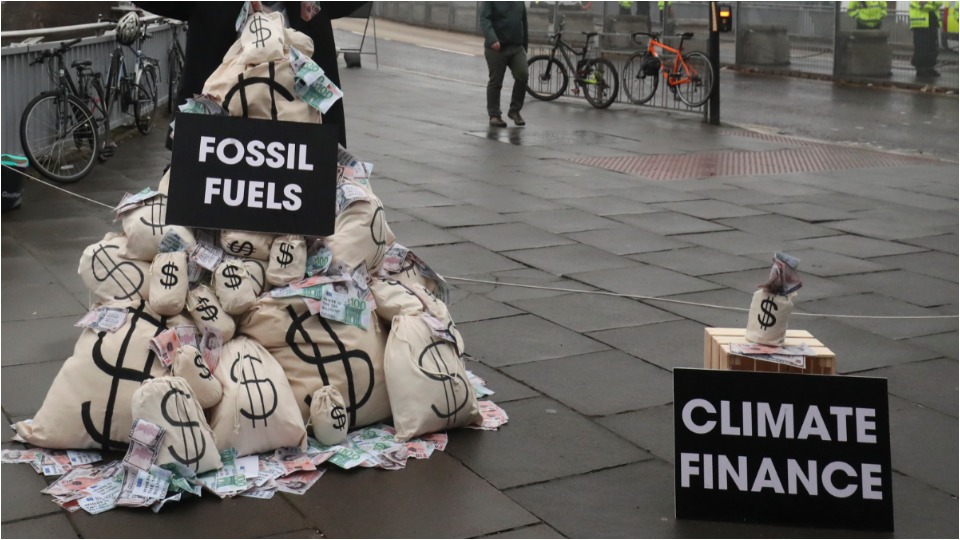 Inaction on the climate crisis is to be expected when capital is valued more than humanity.

The cataclysms of the interlinked crises of COVID and climate change were elucidated this past year in ways that cannot be repudiated. Following the release of the International Panel on Climate Change’s (IPPC) most recent report on the state of global warming, UN Secretary General, Antonio Guterres characterized it as, “a code red for humanity .” In short, the report found that absent immediate and decisive measures to address planetary warming, the worst-case scenarios of climate change will be soon realized for both the physical environment and the social systems that depend on it. These admonishments should have made the 26th annual Conference of Parties (COP) climate summit, held this year in Glasgow, Scotland, a proverbial come to Black Jesus moment for the world. Unfortunately, yet not surprisingly, the conclusion of the COP and its emerging agreement leaves much to be desired and 100s of millions of lives hanging in imbalance.

The planet is already 1.2 degrees Celsius warmer since the Industrial era commenced – an increase of 2.0 degrees will render the planet all but inhabitable, while an increase of 1.5 degrees will unleash immeasurable suffering for the most vulnerable, especially those living in, so called, developing nations. As Barbados Prime Minister, Mia Mottley, proclaimed at the start of this year’s COP, “For those who have eyes to see, for those who have ears to listen and for those who have a heart to feel, 1.5 is what we need to survive.” Representatives from other less-industrial nations shared Ms. Mottley’s concerns and demands for action as they understand that those most impacted by record heat waves, droughts, wildfires, and increasingly powerful storms are residents and citizens of nations least responsible for the world we find ourselves in today.

The climate gap, defined as the disproportionate and unequal impact the climate crisis has on people of color and the poor,  is an issue of great importance for human rights, public health, and socioeconomic equity because of its diverse consequences overall as well as its disproportionate impact on vulnerable and socially marginalized populations (Shonkokk, Morello-Frosch, Pastor, Sadd).  And while this concept is typically discussed solely in a U.S. context, as Black people we understand that this is an issue with global implications that affects the lives of African and Indigenous peoples on every continent of the planet.

This sentiment was not shared by Industrial nations at COP 26, and the proof is in the anemic and inadequate agreement that was forged, literally, during the final minutes in closed door meetings that did not include those most impacted by a crisis largely engendered by the colonizing nations that fossil fueled their economies on the backs and resources of nations they pillaged and continue to suppress through nefarious bodies like the World Bank and International Monetary Fund (IMF). Nonetheless, as anticipated, certain world leaders emerged from the summit’s conclusion claiming the agreement would, “send a powerful signal to capitals and corporate boardrooms around the globe that more ambitious action on climate change is inevitable.” A signal was sent, but that signal was more along the lines of, “we can maintain runaway capitalism, at the expense of developing nations, and still address the quintessential crisis of our time.”

The science of climate change is pretty simple – we must reduce greenhouse gas (GHG) emissions drastically and expeditiously while leaving 80% of remaining fossil fuel deposits where they lay underground if we have any chance of averting the 1.5-degree threshold.  To put this into perspective, this would mean Big Oil cartels and the nations emboldened to them would relinquish the equivalent of $22 Trillion globally. Industrial nations know this better than anyone, which is why at the end of the day semantics and doublespeak in lieu of enforceable limits on GHG emissions plagued yet another COP summit. For instance, when considering the need to end government subsidies for fossil fuels, especially coal, the language of the agreement was switched from “phase out,” to “phase down.” And while this language change was publicly attributed to India, the United States, which provides an estimated $22 billion annually in fossil fuel subsidies is culpable and certainly not beyond reproach. The tentacles of U.S. influence and coercion was present in every decision made at the COP.

There were more agreements on how to profit from emissions through feckless and unproven carbon dioxide markets, including so called carbon offsets, than agreement on how to preserve and protect developing nations like Nicaragua who have more renewable energy online at 58% than most if not all so called Industrial nations, including the U.S., which generates a paltry 12.6 of its energy from renewable sources. This is important because a decade ago, the world’s wealthiest nations pledged to allocate $100 billion per year to assist developing nations with financing climate action including resiliency and efforts to utilize renewable energy sources. To date, little to none of that money has been distributed forcing some African nations to dedicate nearly 10% of their GDP on climate adaptation, which addresses only 1/5 of their needs to protect their citizens from a crisis they did not create.  And even when developing nations formed an ad hoc committee to discuss a specific stream of funding to assist them with recovery efforts from climate-fueled disasters, wealthy nations blocked this proposal agreeing to, “initiate a dialogue” at future climate summits.

COP 26 proves that developed nations prefer profits over people – people who are no longer available to be treated as property nor, subsequently, be instruments in the generation and maintenance of wealth for the global white minority. Therefore, developing nations no longer have a choice than to engender an inexorable bloc and bring the global economy to a halt by rendering their resources unavailable until Industrial nation come correct on the climate crisis.

After all, while developing nations may not be wealthy, they are certainly rich [in resources], and they have the power to push for enforceable parameters in all climate agreements moving forward. Sanctions are commonly imposed on nations that allegedly attempted to steal elections, so why won’t we push for penalties on nations that are actively stealing our collective future, especially for young and unborn folk?  The reason is simple, those sanctions would cost the US empire, the largest historical emitter ever, a bunch of money and force it to release its grip on runaway capitalism. That move, while necessary, necessitates the conclusion of the U.S. empire, and  there are simply too many forces at play unwilling to relinquish imperialism and economic colonization.

We won’t be able to lower emissions until we are able to lower white “supremacy,” that is, until we extirpate the feckless notion that climate justice can be obtained within a circumference of capitalism. Developing nations, the world over, have more power and influence than they may realize. To this end, it would behoove them and their allies in respective diasporas to muster a modern day Bandaug Conference in an effort to determine how to best use their collective natural resources as a form of power and defiance against the wealthiest nations who, in the words of Thomas Joseph, member of the California-based Hoopa tribe, “signed a death a sentence,” for those most vulnerable to the climate crisis.

We must never forget the sage words of former Premier Zhou Enlai, who led the Delegation of the People’s Republic of China during the 1955 Bandaug Conference, “Our voices have been suppressed, our aspirations shattered, and our destiny placed in the hands of others. Thus, we have no choice but to rise against colonialism. We need to develop our countries independently with no outside interference and in accordance with the will of the people.” Truer words have not been uttered – the fate of the world is not in the hands of the colonizers, it’s in the hands of the people of the global majority who must come together in vindicating James Baldwin who reminds us, “We are responsible for the world in which we find ourselves, if only because we are the only sentient force which can change it.”