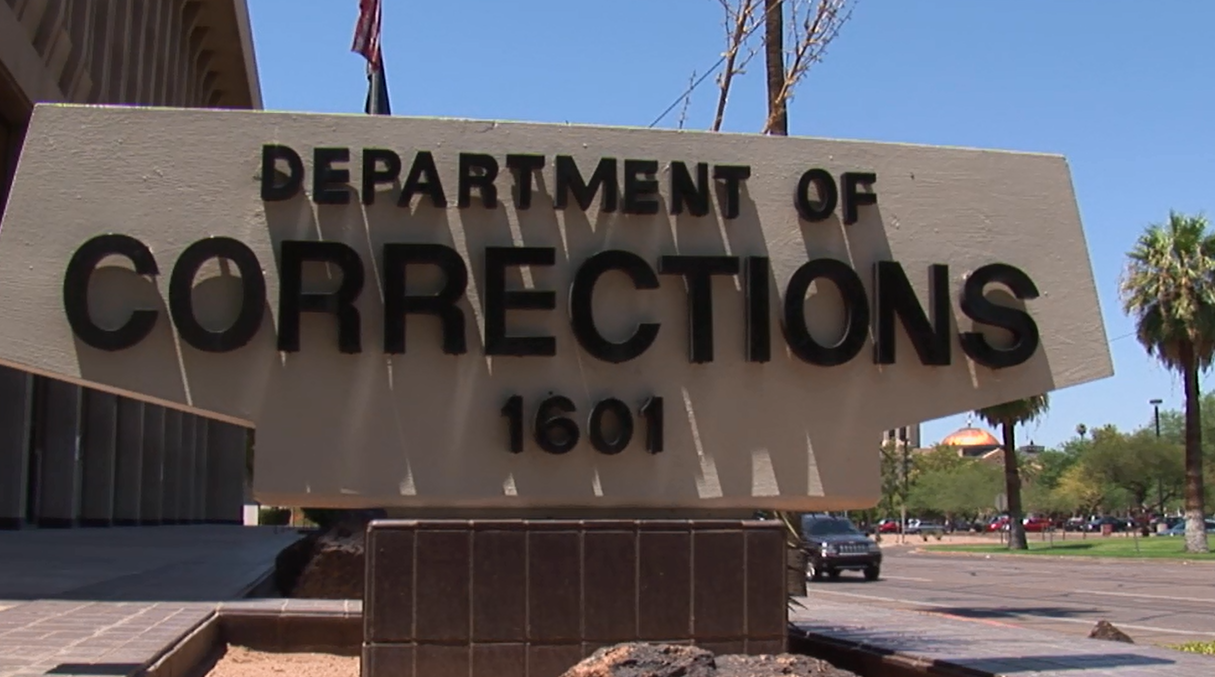 Above photo: Arizona Department of Corrections building in Phoenix.

Arizona – Incarcerated people who work in the kitchens at the Eyman, Lewis and Yuma state prisons claim they were forced to serve expired meat to their fellow inmates, resulting in foodborne illnesses.

Several inmates report being diagnosed with H. pylori infections, which they attribute to the food and unsanitary conditions in the kitchens. The inmates say they were subsequently put on antibiotics in recent days and weeks to treat the infections.

KJZZ is not naming the inmates because they fear retaliation for speaking out about the prison conditions.

An inmate who works in the kitchen in the Cibola unit of the Yuma prison said they had been forced to cook with expired meat for over a month. “It was well past the expiration date on the label,” the incarcerated person said. “The only meat we use is mechanically separated chicken. When you open the box, the meat usually has a green layer on it.”

The inmate said they don’t believe the meat is safe to eat. “It comes in 30-40 lb bricks with labels saying ‘Not For Human Consumption.’”

At the Lewis prison, an inmate kitchen worker said they have been forced to cook with a meat product the inmates call “pink slime” that expired in 2016. Several inmates complained that recent deliveries of processed chicken parts smelled like fish.

The Arizona Department of Corrections contracts with Trinity Services Group to conduct all food and concession operations in state prisons. Victor Rendon, Trinity’s regional vice president, confirmed some of the complaints from inmates regarding the quality of the food.

“We did recently receive a batch of frozen chicken that we received from an outside vendor that, upon arrival, gave off a strange odor,” Rendon said. “The labels suggested the food was still well within the serve date, but was promptly returned based on the smell test alone. From time to time, we, like any restaurant or cafeteria, will receive food that either looks or smells slightly peculiar and, as always, we return it immediately.”

Rendon did not refute the recent claim from inmates about the packaging on the meat products, saying it had happened in the past.

“Regarding your inquiry about boxes labeled ‘not for human consumption,’ this did indeed happen more than 20 years ago at one of our facilities due to food arriving in recycled boxes,” Rendon said. “Despite the fact it was a mislabeling issue, ALL the contents were returned to the vendor and the product never made it inside the kitchen.”

Several inmates said the dishwashing machine for the Cibola unit at the Yuma prisons was broken and not functioning, resulting in unsanitary conditions.

“The machine that is supposed to clean our plates and cups and sporks does not and has not worked properly for months,” an inmate kitchen worker said. “Instead of administering the proper cleaning and sanitizing chemicals, the CO has to unlock the bleach and soap so inmates can throw unmeasured amounts into the machine.”

A different kitchen worker at Cibola made the same complaint. “The dishwash machine for the trays has been broke for several months now and many of the guys here have got a bacterial infection in the stomach,” the worker said.

The same inmate noted conditions in the kitchen were generally unsanitary.

“There is also cockroaches on every serving surface as well as in the wall that has empty electrical outlets,” the inmate said. “Flies are also on all surfaces.”

“There was a dishwasher that started to malfunction on Oct. 21 and was fixed Nov. 13; it was the result of a faulty gasket that had to be ordered to correct the issue,” Rendon said. “The problem resulted in dishes not being properly exposed to the sanitizer inside the machine during the final part of the cycle. The interim fix, to ensure no delays to meal service occurred, was to place all dishes and cutlery in a sanitizer solution as well as to hand sanitize them once the dishwasher finished its cycle.”

Regarding the claim of roaches and flies in the kitchen, Rendon said Trinity and the department implement several layers of inspections and protections against pest control.

“There has been no meat with an expiration date of 2016 found in any of the Yuma kitchens,” he said. “All kitchens were searched on 11/13/20 and no expired meat was found. There have been no reports of expired meat in the kitchens.”

But after KJZZ initially contacted Trinity and the department with the inmates’ claims, kitchen workers in several prisons said Trinity workers visited the kitchens and warehouses on Department of Corrections property and purged large quantities of expired food.

A kitchen worker at the Lewis prison said they were directed to throw out several pallets of the “pink slime” meat product that had expired.