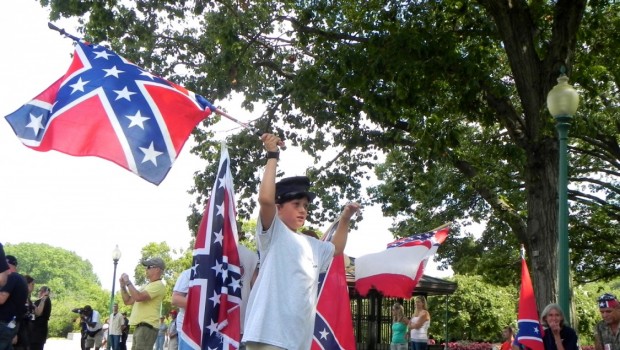 Inside A Pro-Confederate Flag Rally

Above photo: 11-year-old Andrew came with his family from Massachusetts to participate in Saturday’s Confederate flag rally. Credit Alice Ollstein.

Washington, DC – More than 1,300 people were expected to attend a “Southern Heritage” rally in support of the Confederate flag on Saturday in front of the U.S. Capitol. Fewer than 50 showed up.

In the wake of this summer’s horrific murders of nine black churchgoers — committed by a manwho admired the Confederate flag — universities and state governments have faced heated calls to remove the flag from their public spaces. In response, many have taken down the symbols, prompting fierce backlash including pro-flag rallies in Alabama, Georgia, and now Washington, D.C.

In interviews with ThinkProgress, members of the small crowd said they wanted the U.S. government to hear their messages: preserve Confederate symbols, and squash the Black Lives Matter movement.

“This Black Lives Matter bull is racism that the government don’t see. It’s white genocide propaganda. They’re pushing folks to shoot cops and white people,” said Ron Feathers from Elliston, Virginia. Behind him, the crowd waved flags, let out “rebel yells,” and showed off their Confederate tattoos and belt buckles.

This Black Lives Matter bull is racism that the government don’t see.

Looking across the park at a cluster of anti-Confederate protesters — who far outnumbered his own group — Feathers added: “If Robert E. Lee was alive today, this shit wouldn’t be going on. That’s when we had a true American in office.”

Feathers, a self-identified Democrat who believes President Obama is planning to declare martial law and “rule the whole world,” said he’s been organizing “flag rollings” across Virginia — where people drive together with Confederate symbols on their cars — to push back against those he feels are “taking [his] history away.”

Unprompted, Feathers offered his thoughts about why “colored people in general” have a “ghetto lifestyle.”

“It’s because their daddies ain’t in the picture. All these kids are latchkey kids. They’re not being taught the right way. And they only do things in groups. They’ve got so much hatred.”

When DC artist and activist Sima Lee — who is black and indigenous — approached Feathers and yelled at him to get the Confederate flag out of her city, he repeatedly called her “babe” and told her, “Go back to that side where you belong.”

Though Feathers and other pro-Confederate demonstrators repeatedly prefaced their remarks by telling ThinkProgress they are not racist, several expressed anger at the Black Lives Matter protesters across the park.

Look at the person standing to your left and right. That is the Confederacy. We are it.

“I am restraining myself because I am a southern belle,” said Ginny Meerman, a beauty pageant consultant and former “Mrs. Maryland” winner who sported a Confederate flag tattoo across her upper back. “But bless their little hearts if I got them in a quiet alley somewhere.”

When a group of several dozen local D.C. activists across the park began chanting “black lives matter,” she assured the group: “We are above them. We are so far above them they will never, ever be on the same plane that we are.”

On the other side of the Capitol Hill park, dozens of local activists banged drums, held aloft homemade signs denouncing the Confederate flag, and spilled out into the street, blocking traffic.

Casey Udley, who grew up in Charlotte, North Carolina and now lives in Northern Virginia, told ThinkProgress she came out to demonstrate because she wanted to show that “there is another way to be white and southern.”

“I brought my sweet tea and my signs and I’m here to say that hate may be our heritage, but it doesn’t have to be our legacy,” she said. “It’s important for white people to stand up to other white people and teach what it means to be anti-racist.”

The anti-Confederate demonstrators told ThinkProgress that those waving the Confederate flag were perpetuating racism whether that was their intention or not.

“I feel scared when I see it — genuinely afraid. I wonder what the person holding it thinks of me,” said Winter Brooks, an African-American student at American University. “It’s a symbol of hate, of pro-slavery, anti-blackness, anti-minorities. It’s frightening.”

Though a line of Capitol Police and several hundred feet separated the two protests, at least one protester on the pro-Confederate side expressed fear that something dangerous might happen if the two crowds collided. Jason Berry, a Civil War reenactor from Detroit, said he had wanted to bring his mixed-race 12-year-old child to the event, but decided against it.

“They’re the most racist group there is,” he said, referring to Black Lives Matter.

Berry said he hoped the movement to protect the Confederate flag would continue, particularly among elected officials. When asked if there were any presidential candidates who he thought would protect his beliefs, Berry was enthusiastic.

Here are tweets from a Baltimore contingent who were there to protest the Confederate flag rally:

Got them on the run in Union Station! pic.twitter.com/zS8hwVaoqb