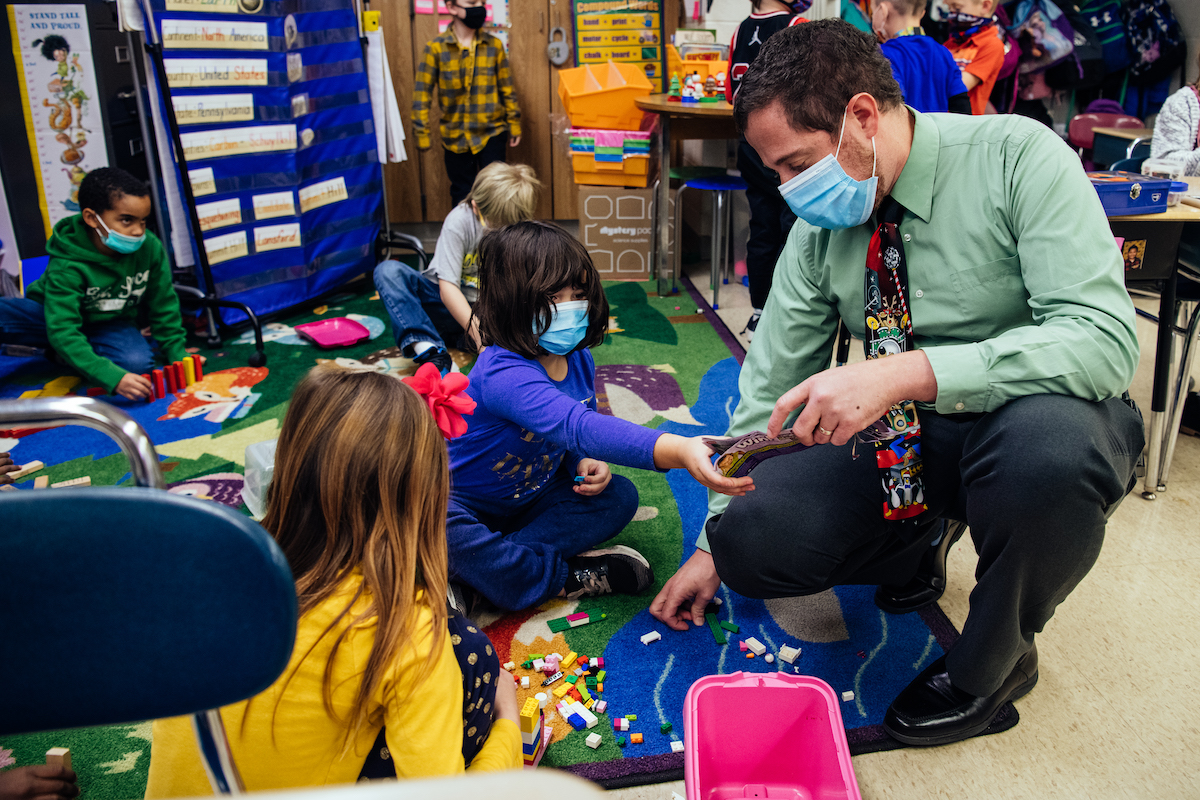 Above Photo: Principal Palazzo kneels beside students building with Legos so they can show him their progress during recess in a first grade classroom. Dani Fresh for WHYY.

‘It’s Like We’re Giving Permission For These Kids To Struggle.’

Just a few minutes into a recent tour of Panther Valley Elementary School, principal Robert Palazzo got word that the kindergarten boys’ bathroom was clogged. Again.

“This bathroom is a source of much frustration,” he said. There’s just one toilet for nearly 80 children, a stark illustration of how desperately the building needs an update.

Palazzo called for a plunger and directed children to another bathroom down the hall.

“Hang on buddy, that’s closed,” he said to a small boy who tried to push through the door.

The Panther Valley School District doesn’t have enough money to renovate this bathroom or fix other physical issues, like a leaky roof and crumbling handicap accessible ramp.

Palazzo is a cheerful guy who clearly loves working with children. If you ever want to feel like a celebrity, he says, become an elementary school principal who gets a haircut. But his positive tone can’t disguise the worry in his voice when he talks about the building where he spends his days.

“Improving the physical structure of the school may not seem like a priority, but it speaks to the overall climate of the school, that we’re learning in a place that needs for so much,” Palazzo said.

The case is currently playing out in Commonwealth Court. School leaders like Palazzo are watching closely, hoping the long-awaited trial eventually directs more money into their struggling districts.

“It’s in the heart of what we used to refer to as the coal region of Pennsylvania,” said the district’s superintendent, David McAndrew.

As the country moved away from coal mining, residents lost work. Now, jobs are hard to come by.

Fifty-six percent of children in the district are classified as economically disadvantaged, though McAndrew believes the figure is closer to 70%.

“We have very few businesses,” McAndrew said. “The businesses we have, unfortunately, seem to be leaving us.”

One of the community’s main employers, a plant that makes fire trucks, is closing this spring and relocating its operations to Florida.

“Approximately 300 employees are out of jobs, and many of those employees have kids in our schools,” Palazzo said.

When businesses leave, Panther Valley also loses part of its tax base, pushing the already cashed-strapped district closer to the brink.

Like districts across the Commonwealth, Panther Valley relies heavily on local taxes to fund its schools. Pennsylvania ranks near the bottom, nationwide, in the percent of education funding that comes from the state.

It’s one of the statistics at the heart of the funding lawsuit; Plaintiffs say this model creates some of the widest spending gaps between poor and wealthy districts in the country.

“The well’s dry now,” he said. “We can’t keep going to the same group of people.”

He said the community’s tax base shouldn’t determine the type of education its children receive.

“Where we’re located shouldn’t mean that we don’t have resources for our kids,” McAndrew said. “Just because we don’t have land for warehouses and major corporations, doesn’t mean we shouldn’t have guidance counselors, assistant principals, more teachers, more paraprofessionals.”

A Cascading Effect On Learning

The lack of resources shows up almost everywhere in Panther Valley Elementary School, from the mold climbing up the outside of the building to the large kindergarten classes.

Enrollment is up this year, but there isn’t enough money to hire more teachers, so there are currently 28 children in each class.

That high student-teacher ratio is especially troubling in a district like Panther Valley, Palazzo said. Many kindergarteners are already behind their peers on the very first day of class.

Only about 30-40% of incoming students have attended pre-K, he said. There aren’t many programs in the region.

“All these skills and these deficits are things that we’re trying to work on before we are able to move into what would be the traditional curriculum.”

From day one, teachers are playing catch up, and starting off behind can have a cascading effect.

“Maybe we could catch them up to a mid-kindergarten level by the end of kindergarten, so now they’re entering first grade behind,” Palazzo said. “That’s what we’re up against, and then COVID on top of that has really compounded the challenges.”

“These kids need smaller teacher ratios in order for them to make the progress that the state wants them to make, and there’s no way to do that without more money,” Palazzo said.

There is a bright spot this school year. The district received state funding to start its own pre-K program.

Palazzo stepped into a classroom with a soft green rug, colorful blocks stacked high. It’s where Panther Valley’s very first pre-K students are developing those critical skills that will help them succeed in kindergarten, like learning to play cooperatively and regulate their emotions.

Palazzo is thrilled with this new program and wants to see it grow. The school currently serves 19 pre-K students, just a small fraction of the children who will ultimately enroll in kindergarten. (This year’s class has 170 students.)

But even if the district received more state funding to expand pre-K, there wouldn’t be space for the students: The building is at capacity.

Even in positive situations, “there’s always some negative for us, one more hurdle for us to be successful,” McAndrew said. “Other schools, they have some money to maybe build a pre-kindergarten center or rent a place, but we don’t have the funds to do that.”

Still, they’re committed to clearing those hurdles. Palazzo said he’s looking to see if a partner agency might be willing to buy a vacant building, to house an expanded pre-K program.

“Everything we do is kind of a workaround,” he said.